Even as tablet manufacturers continue to pour their time, money and energy introducing new models to the market, the global demand for such devices remains weak for now, and if the latest research report from Digitimes Taiwan is anything to go by, it’s likely to remain that way in the foreseeable future. According to the publication, tablet shipments during the second quarter of this year declined 13.2% YoY to just around 40 million units worldwide, with lower demand across the board. Whether Wi-Fi-only tablets or voice-calling tablets, 2-in-1 devices or just regular plain vanilla slates, the lack of consumer interest hit every single category of the market hard during the quarter.

Add to that the shortage of key components like display panels, memory and processors, and the manufacturers had a Q2 they’d rather forget. While the big brands saw their sales fall significantly during Q2 2016, white-box manufacturers suffered the most, with their combined shipments dropping to a new low of 13.8 million units during the period. With no relief in sight, the large-scale exodus of independent design houses (IDH) from the industry continued unabated, and in fact, gained momentum during the quarter. Shipments of inexpensive slates from tier-1 vendors also declined 7% sequentially with overall shipments reaching barely 16.98 million units. According to Digitimes, much of that can be attributed to the lack of “product differentiation, number of models, and price competitiveness” compared to last year.

Coming to the manufacturers, Samsung Electronics remained on top during the quarter, but Amazon continued on with its stellar performance, climbing to the second spot after Samsung. Lenovo and Huawei came in at numbers three and four respectively. Meanwhile, it’s not only Android vendors who suffered during the quarter. Apple and Microsoft have also seen reduced shipments of their iPads and Surface tablets in Q2 2016. The news wasn’t any better for Taiwanese ODMs either, with all of them combining to ship just 13.52 million units during the period. While that represents a new low for Taiwan-based contract manufacturers, the largest and most well-known amongst them, Foxconn and Compal Electronics, both managed to better their own shipment figures from Q1 because of what Digitimes calls “stable orders from US-based clients”. Tablet shipments have been on a decline for several quarters now, and it remains to be seen if the market can recover going forward. 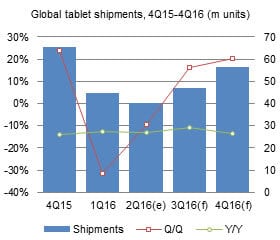