According to the latest data now coming in from Gartner, Android has extended its worldwide lead over the other operating system (OS) options, compared to this time last year. Gartner note that by the close of business for Q2 2016, Android’s market share for worldwide smartphone sales stood at 86.2-percent. This is in contrast to the 82.2-percent Gartner note for the end of Q2 in 2015. As to be expected, iOS followed in second place although in contrast to Android, iOS market share dropped over the two periods, down from 14.6-percent to their Q2 2016 total of 12.9-percent. A behavior which was akin to both Windows and BlackBerry with Windows dropping from 2.5-percent in 2015 to 0.6-percent in 2016 and BlackBerry dropping from 0.3-percent down to 0.1-percent. Likewise, the ominous ‘others’ also declined down from 0.4-percent to 0.2-percent.

In short, Android seems to be the only OS that is showing a marked improvement over Q2 2015. While the fall in other OSes could be seen as a fall in the market as whole, it is worth pointing out that Gartner note that Q2 2016 saw an improvement in worldwide sales over the two compared periods. According to the data, Q2 2015 worldwide smartphone sales totaled 330 million. A figure which is now stated to be 344 million for the same period in 2016.

Moving beyond the wider OS situation, within Android, Gartner also points to the performance of various smartphone manufacturers. Likely to be expected, Samsung tops the pile and also saw a year-over-year market share increase with their Q2 2015 market share increasing from 21.8-percent to Q2 2016’s 22.3-percent. Huawei (who came in third) also saw an increase up from 8-percent for Q2 2015 to 8.9-percent for Q2 2016. Oppo increased their market share quite dramatically moving from 2.4-percent in 2015 to 5.4-percent in 2016. While Xiaomi saw a slight decrease from 4.7-percent in 2015 down to 4.5-percent in 2016. As mentioned, Apple (who came in second overall), saw their market share decrease from 14.6-percent down to 12.9-percent.

As Gartner points out, these figures highlight that overall in Q2 of 2016, Samsung “had nearly 10 percent more market share than Apple”. A rise which Gartner attribute to the success of both the Galaxy A and J ranges, which were able to effectively compete this year with offerings from Chinese smartphone manufacturers. Although as the numbers already suggest, Oppo proved somewhat resilient to Samsung and added significantly to their market share. A result Gartner also points out is in part due to the company carving out “a niche market for itself” with unique features and selling points. 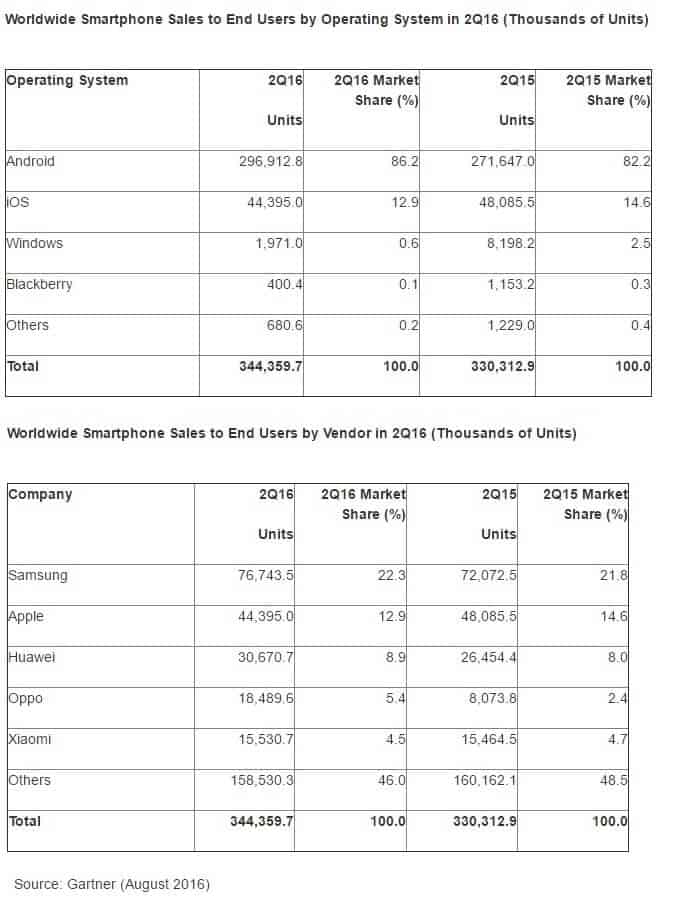