Xiaomi had already introduced quite a few smartphones in 2016, but the most powerful ones are yet to come. The Xiaomi Mi 5 flagship was introduced back in February, and at the time we did not expect Xiaomi to introduce more than one high-end devices before the end of the year. The Xiaomi Mi Note 2 was expected, but not the Mi 5s which is also rumored to be around the corner. Anyhow, The Xiaomi Mi Note 2 rumors have been popping up like crazy, but we still didn’t get a proper leak of this smartphone, at least not recently.

That being said, a new Xiaomi-branded smartphone surfaced on Geekbench, and by the looks of it, this could be the Xiaomi Mi Note 2. The device in question is called Xiaomi ‘Capricorn’, and Geekbench listing confirms that it will be fueled by the Snapdragon 820 64-bit quad-core SoC, the Adreno 530 GPU, and that it will ship with 3GB of RAM (though a 4GB RAM variant is a possibility, of course). Android 6.0.1 Marshmallow will also be a part of this package, and on top of it, you’ll be able to find Xiaomi’s MIUI 8 skin. This smartphone managed to score 2,342 points in the single-core test on Geekbench, while it hit 5,621 points in the multi-core test.

Having that in mind, we did see a number of Mi Note 2 rumors thus far, and it seems like we might get more than one variant of the device. If this is indeed the Mi Note 2, then this might be the base model of the device, mainly considering the fact that the higher-end model is rumored to sport 6GB of RAM and 64GB or 128GB of native storage. The Xiaomi Mi Note 2 is rumored to ship with a pressure sensitive display as well, and its size will be 5.7 inches it seems. The 4,000mAh battery will probably going to be included in this package as well, and it won’t be removable. The 16-megapixel OIS shooter is expected to be this device’s main camera, though there’s a slim chance the phone will sport a dual camera setup on the back. The Xiaomi Mi Note 2 is expected to land at the end of this month, or next month at the latest, we’ll keep you posted. 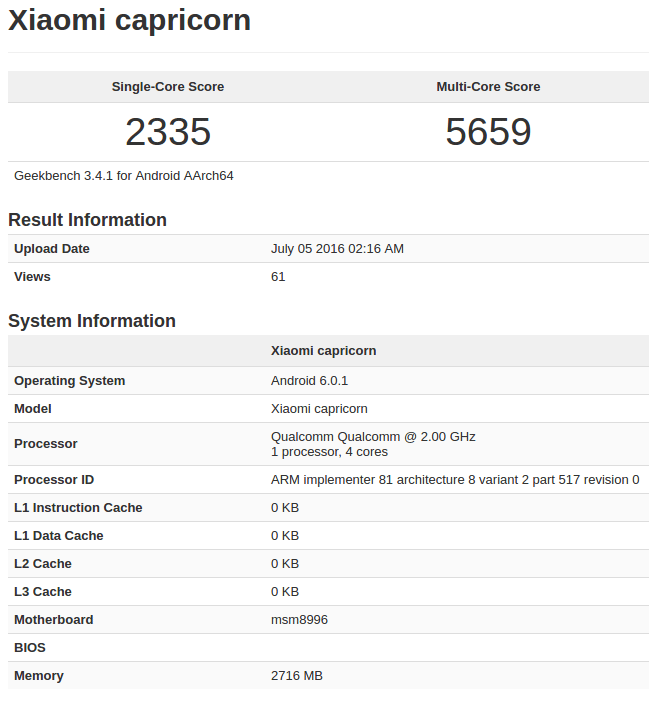