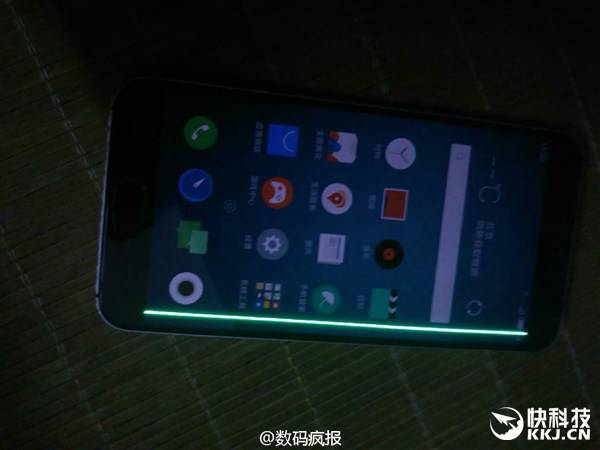 The Meizu PRO 5 was introduced in September last year as the company's quite powerful flagship phablet. The company had introduced the Meizu PRO 6 back in April this year, and that was a significantly smaller device which was fueled by the Helio X25 SoC by MediaTek, compared to the Exynos 7420 which was included with the Meizu PRO 5. Well, we do expect the Meizu PRO 7 to arrive later this year, and judging by the leaks thus far, that will definitely happen. The phone's back side surfaced yesterday, and now we have a real life image of the phone's front side as well. If you take a look at the device, you'll get to see that is sides are curved, well, at least its right side, considering we don't really get a good look at the other portion of the phone due to the poor lighting in the image. Anyhow, this is not the first time such a Meizu PRO 7 design has surfaced, we've already seen this curved smartphone earlier this year, and it seems like Meizu took some hints from Samsung when designing this phone.

The Meizu PRO 7 will resemble its predecessors, but its display will quite probably going to be curved on both sides. The phone will, according to rumors, going to be fueled by the Exynos 8890 64-bit octa-core SoC by Samsung, one of the most powerful mobile chips out there at the moment. The company's exec did confirm a while back that the company is planning to release an Exynos-powered handset later this year, and that more or less confirms that the PRO 7 is on the way. The phone is also expected to pack in 4GB / 6GB of RAM and a fingerprint scanner which will be built into its multifunctional mBack home key.