While there might not be a huge amount of new watches released this Summer, with manufacturers seemingly waiting for the release of Android Wear 2.0 this Fall, there are plenty of great apps and watch faces out there, with more of them being released all the time. This month, we take a look at some great watch faces, as well as apps that should make things a little easier for you, as well as give you some call features to play with. If nothing else, these apps should give users a lot to think about, as well as experience with their new smartwatches over the rest of the Summer. 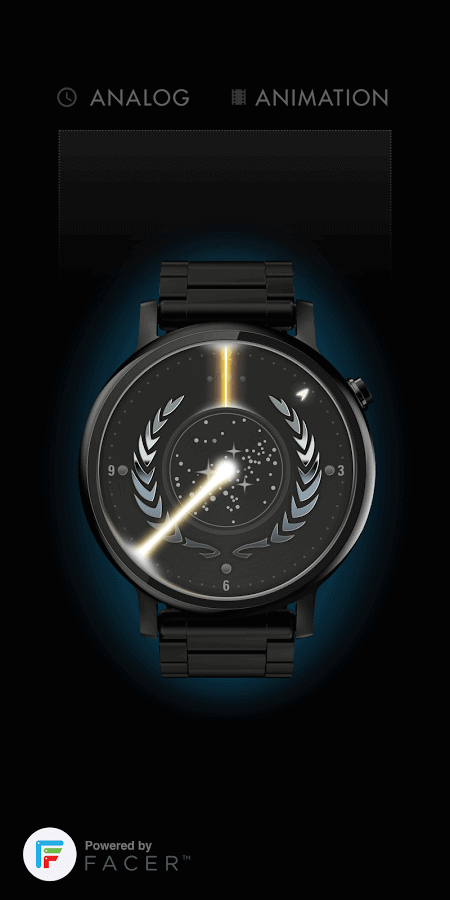 It’s a good time to be a Trekkie right about now; there’s a new blockbuster in theaters, and a new series coming soon, too. The Federation is a watch face that helps fans of the franchise not-so-subtly show off their love for the classic Star Trek series. Maybe it was Deep Space Nine, maybe it was Voyager, whichever your favorite series was, this watch face will help you show off your allegiance and give your watch a little more personality matching to your tastes. 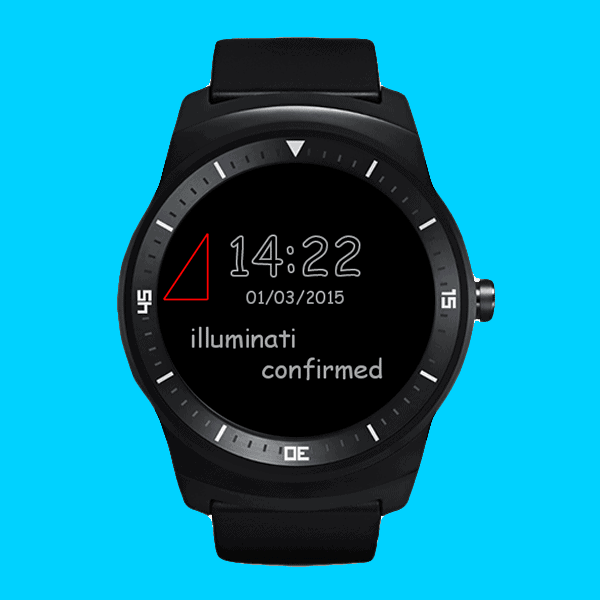 This is the sort of watch face that will appeal to those looking for a little Internet humor on their wrist. The illuminati confirmed joke has been running for years now, and if you’re of a certain age, you’ll think it’s hilarious. This watch face does exactly what you think it does, it tells the time while also lampooning and taking the illuminati jokes one step further. One way of taking the conspiracies with you wherever you want, this is a decent watch face to have installed, and a nice little bit of fun, too. 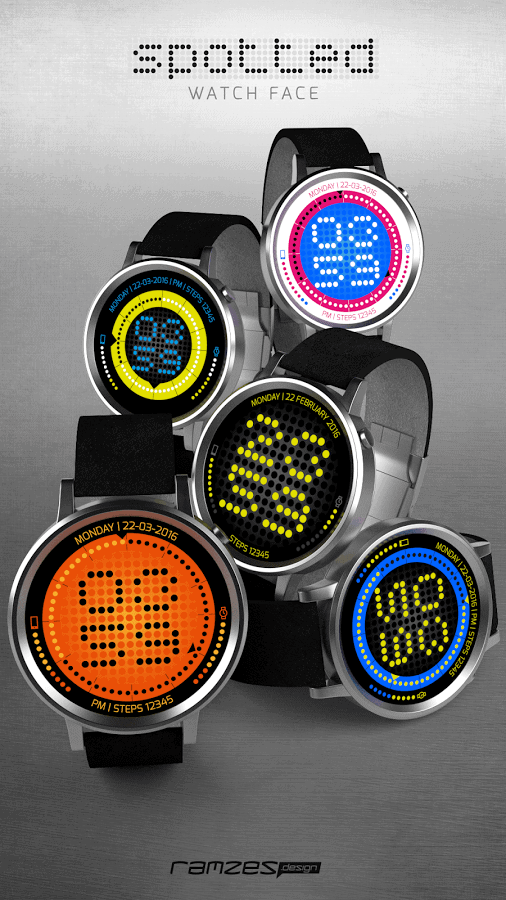 SPOTTED is something that’s definitely for the Summer, and while we might be nearing the end of the Summer by now, there’s always time to put something colorful on to your wrist. Modern in design and colorful to your exacting taste, SPOTTED is a splash of color in an otherwise drab world, and it’s a nice way of getting a watch face that’s both readable and matches that custom watch strap you keep telling everyone about. 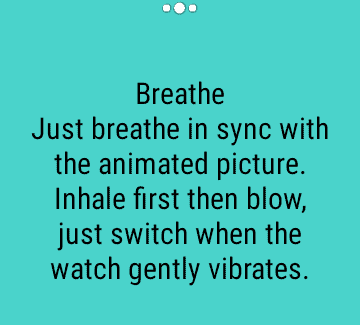 Wearables, including smartwatches, have been long-promised to bring us health benefits and to motivate us to meet our goals. For the most part on Android Wear however, this is focused around workouts or simply tracking your steps and runs. Breath for Wear is an app that aims to offer users a way to relax, an introduction to the world of meditation if you will, by using your watch. Using this app, users are given prompts on what to do with the little screen on their wrist, and it vibrates to prompt users to switch to a new motion or breathing pattern. It’s a neat way of giving users a way of learning something new, without distracting them quite as much as a phone would. 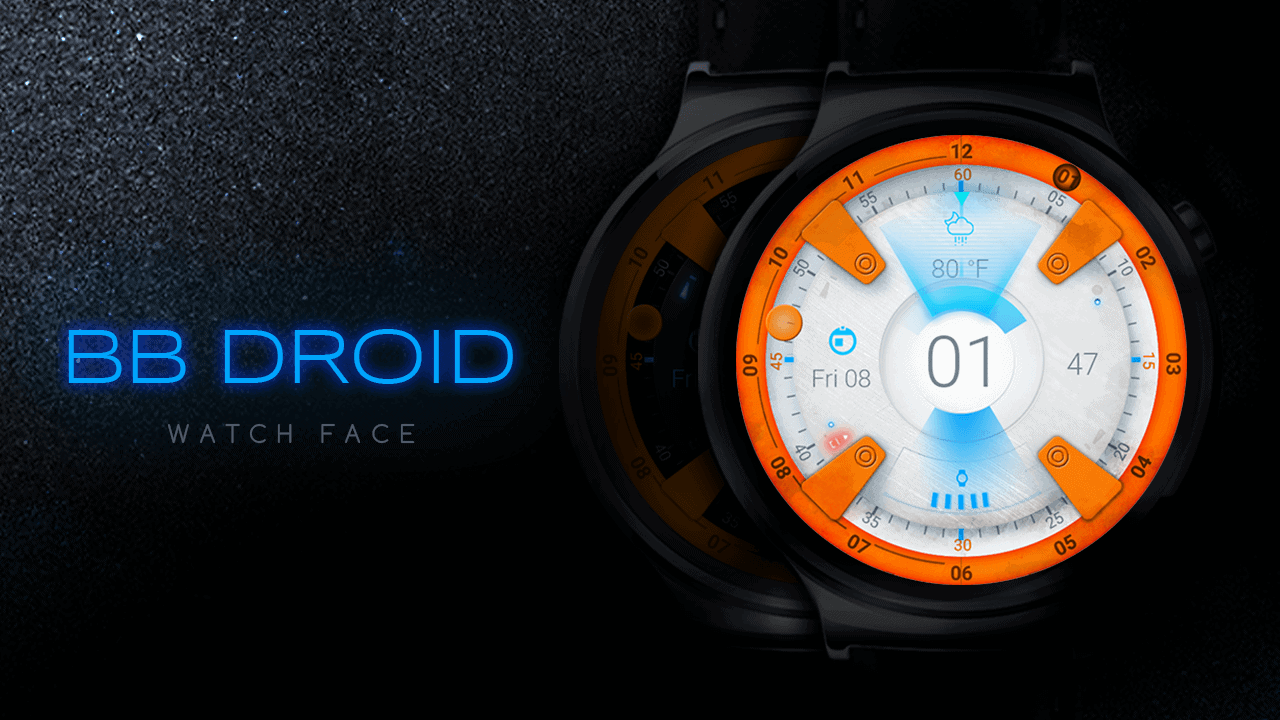 If you’ve always been more of a Star Wars fan, then this is the watch face that you need in your life. Sure, the official Star Wars app has a watch face built-in, but this is a lot more subtle. This takes elements from BB-8’s now-iconic design and turns them into a watch face. It’s undeniably Star Wars, but it’s not in your face, and to the untrained eye will look like just another futuristic watch face, but to your friends in the know, this is a great way of giving a nod to some of your favorite films, without going too far. 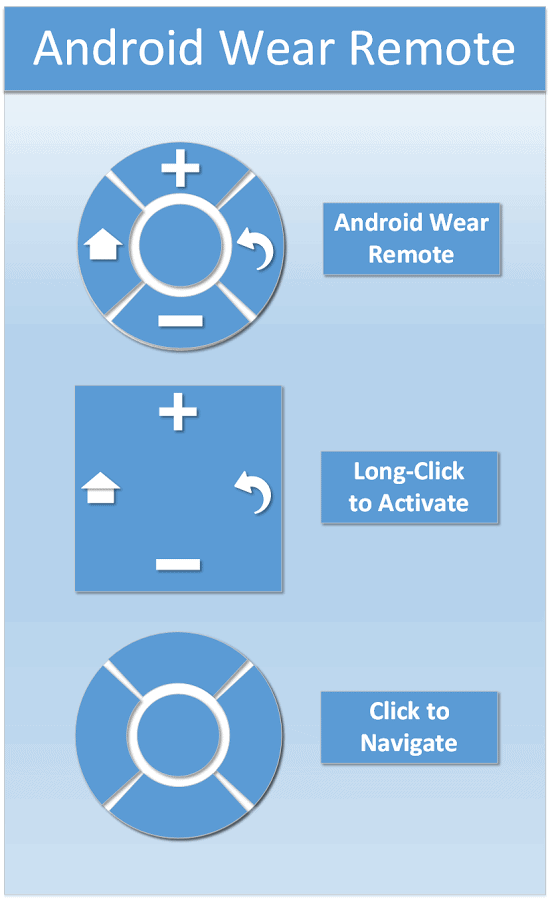 This is one of those rare apps for Android Wear that requires your phone to be rooted, and depending on what type of user you are, this is either a good thing, or a bad thing. Regardless, Wear Remote is an app that does just what you think it does, and it joins the myriad of other apps doing it. It’s a simple app that gives you a D-Pad remote on your wrist, and works with a lot of different apps in the Play Store, this makes it easy to control your phone from your wrist, and is especially helpful if you’re connecting your phone to a display or whatever. Depending on your outlook, this is either a great app or just another gimmick. Still, it’s worth giving a go, at least. 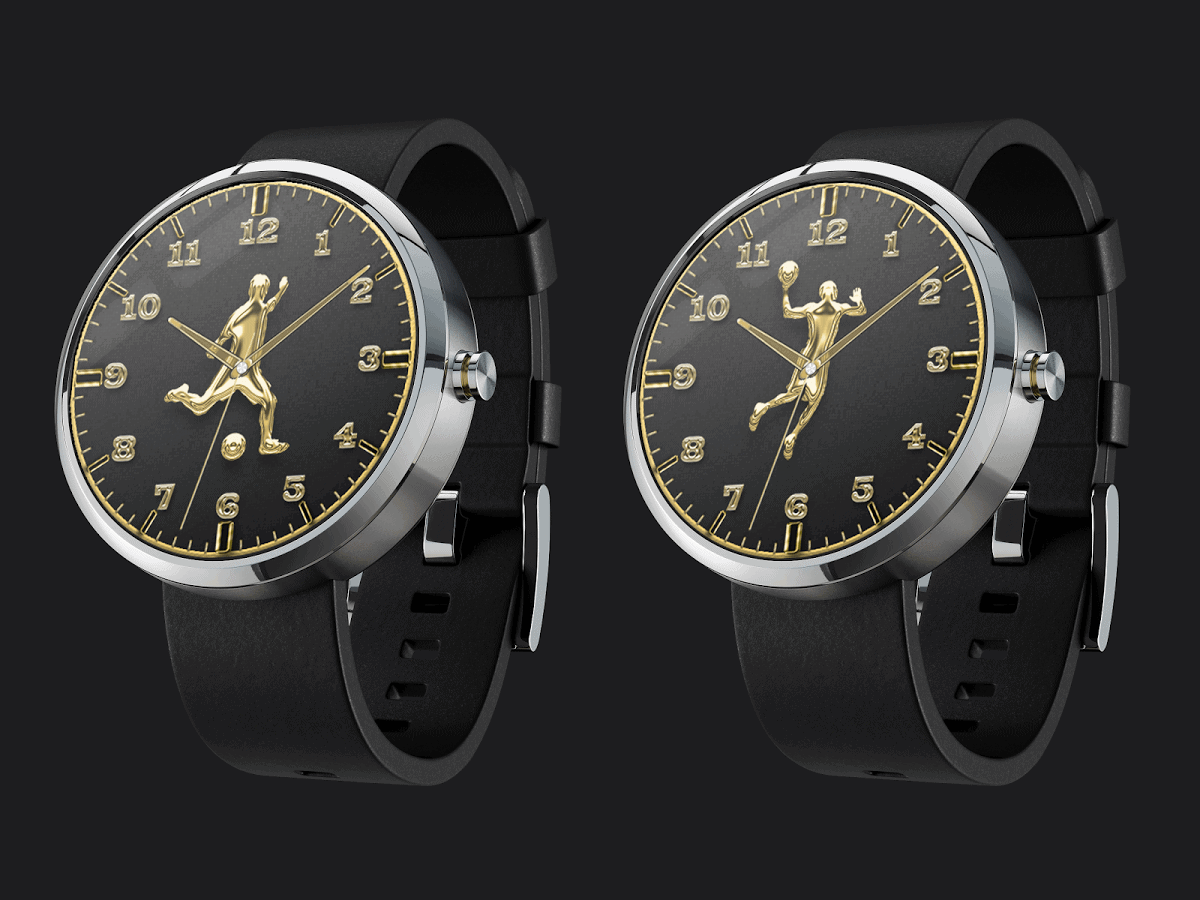 Do you love Gold? Do you like to show off your exquisite taste in precious metals? Well, this is perhaps not the best way of doing that, but it is a pack of some classy-looking watch faces, all focused around a simple-yet-functional analog watch display that blends black and gold together. It might look a little cheesy to some, and there is undeniably a little bit of that here, but it’s worth trying out, and it will be good fun to take a look at. 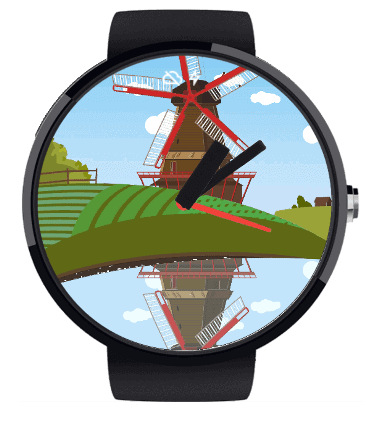 This is a super-simple Android Wear watch face that, as you can tell from both the above screenshot as well as the app’s name, is designed to show you a Windmill. That’s all this app does, it shows you a Windmill on your watch face, with a simple analog watch overlay. This isn’t going to be for everyone, and is really only going to be for those that seem to have “a thing” for Windmills. Still, it’s nice to imagine a Windmill off in the distance, right? 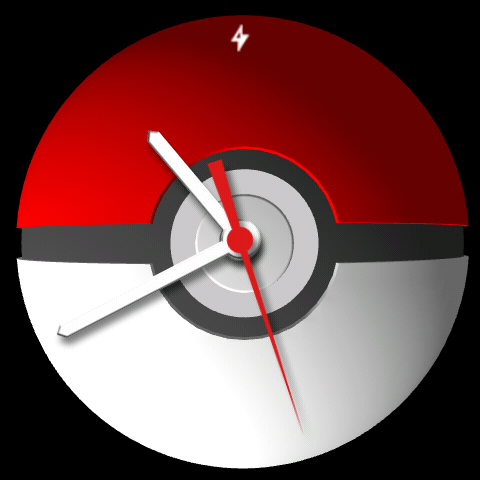 Perhaps you didn’t grow up in the nineties, perhaps you didn’t have a Game Boy and perhaps you just don’t care about small creatures caught in plastic balls against their will. If any of those is true, then this watch face is not for you. If however, like millions of other people all over the world, you’ve been obsessively playing Pokemon GO on your smartphone, then this is the watch face that you’ll want to have on your watch. It depicts a classic Poke Ball, lovingly rendered in 3D, with a fairly readable watch display, too. If only this could be used as a Poke Ball in Pokemon GO when you inevitably run out of Poke Balls…again. 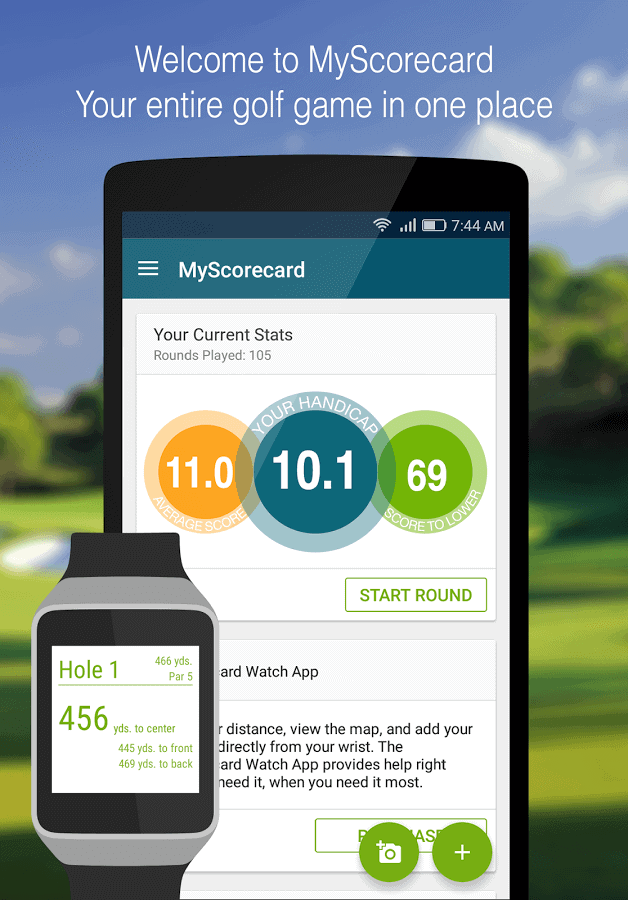 While not an especially new app, MyScorecard is a great app for those that enjoy a game of golf. It has a great and in-depth smartphone app, but it now also has a great way of updating your scores and such from your Android Wear smartwatch. This makes it easier to keep a track of your current game, without annoying your fellow golfers by getting your phone out all of the time, and it also makes that smartwatch on your list a little bit more useful. Worth a download, this is one golf app not to miss.