Crowd's Feed is an Android app that wants to connect users of common apps with each other, creating a social media network around their common interest for the ESPN app, for example. How Crowd's Feed does this is via the floating icon that appears when you're using one of your favorite apps, tapping this floating icon will then take you to a community formed around this app. Crowd's Feed is an app that's just getting off of the ground, and while it has some way to go, it has a lot of potential. The main aim is to create a single social media chatroom around each individual app, and we'll try to find out if this is experience is one worth giving a go.

First up, users will need to download Crowd's Feed from the Play Store, and if they're running Android 5.0 Lollipop or above, they'll need to give the app some special access. 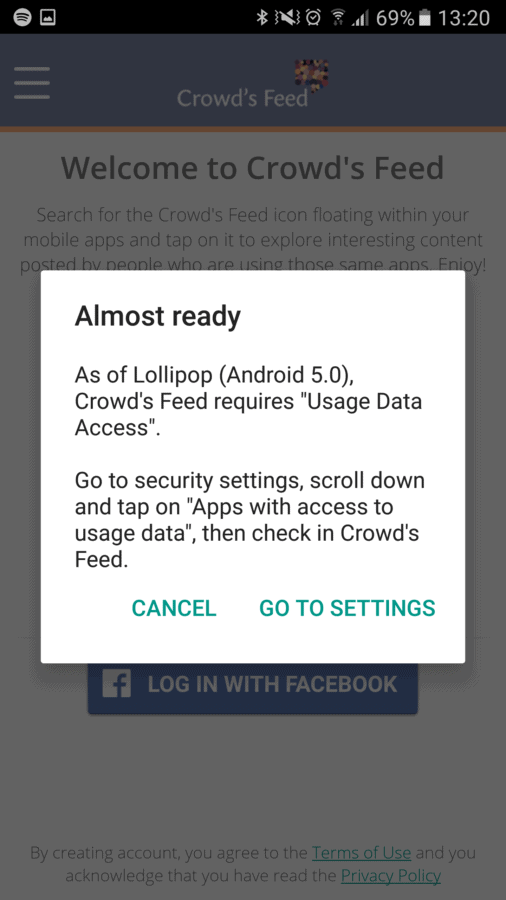 While Crowd's Feed does do an okay job of explaining this, the process described is not the same for everyone, especially not Samsung users like myself. 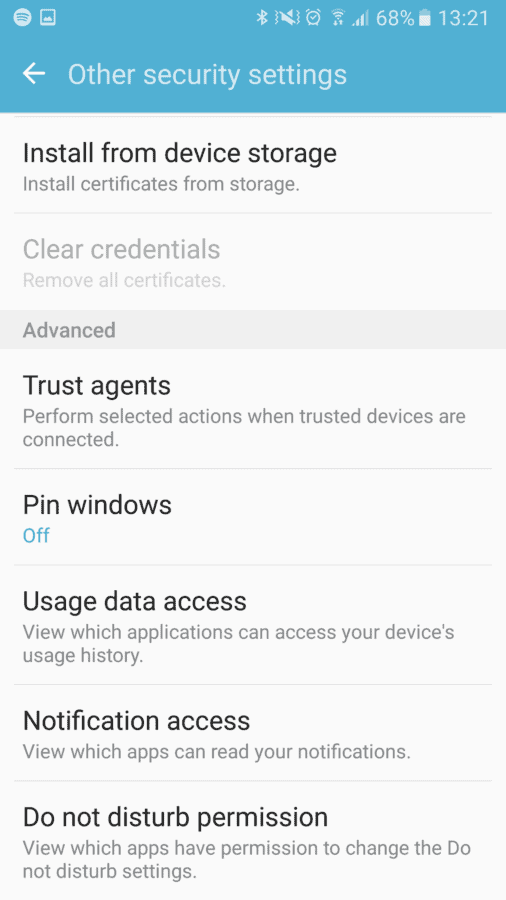 Still, this isn't too difficult a setting to find, but then users will need to sign up with their Facebook account if they wish to both view and make posts of their own, there is no other choice, say of signing up with an email address and a password for making posts. However, those that don't have a Facebook or don't want to use it, can still "browse" on Crowd's Feed, they just won't be able to make any posts of their own. 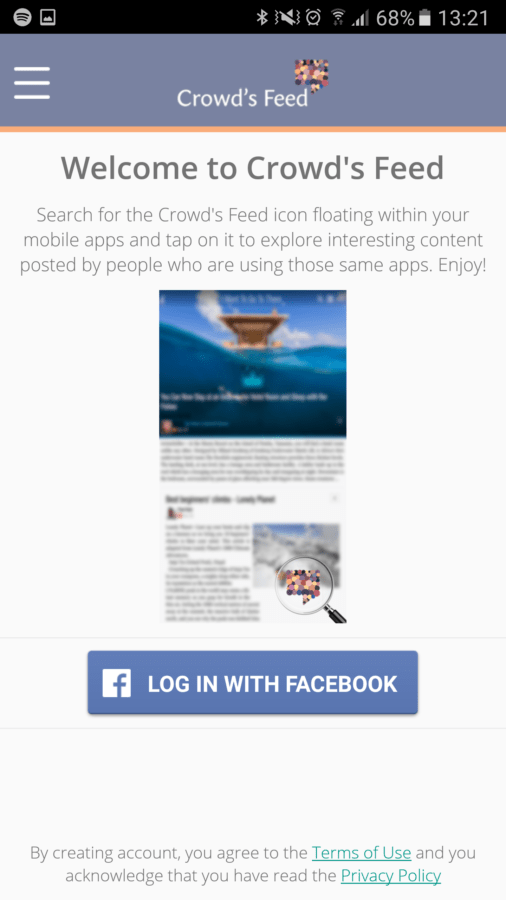 Still, once you've logged in with your Facebook account, that's it! After that, you're free to try to find apps that have some sort of Crowd's Feed community enabled for them. The icon that you're looking for, is this: 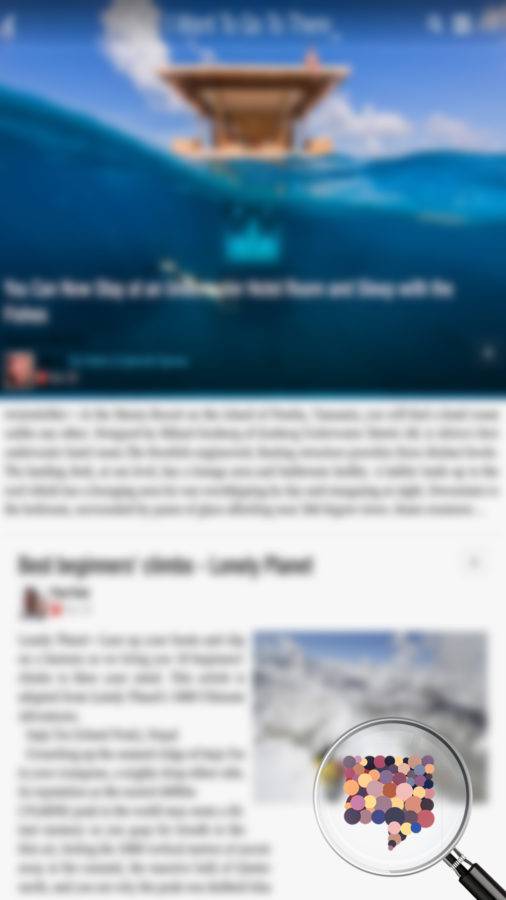 I tried this in a number of different apps, including the likes of Mi Home, WhatsApp and Netflix. But none of them seemed to have a community around them. 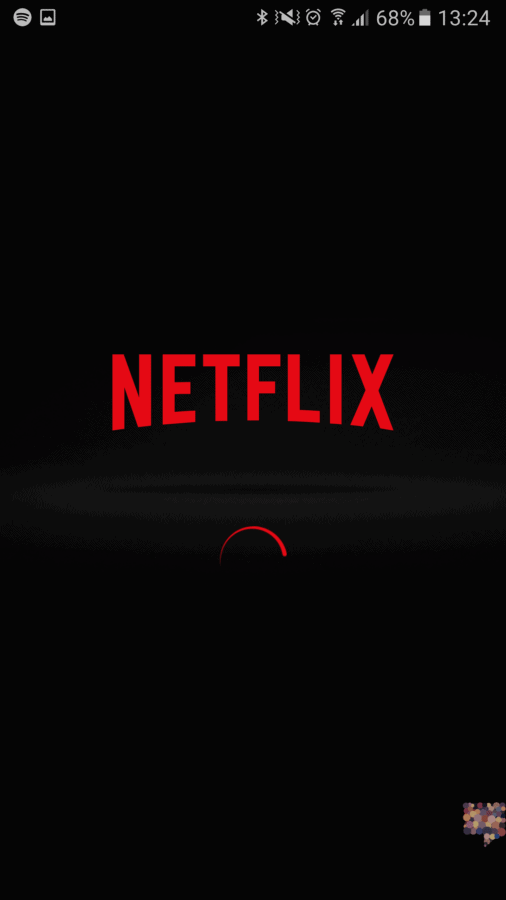 The icon is easily found whenever you're looking to get access to Crowd's Feed, and if you don't like its position, you can always change it. 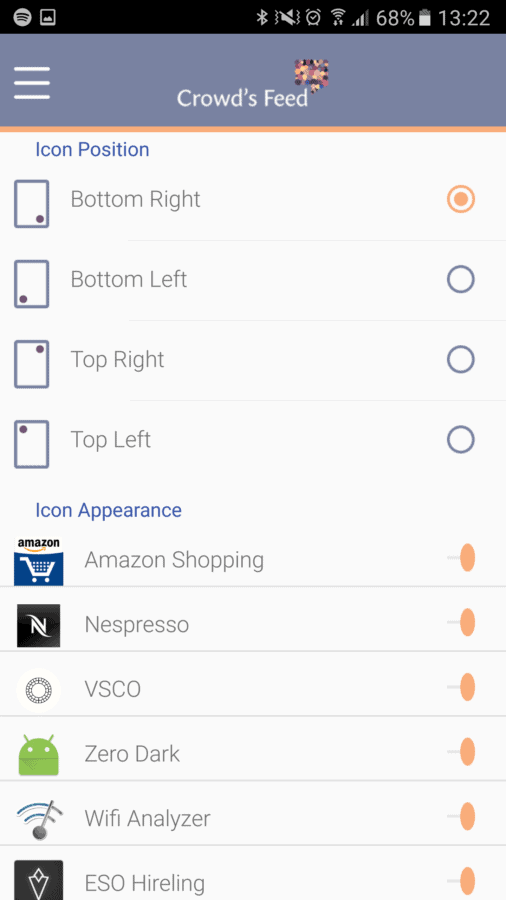 During my testing however, I found that more often than not the apps that I wanted to talk about, just didn't have any content being shared about them. Why that was I'm not sure, but I suppose that someone has to be first, right? 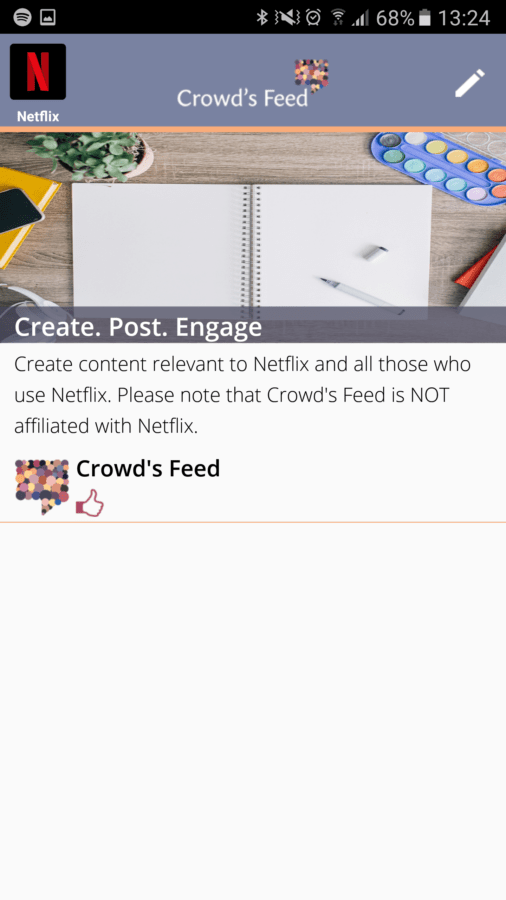 In many of the larger apps available on Android, there are lots of people sharing quality content and such, like this example of a community built around the ESPN app. 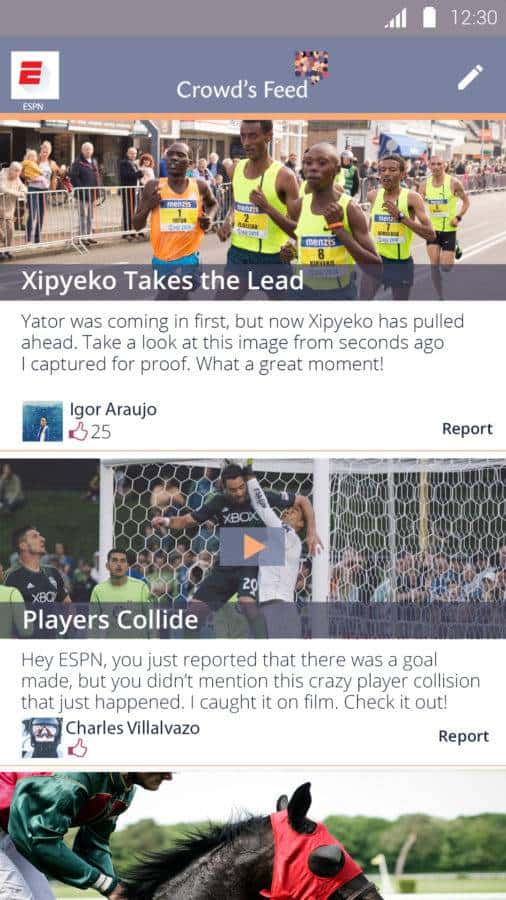 Over time, users can start to post their own content and doing so is pretty easy, while giving users the option to include photos and even videos, too. 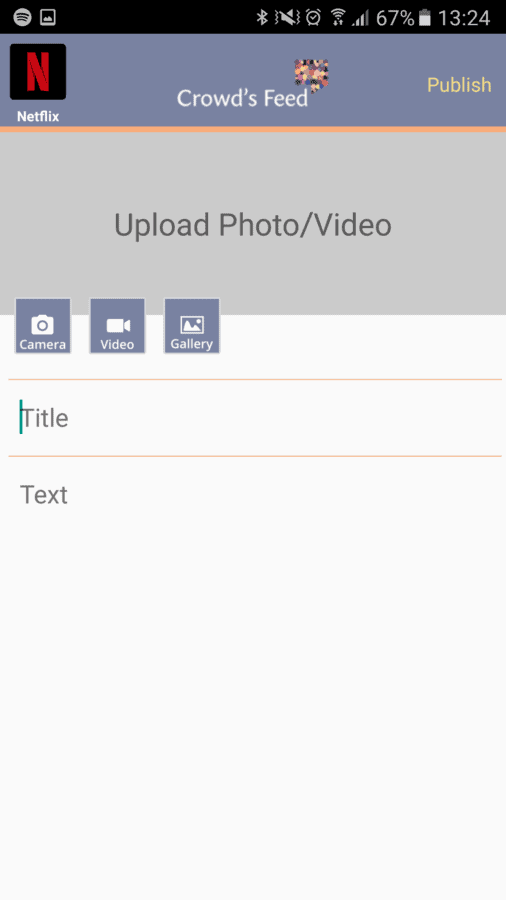 It appears as though Crowd's Feed does have some quality content available throughout a number of apps, it's just that none of the apps I wanted to connect with seemed to have this sort of community around them just yet. 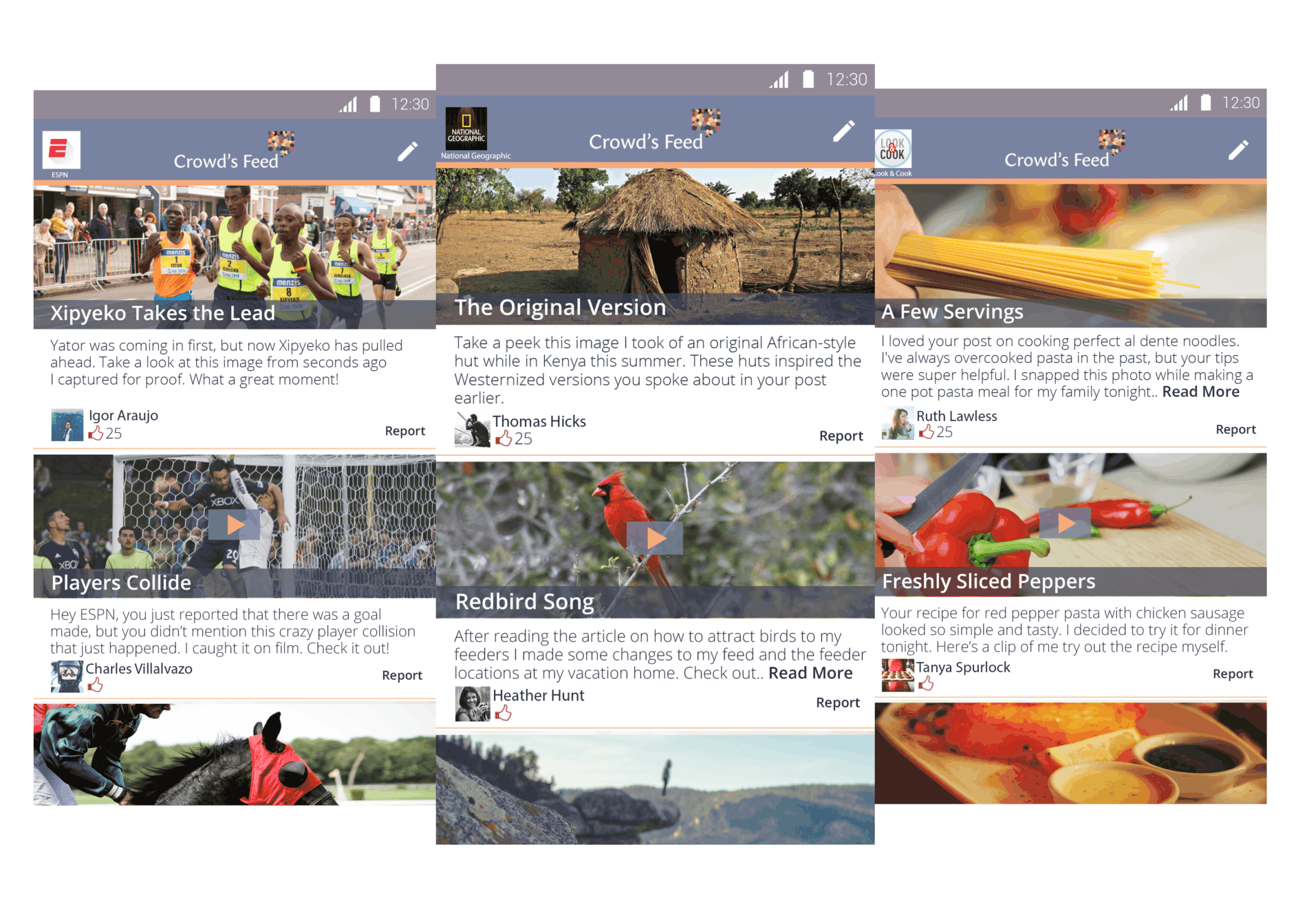 While the concept at the heart of Crowd's Feed is an admiral one, its execution doesn't quite seem to live up to this idea. Which is a shame and while it could be that the network itself is still trying to get off the ground, there's still a lot of work to be done. For one thing, the app mostly leaves users to their own devices once they're logged in and such, there is no interactive tutorial or pointers for users on what to expect and many of the posts that I came across didn't seem to add much value to the apps and such that I wanted to chat about. The user interface feels a little gray and bland, and while the floating icon is easy to find and identify, it didn't appear for all apps, all of the time. For an app that seems to be just getting off the ground, with only a thousand or more installs, Crowd's Feed has a lot going for it, but it needs more content and a better introduction to users that are completely new to the service. There's little the in the way of an introduction for how users can best use the app, and it doesn't look like useless posts from other users (like the ones I came across) are deleted much.

At the end of the day, Crowd's Feed is an app that has a lot going for it, but it needs to better capitalize on this great concept. I stumbled across a lot of fairly useless posts that were either just tests or people messing around. Instead, Crowd's Feed needs to better filter these posts as well as get communities for the bigger apps going, even if that means starting them on their own. A great concept that will surely grow into something bigger over time, Crowd's Feed is an interesting app worth a look.