Intel Security Battery Optimizer & Cleaner is an Android app that can improve how long your battery lasts as well as clean up your device, and give it a shot in the arm to improve performance, too. Much more than just an app to help you get the most out of your battery, Intel Security – the same people that bring us McAfee Security – have put together an Android app that can help you speed up your phone, including one-tap speed boosts and the ability to clean up storage. Intel Security Battery Optimizer & Cleaner gets rid of junk files, manages your data usage and keeps your device running smoothly. From the same company that bring us McAfee Security and power our laptops and computers, this has to be a quality app, right?

Just like other Android apps, Intel SecurityBattery Optimizer & Cleaner is just a quick and free download from the Play Store away from being on your device. When users first start to use the app, all they need to do is load it up and Intel Security has put together a decent introduction to what the app has to offer users. 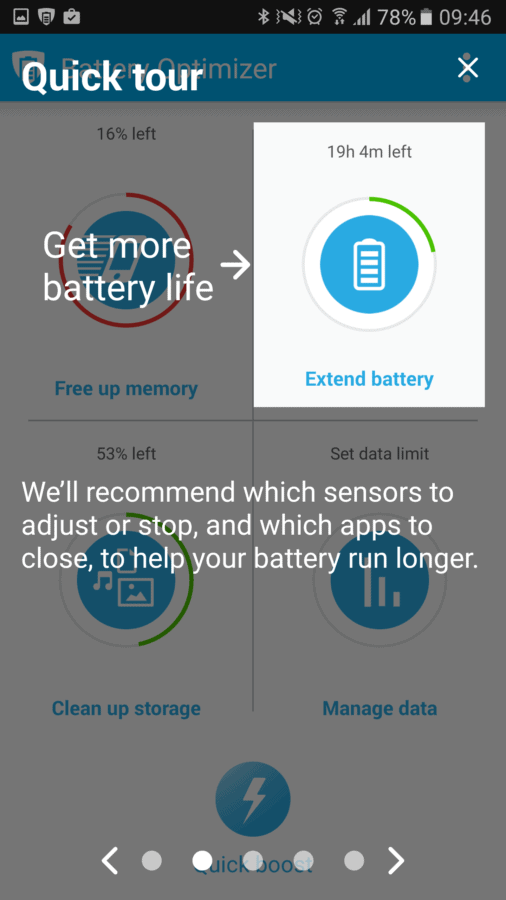 As introductions and tutorials go, Intel have put together something that gets the point across and makes it nice and easy to figure out just what Intel's Battery Optimizer & Cleaner is designed for. 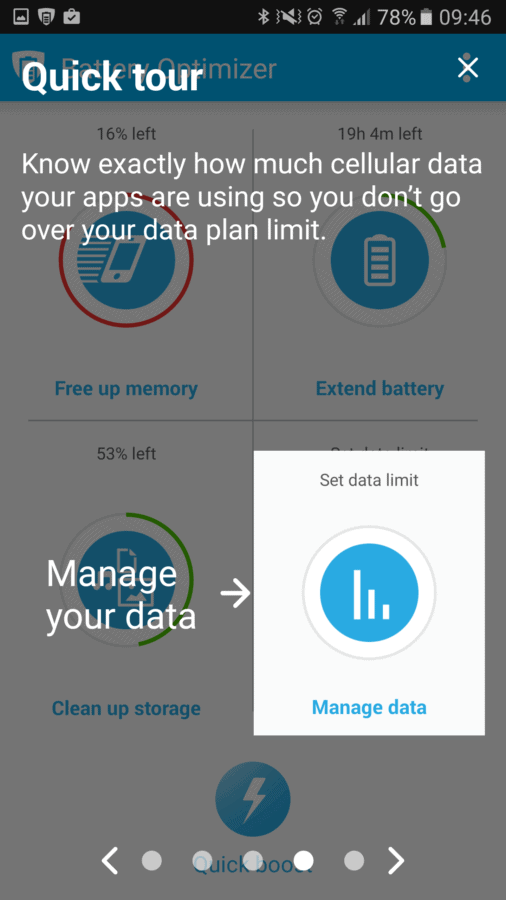 Once users have ben guided through the tutorial and such, users will be able to get familiar with the user interface. Intel Security has put together a simple and uncomplicated interface that isn't cluttered with ads or anything like that. 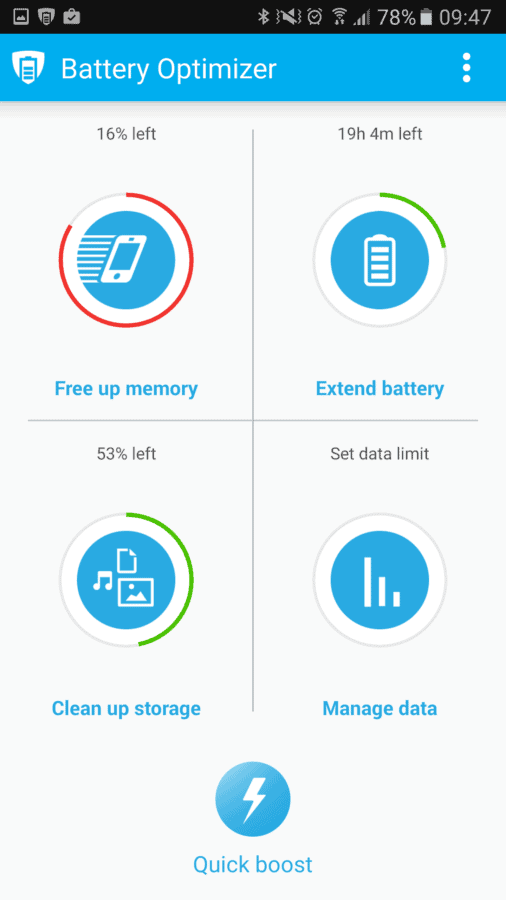 There's a lot on offer with Intel Security Battery Optimizer & Cleaner, and many users will want to take advantage of these different features, such as the core battery extending feature. 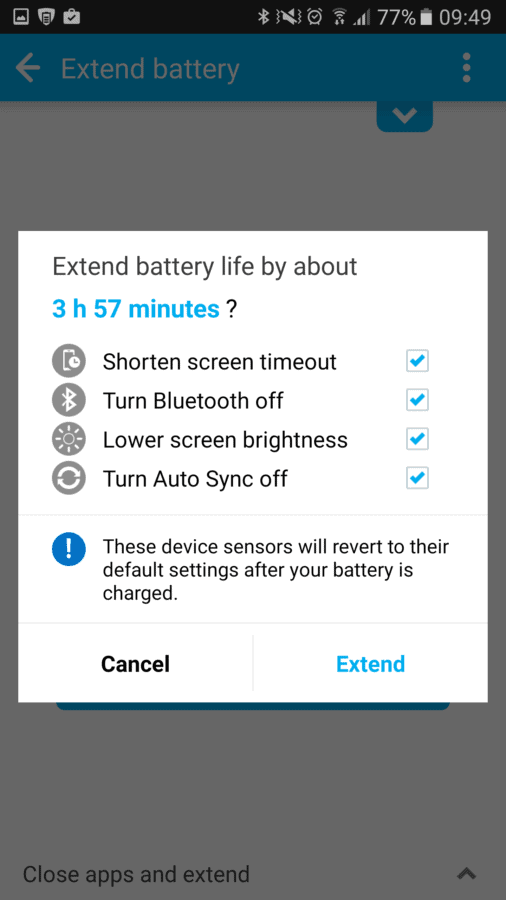 This feature of the Intel Battery Optimizer & Cleaner app gives users clear and simple options that, when toggled or untoggled, will have an impact on the amount of battery that life you can save. 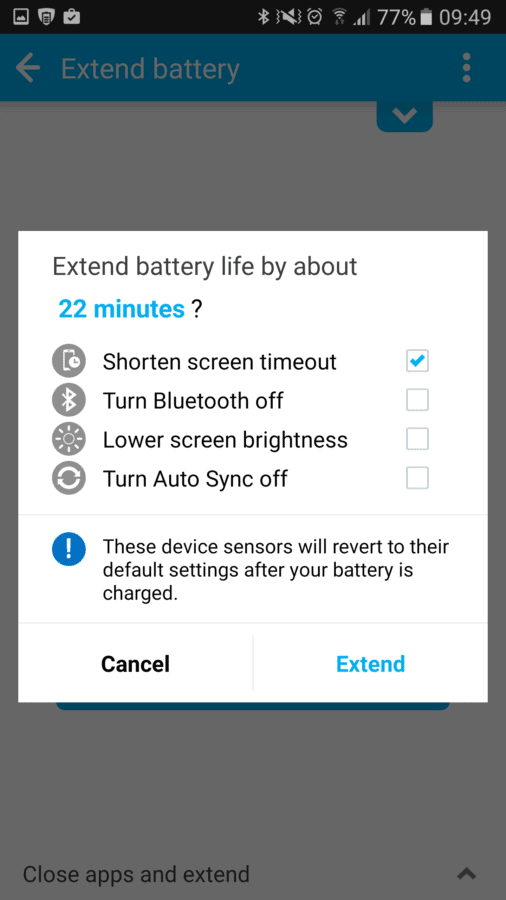 For the most part, Intel's Battery Optimizer & Cleaner doesn't make any revolutionary changes, and once your device has been charged, your phone will revert to its original state. I am a terrible user when it comes to taking care of my battery life, and I always have a bright, bright display and a long timeout as well. Changing these could apparently save me almost four hours of battery life, which is not be sniffed at. 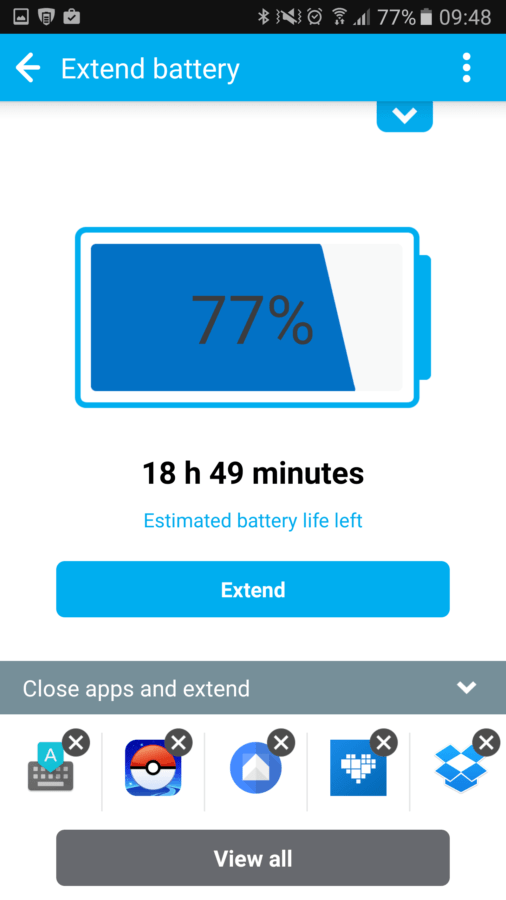 Users can also choose to stop running apps in order to extend their battery life, and while this isn't entirely scientific, running apps that are using data or keeping your processor moving will damage your battery life. Speaking of apps, Intel's Battery Optimizer & Cleaner can  help users see which apps are taking up the most space on their device, as well as uninstall these space-hungry apps, too. 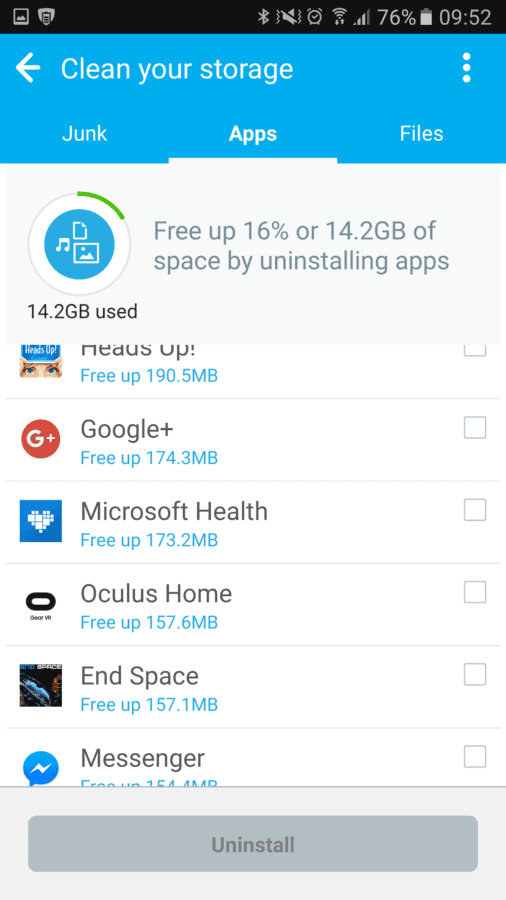 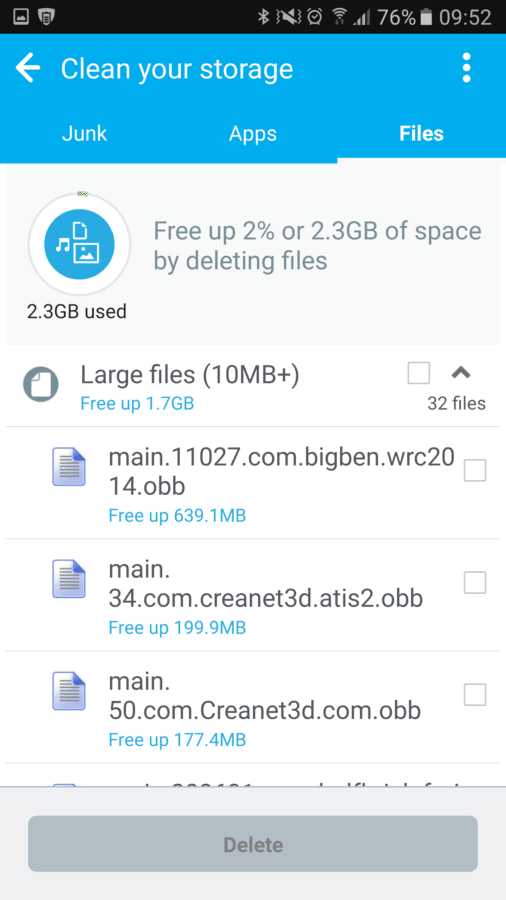 Apps, downloading files, playing games and so on all takes up data and if you're the sort of person that uses their phone for everything, Intel Security Battery Optimizer & Cleaner will help keep you on top of your data. Although, it is worth noting that this feature is also available inside of Android, too. 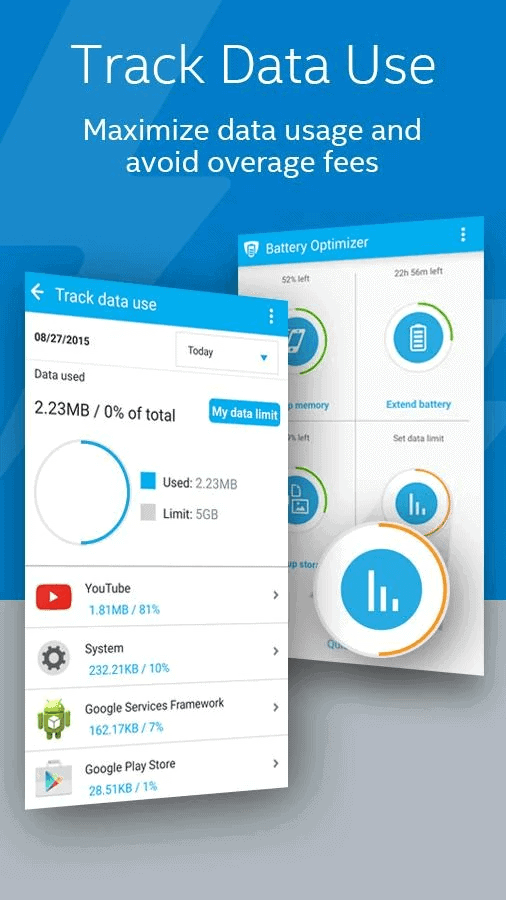 To make sure that users are always up-to-date as well, Intel Security Battery Optimizer & Cleaner has a built-in notification as well, this will alert you to hungry apps and such that are taking up resources and draining your battery quicker, like Pokemon GO, for instance. 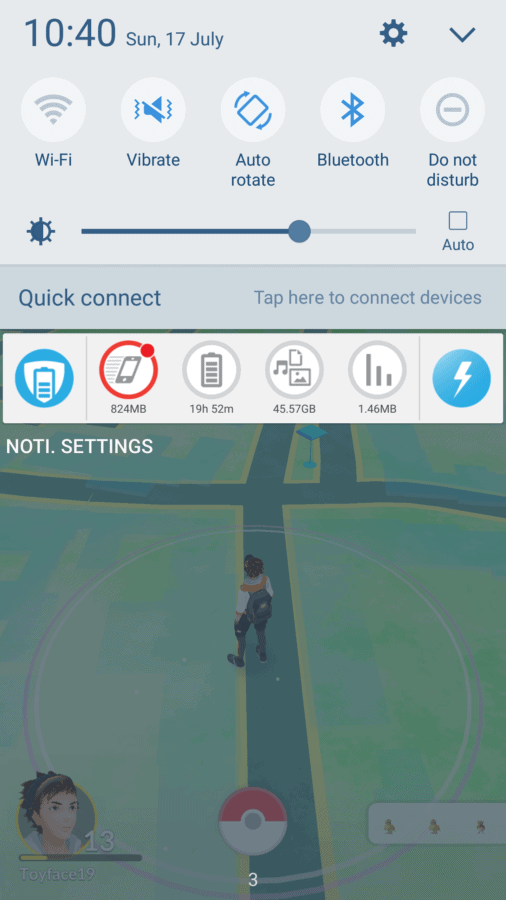 This can, if you want to, be turned off in the Settings. Which is where you'll find a number of different settings to further tailor the experience to your liking. 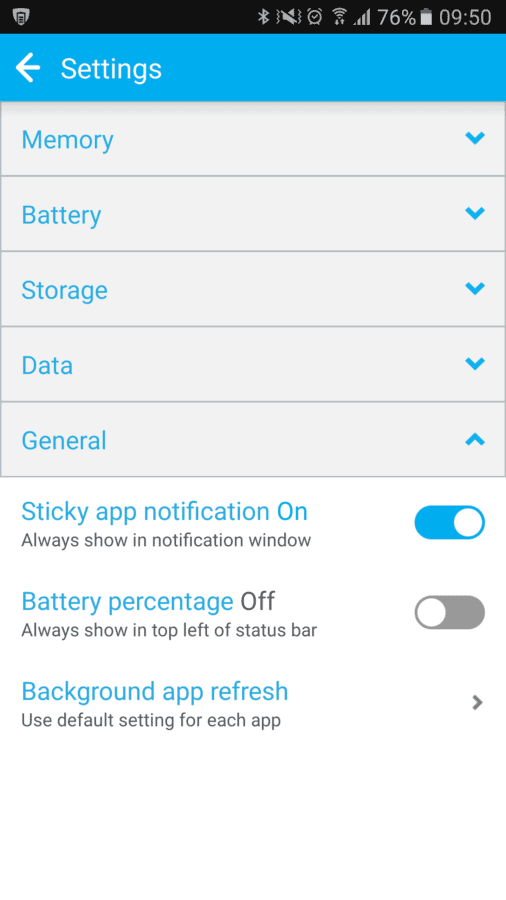 All-in-all, Intel Security has created a pretty decent offering in Battery Optimizer & Cleaner and while it might not be anything revolutionary, considering that there are many other apps in the Play Store that do this, it's from Intel Security. This ensures that there are no pesky ads, and that whatever changes made to your device are for the better, rather than for the worse. This is developed by the people that make processors designed for Android smartphones and there are few other names out there that can say they have this much experience working with the core operating system of Android devices. There are plenty of features here as well, such as the one-tap booster to speed things up as well as the file managing aspects that clean up your device and get rid of older files that you might not need any longer. It all comes together well in an easy-to-use package with a neat user interface that will appeal to all users no matter their age or experience with Android.

Overall, Intel Security Battery Optimizer & Cleaner has a lot to offer, and it does so without asking for payment or by throwing up pesky ads and such. It's nice and easy to use, explains everything in a calm and upfront manner, and genuinely makes a difference to your battery. It helped my device to stay running smoothly and no matter how much I used my device, I got a lot morel battery life out of it thanks to helpful tweaks from Intel Security.