Smartwatches are one of the most popular devices in the wearable segment – the segment which is expected to ship around 200 million wearable devices by 2019. Initially, smartwatches were considered a niche product, but over time it has gained some popularity among consumers. Unlike other wearables – such as fitness trackers, it has much more functionality than just tracking your fitness activities.

Though smartwatches have always accounted a positive growth over the time, according to the latest report from International Data Corporation (IDC), smartwatch shipments has declined 32% in Q2 of 2016. This is the first time we are seeing a decline in smartwatches. As per the report, in the second quarter of 2016 smartwatch vendors shipped 3.5 million units, compared to 5.1 million units shipped in 2015, which shows a year-over-year decline of 32%. Based on the global market share, the top 5 smartwatch manufacturers consist of Apple, Samsung, Lenovo, LG Electronics and Garmin. It’s also interesting to note that among the top 5 smartwatch vendors, only Apple has accounted decline, while other vendors show positive results. For Apple, this decline is largely due to consumers are backing off from the purchase for upcoming Apple watch and improvements coming in WatchOS, said senior research analyst, Jitesh Urbani at IDC. Despite the decline Apple remained the leader in Smartwatch segment, accounting all-most the half of the market share. Apple’s market share remained 47% for this quarter, compared to previous 72% share, which shows a 25% decrease in its market share.

Smartwatch market is likely to back-on-track soon with the launch of new and improved smartwatches, such as upcoming Samsung Gear S3 which is expected to launch at IFA this year and 2nd Generation Apple watch which is rumored to be launch in later this year. 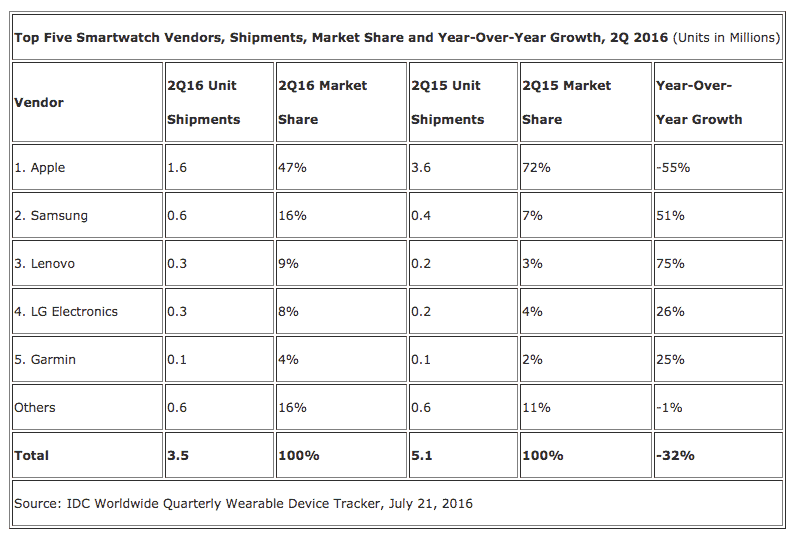