When it comes to power banks, most of them are pretty similar. They all have about the same capacity, they all have a few USB ports, but where some of them differ is the speed at which they can charge. The Tronsmart Presto here uses Qualcomm Quick Charge 3.0, but on top of that, they also allow you to charge via USB Type-C. Something you don’t see too often with power banks these days. The majority of them are still powered by micro USB cables. The Tronsmart Presto is the company’s latest power bank and it’s aimed at the future, as is evident by including both USB-C and Quick Charge 3.0. We’ve been using the power bank for a good week or two now, and have put it to good use thanks to Pokemon GO. So how well does it stand up to the competition? Let’s find out.

This is a 12,000mAh battery pack here which can charge most smartphones about 4 times before running out of juice. That does also depend on the size of your battery. For instance, the iPhone would be able to be recharged about 6-7 times or more. While something like the Oukitel K6000 Pro with a 6,000mAh battery would only be able to get about two recharges, if that. We used the Tronsmart Presto with the LG G5 (Quick Charge 3.0 compatible and uses a USB Type-C port) as well as the Nexus 6P (Quick Charge 2.0 compatible and uses a USB Type-C port) for the past few weeks. Using both the USB Type-C and USB Type-A ports included on the Presto, and it has charged both devices about 3-4 times – the Nexus 6P was closer to three times, due to it having a larger 3450mAh battery inside. 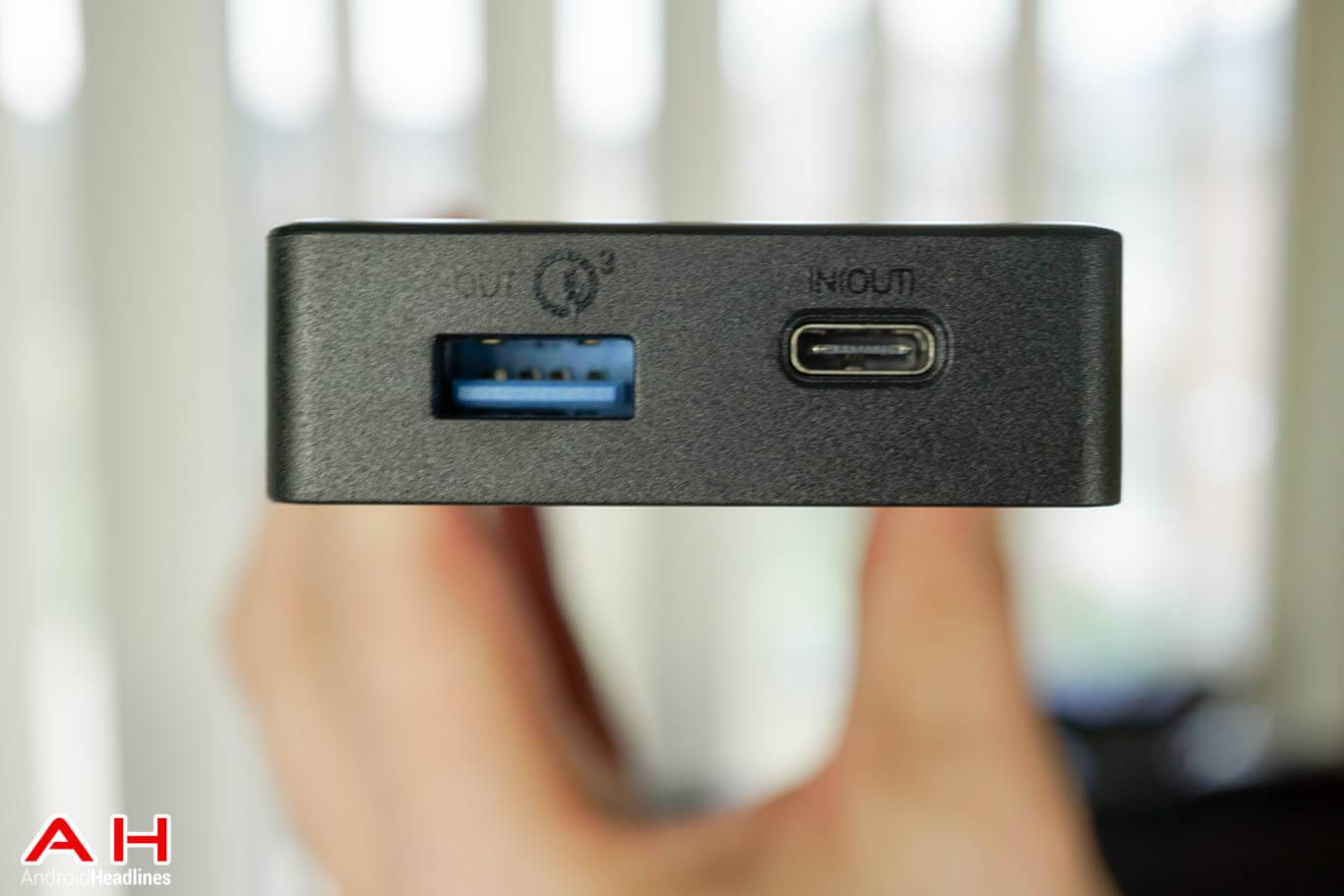 With the Tronsmart Presto supporting Quick Charge 3.0, it’s also important to note that the charger will support Quick Charge 2.0 and Quick Charge 1.0, in addition to traditional charging. Due to the way Quick Charge 3.0 is built, it is backwards compatible to earlier versions, as well as traditional charging. This is a good thing, as users are able to charge other things using this battery pack – like a smartwatch, fitness tracker or even a laptop – without having to worry about the device being overcharged and causing issues. As we mentioned already, we used the LG G5 and Nexus 6P with the Presto. It charged both without an issue. But with the Nexus 6P not sporting Quick Charge 3.0, it was a bit slower than the LG G5. The LG G5 saw similar speeds to a wall charger that is Quick Charge 3.0 compatible, while the Nexus 6P was about the same as a Quick Charge 2.0 wall charger or the one that is included with the Nexus 6P. This was the case for both USB ports on the Presto. So there’s no issue with charging speeds from the Tronsmart Presto. Always a good thing to see.

Let’s talk about that USB Type-C port for a minute. As most of you know, “USB” stands for Universal Serial Bus. Meaning that it’s a Universal port that can be used for just about everything. And while that is mostly true, USB Type-C is a bit more universal. Not just because it is reversible, unlike USB Type-A, but also because it can do input and output through the same port. For example, on the Anker PowerCore 10,000 we reviewed recently, it uses a micro USB port to charge up. So you would need to unplug your micro USB cable from the USB Type-A port and plug that into the wall charger and plug the micro USB end into the battery to charge it. With the Tronsmart Presto, that’s not needed. You can use that USB Type-C port for charging the Presto as well as charging your smartphone. Which means that this is technically a dual-port battery pack, even though it features just one USB Type-A port. It’s a feature that most people probably won’t care about, which is understandable, but those with USB Type-C devices, they are going to love this feature. 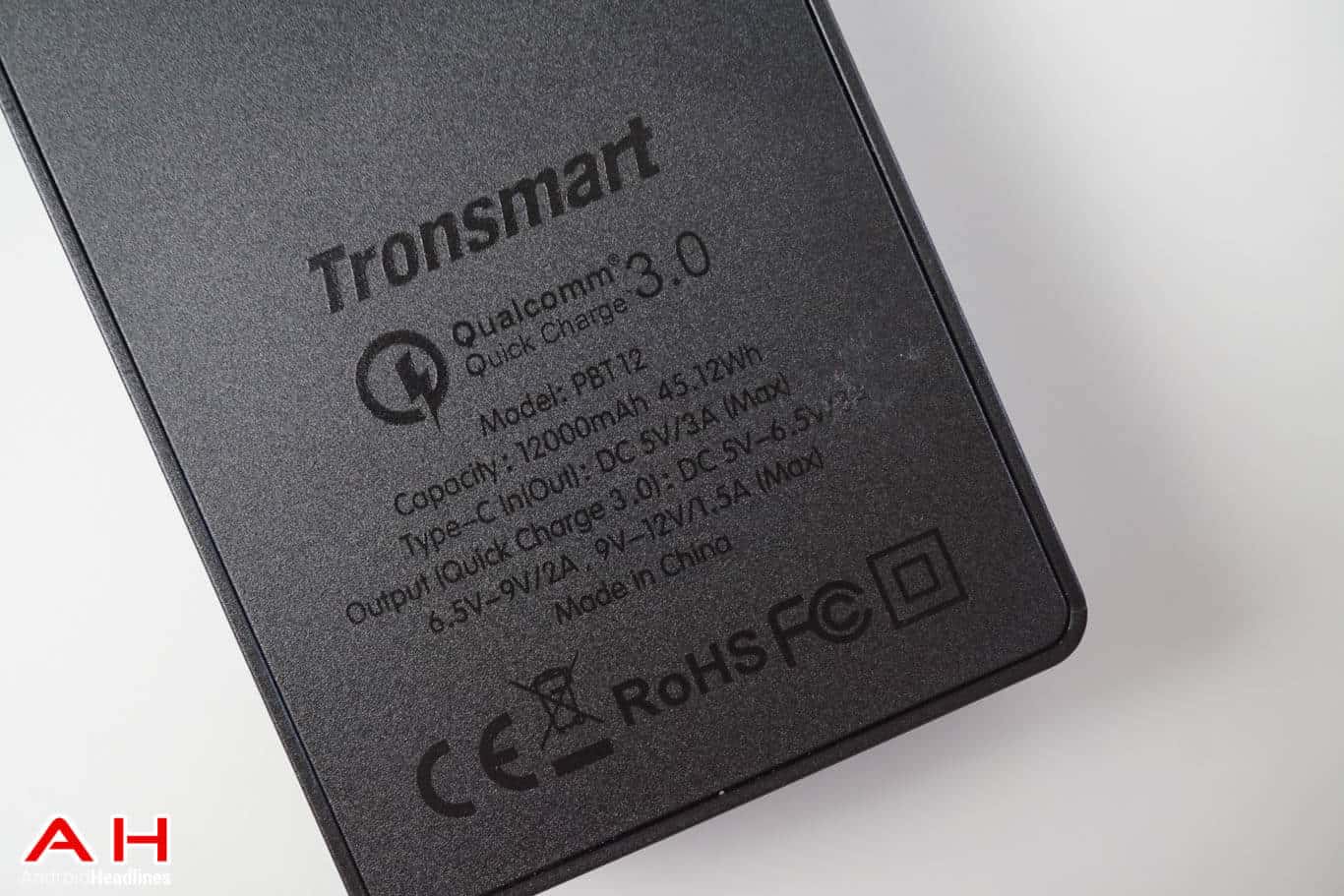 The design of the Presto is pretty straight forward. It’s not made to look like a great battery pack. It’s made to be functional, and keep your smartphone and other gadgets charged up when needed. And it does that quite well. It’s a rather long battery pack, so it’s not going to fit in your pocket – unless you are wearing cargo shorts/pants – but it’s also fairly heavy. This is to be expected since this is a 12,000mAh battery. I’ve carried it around in my bag that I take when traveling, and it’s worked quite well. I’d like it to be a bit shorter, but there’s not much to complain about here.

Now if you thought that because this has a USB Type-C port on it, that you would get a USB Type-C cable in the box, then you would be correct. Tronsmart includes a fairly small USB Type-C to Type-A cable (it’s just under a foot long), but it does its job. Of course, if you have a USB Type-C device like the HTC 10, LG G5, OnePlus 2, OnePlus 3, Nexus 5X or Nexus 6P, then you probably already have one or two of these laying around. Tronsmart also offers up a 18-month warranty with the Tronsmart Presto. So if you do have any issues with the battery pack, you’ll be able to get it straightened out without much of an issue. That’s always a good thing, these days. Especially when talking about batteries that are charging your smartphone.

So the real question here is, should you buy the Tronsmart Presto? Well this is a bit more expensive than most battery packs. We’re looking at a $34.99 price tag here. Which is effectively double the price of a normal 12,000mAh battery pack. But that is due to it packing extra power for Quick Charge 3.0 and new technology in USB Type-C. Realistically, it’s not a bad price. However, I would say that you should only buy the Tronsmart Presto if you have a USB Type-C and/or a Quick Charge 3.0 device or plan to buy one. For example if you have the HTC 10 or LG G5, both of which use USB Type-C and Quick Charge 3.0 over USB Type-C, then it’s definitely worth picking up. Tronsmart is selling the Presto exclusively through Amazon, which is definitely a good thing for those that have Amazon Prime. Meaning that you can get free two-day shipping on the Tronsmart Presto, by hitting the link below.