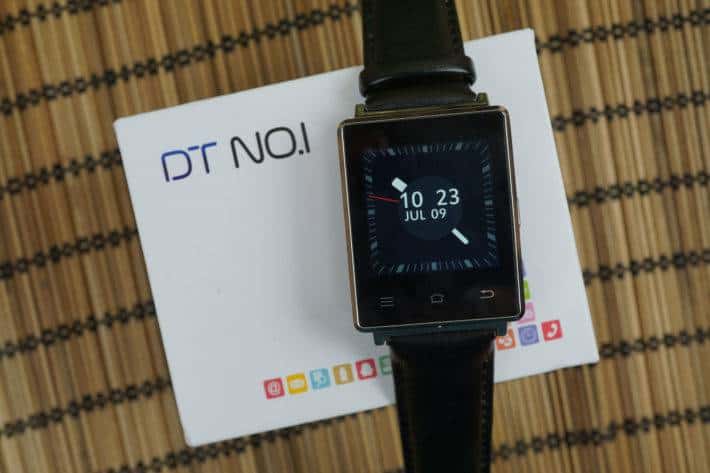 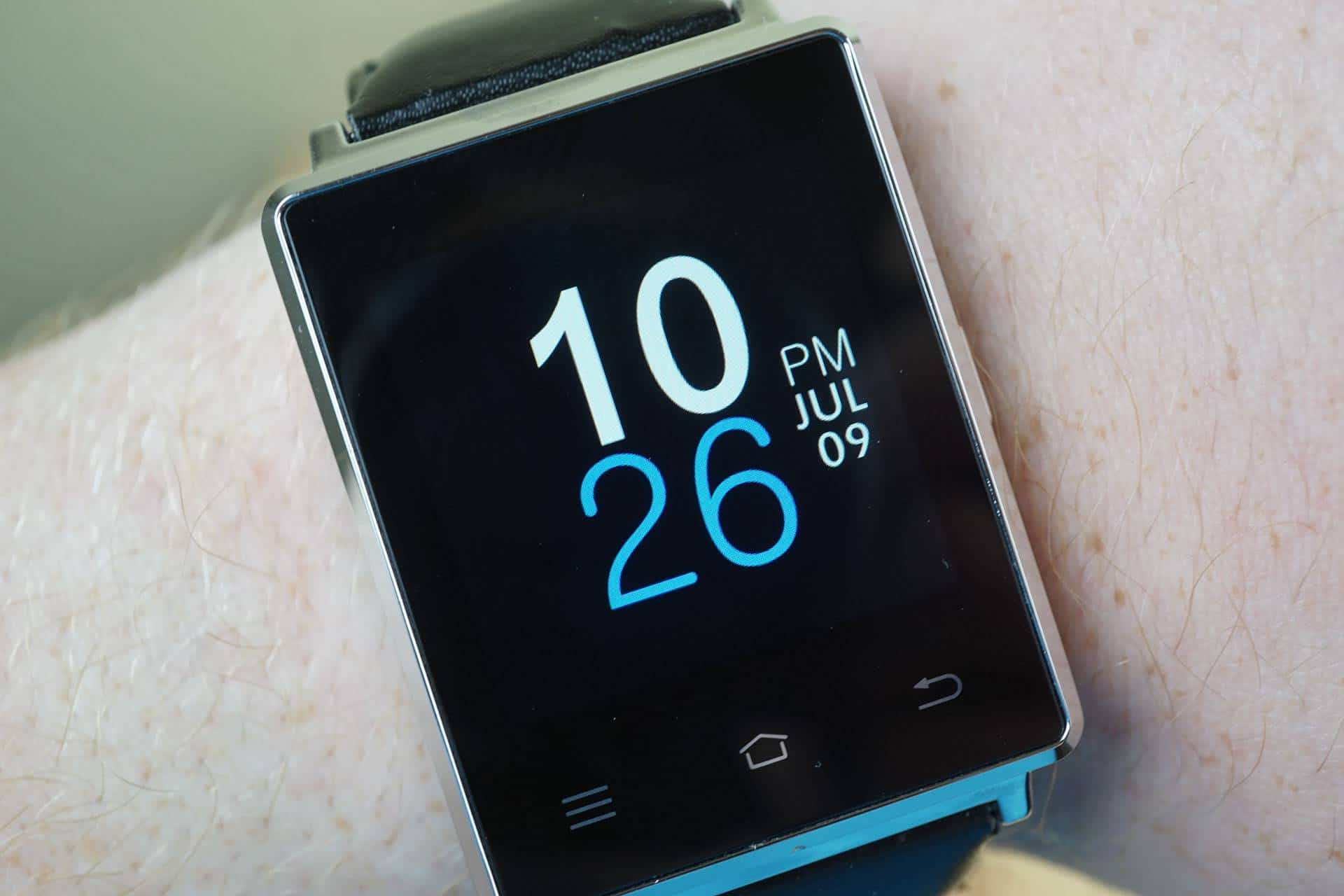 The No. 1 D6 actually has some pretty spectacular specs here. Including a MediaTek MT6580 quad-core processor inside, which is clocked at 1.3GHz, and is paired with 1GB of RAM. We're also looking at 8GB of storage, with a 1.63-inch IPS display (which has a 320×320 resolution). The display also has Sapphire glass on top, which will protect it from bumps and such. It does also support WiFi, GPS, Bluetooth 4.0 and has a heart rate sensor. All of this is powered by Android 5.1 Lollipop.

As far as colors go, the No. 1 D6 smartwatch comes with a black, silver or gold casing. All with the same leather band. 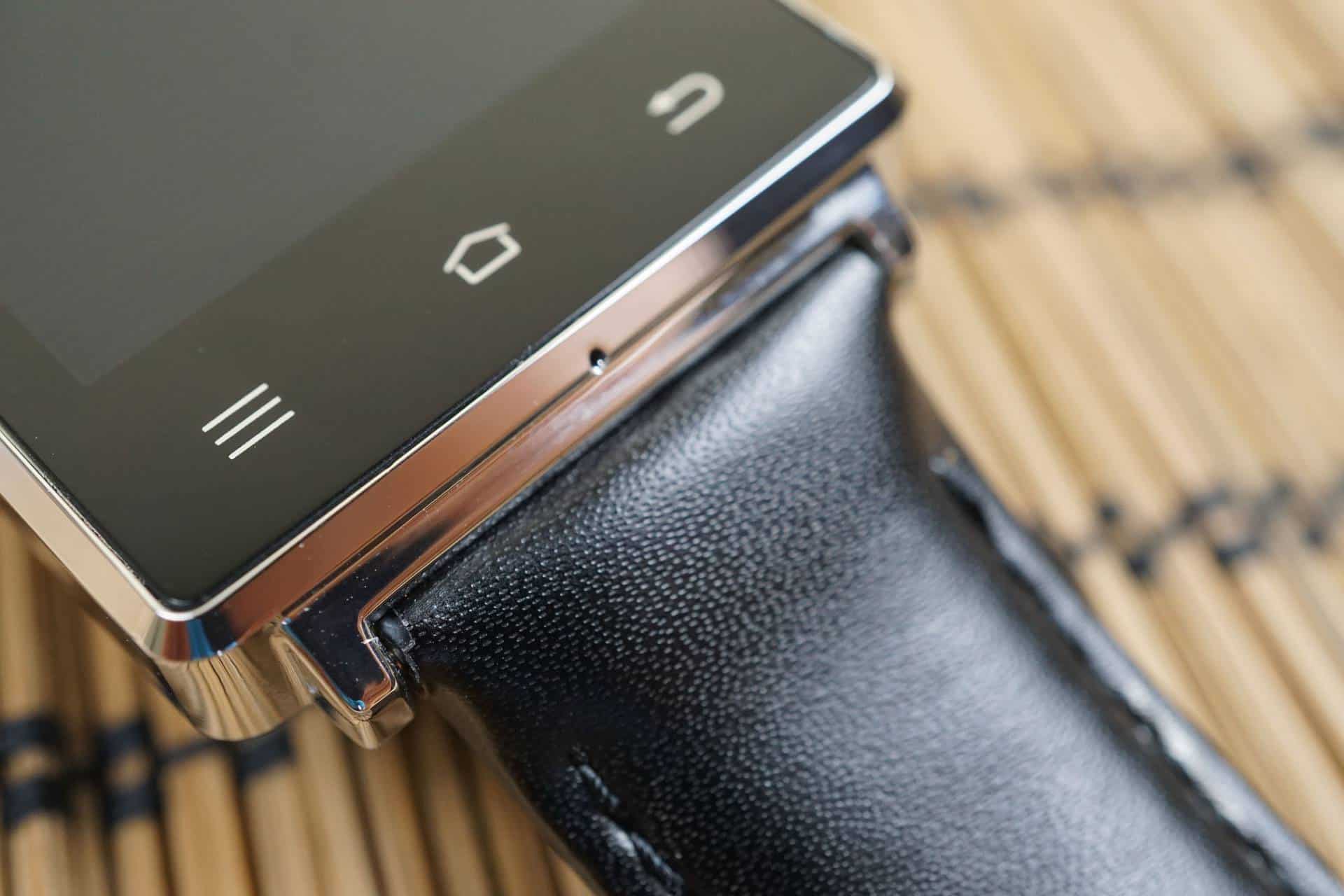 Looking at the face of this watch, many may think it's ugly. And this is due to the fact that it has three capacitive buttons, much like a smartphone would. There's a menu button on the left side, with a home button in the middle and a back button on the right. Additionally, there is a sleep/wake button on the right side of the casing for the No. 1 D6 smartwatch. Now while having capacitive buttons on a smartwatch is definitely not the best idea, in terms of design, that doesn't mean that the build quality is terrible. It is actually very solid. The casing is made of metal, as one might expect, and the display looks great with the Sapphire glass on top. Underneath the smartwatch, there is a set of four pins that connects to the charger to charge up the smartwatch, along with your heart rate sensor. Now, I'm not a fan of having these pins here for connectivity, as they aren't real stable and often times the charger will disconnect on its own. But it does look better than having a micro USB or USB Type-C port underneath the smartwatch.

Now the sides of the smartwatch house the hinge for the strap. No.1 did a good job here in allowing the hinge to be accessible. Allowing users to swap out the bands if they wish to do so. Now the D6 does come with a "genuine leather" strap included, and it does look fairly nice, to be honest. But it may not be a strap that everyone likes, or wants to use. Making the ability to swap it out a pretty big deal. 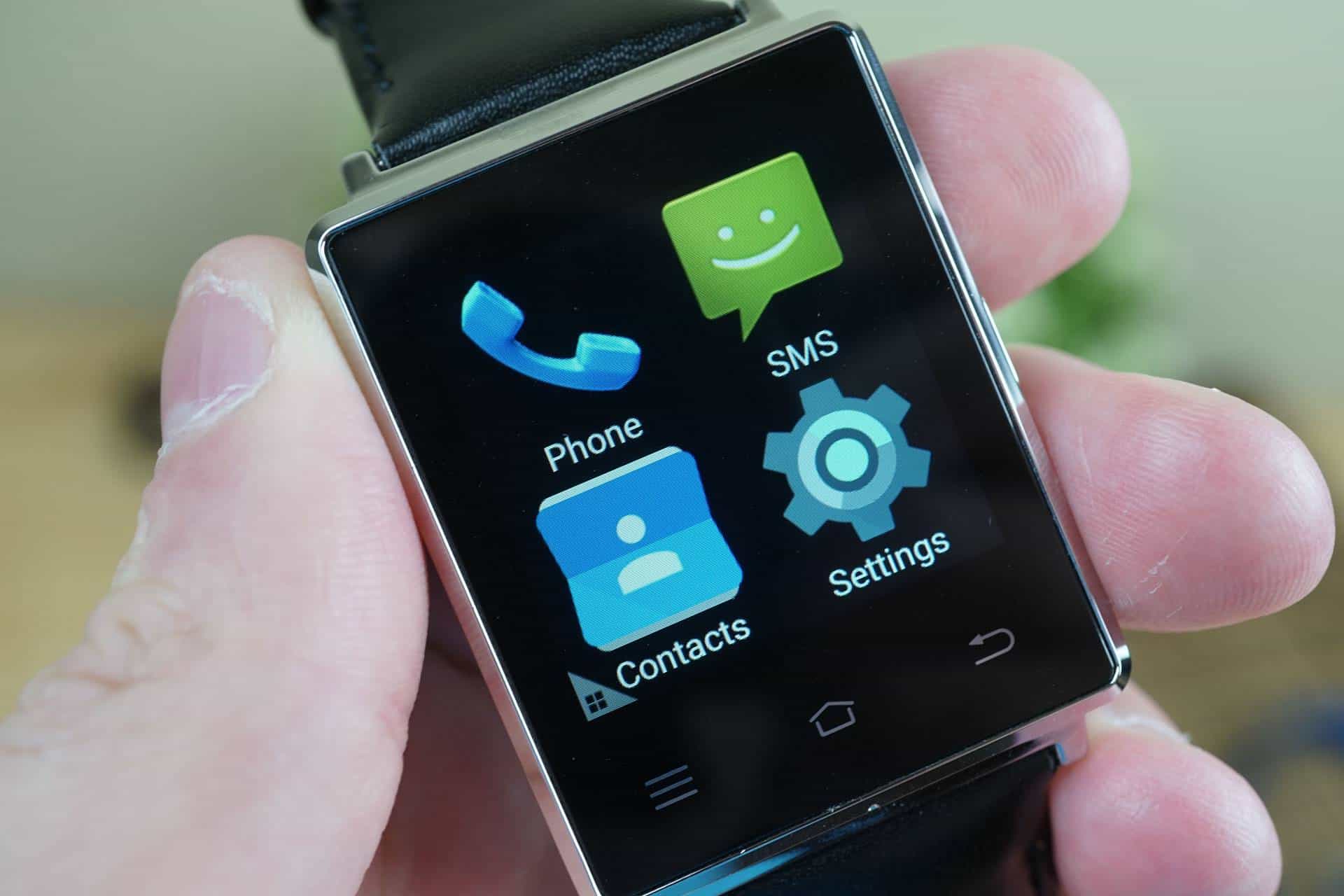 When it comes to the companion app for the No. 1 D6, you'll need to download it from their website – which is listed on the quick start guide. Unfortunately the app is not available in Google Play. It is simply named "Watch Helper" and doesn't actually provide much, in terms of functionality. There are a few settings included here, but thats about it. In fact, it doesn't even help you connect the watch to your smartphone for the first time. To do so, you need to go into settings and then tap on Connect and Bluetooth on the watch, then go into Bluetooth settings on your phone to find and connect to the watch. A bit cumbersome to be honest.

The app does allow you to have the watch read your incoming text messages, as well as show your missed calls and incoming calls. It also has the ability to send notifications from apps to your wrist, which can only be so helpful. Seeing as you do still need to open your smartwatch to look at the notification and deal with it. Luckily, the watch can be used without a smartphone, as it does have support for 2G and 3G networks. Which is a good option for using the smartwatch to track your activity, check the time, and so forth. And that will also save a bit more battery on the No. 1 D6, which already gets some rather decent battery life, to be honest. 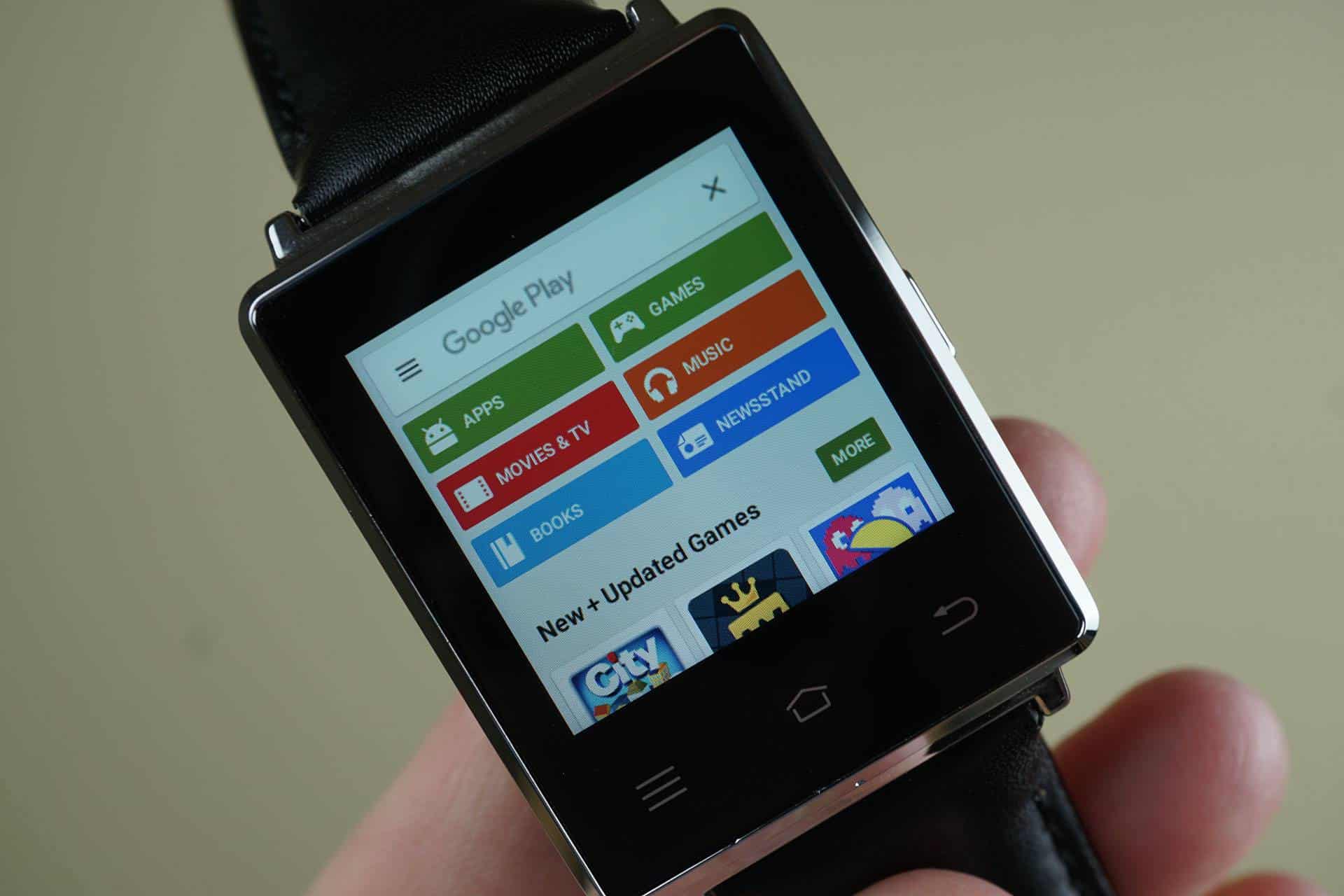 On the functionality front, the No. 1 D6 is a bit clunky. That's to be expected when you take Android and then put it on a screen that is just 1.63-inches. While using the smartwatch, we often found it hard to navigate through the OS. If you swipe up from the bottom of the screen, you are greeted with an app drawer. This app drawer shows you the phone, SMS, Contacts and Settings. If you scroll down in the app drawer, you'll find many other apps, including the Google Play Store. Yes, the full Google Play Store is available here. Pretty cool, but also pretty cumbersome to navigate through. To use the Google Play Store, you either need to insert a SIM card into the watch, or connect to WiFi. All of which is done on the watch and not through the app on your smartphone. Which means there is a full-sized keyboard on the watch – in fact, it's the Google Keyboard. And as you might expect, trying to type your WiFi password on a 1.63-inch screen is not a fun experience.

There's loads of functionality available here on the No. 1 D6, but the question here is, do we really need all of this on our wrist? I don't think we do. It's Android 5.1, so it's not even the latest version of Android. And the watch was only announced a few months ago, so there's really no reason why it didn't come with Android 6.0 Marshmallow. I will say that it is pretty cool to browse through the Google Play Store on your wrist, but it's not something that I'd want to do often.

The battery life on the No. 1 D6 is actually pretty great. We were able to get almost two full days (we're talking 48 hours here) without needing to recharge the smartwatch. Now keep in mind, we did not insert a SIM card into the smartwatch, and it was on WiFi only when at home, the rest of the time it didn't have connectivity. So if you do have a SIM card inside the smartwatch, you're likely looking at about a day of use. Which is pretty similar to Android Wear battery life. We don't claim that Android Wear has amazing battery life, so we won't make that claim with the No. 1 D6 either. While one full day is likely enough for most people, it could definitely be better, and should be better. 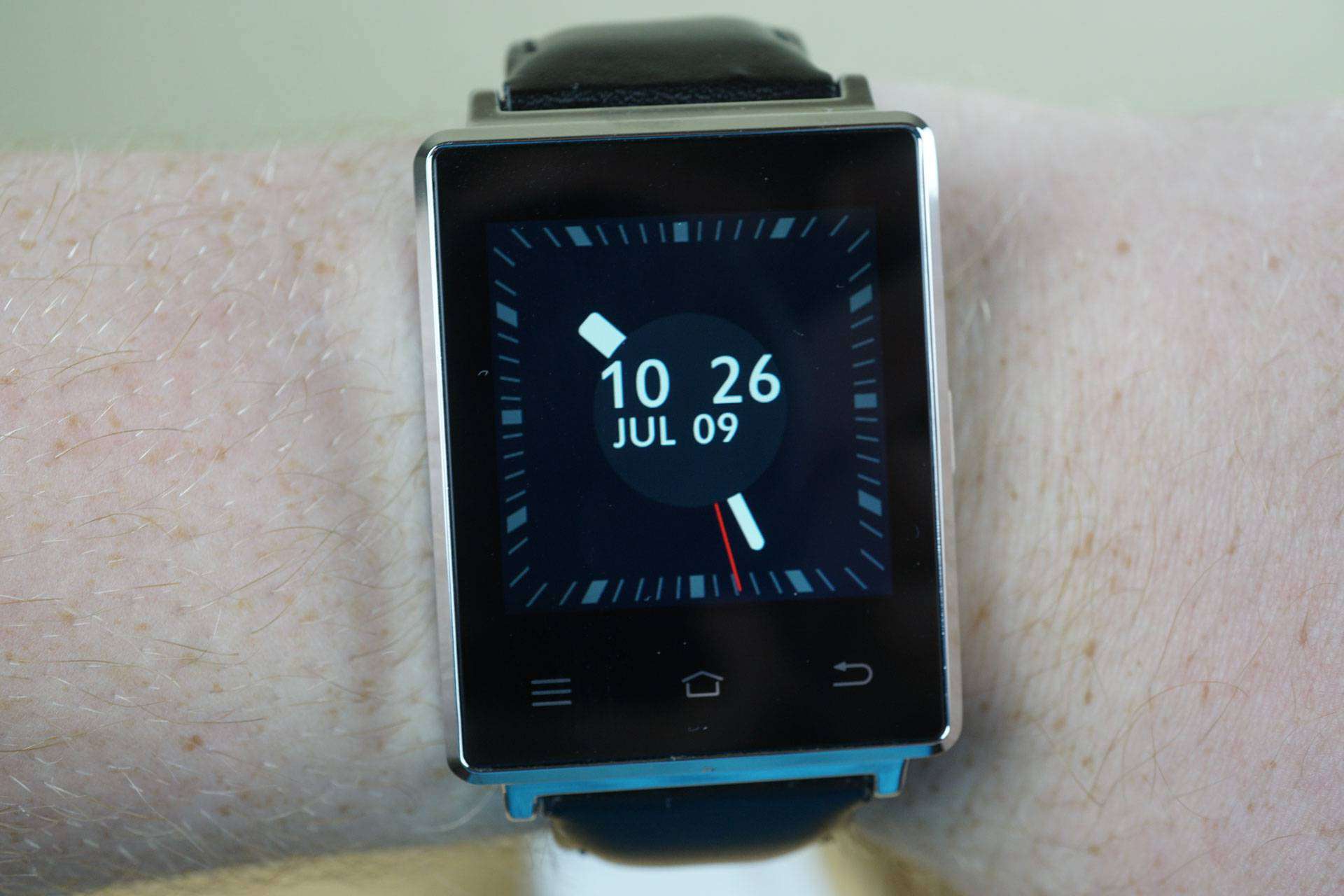 The No. 1 D6 is a pretty interesting smartwatch. I'll admit that when I first saw the images of the No. 1 D6 pop up online, I was not a fan. I thought it was pretty ugly with the capacitive keys. Now that I've been using it for a good little bit, I have changed my opinion of it. I'm still not a fan of the capacitive keys, but since this is a full version of Android, they are kinda needed. Sure you could make the argument for using software buttons, but that also takes away from the screen real-estate, which is already fairly minimal.

This smartwatch is something that likely won't sell all that well, and I believe that is due to how clunky the software is here. Heck, sometimes the home button doesn't even work. But if you are interested in a smartwatch that runs a full version of Android, and is under $100, then this is definitely one to take a look at. It's one of the very few smartwatches that runs on Android that is also a standalone smartwatch. Meaning that it doesn't need Bluetooth connectivity to your smartphone, since it has both WiFi and mobile data connectivity. You can pick up the No. 1 D6 smartwatch from Gearbest today for just $85.89

Buy the No. 1 D6 Smartwatch
Advertisement
Trusted By Millions
Independent, Expert Android News You Can Trust, Since 2010
Publishing More Android Than Anyone Else
18
Today
57
This Week
338
This Month
4321
This Year
105798
All Time
Advertisement