Many of you might already know Anker for their range of well, everything, at least in terms of mobile accessories and cables that is. Anker has, like many other similar firms, made a name for themselves offering inexpensive, yet high-end Bluetooth speakers. Their latest is this, the SoundCore Sport XL which is designed to offer users both a blend of affordability as well as longevity. Designed to take a hit as well as be rugged and waterproof, the SoundCore Sport XL seems to tick a lot of the right boxes, and at a reasonable price tag, too. With 16W output across two drivers, as well as a passive radiator, a rugged shell and an IP67 rating, capable of submersion of 1M, it all sounds great on paper. 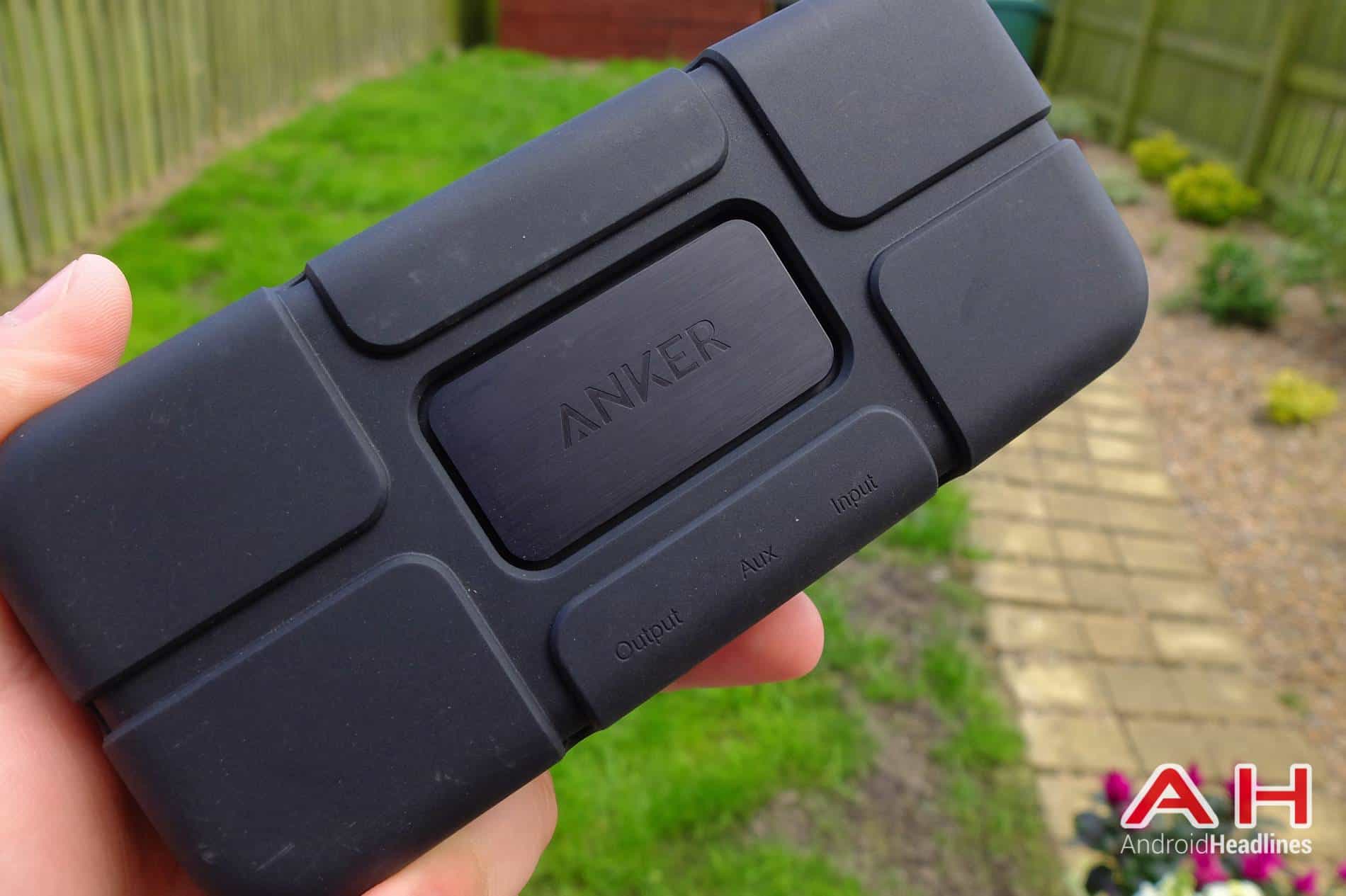 Just like any other Bluetooth speaker, the Anker SoundCore Sport XL has a laundry list of specs and figures to pour over. With 16W of output power across 2 drivers, joined with a passive radiator for added bass at the rear, this seems like a powerful little speaker. Of course, at 17.6 x 4.4 x 8.1 cm and 821g, the SoundCore Sport XL does come close to leaving up to its “XL” moniker. It’s not too big in person, but it does feel a little weighty in hand, and will be noticeable inside of an already-packed backpack. The built-in Lithium Ion battery is rated for 15-hours of playtime on a single charge, and there’s also a 5V 1 Amp charging port here as well, it’s a full-size USB port that will charge any device you can think of. Connection is handled by Bluetooth 4.1 and Anker promise an impressive 66-foot wireless range, but there’s a standard 3.5mm input at the rear if you’d rather use that. Charging the unit is done via standard microUSB and there are both charge LED indicators and a constant blue LED to let you know the unit is on or not. 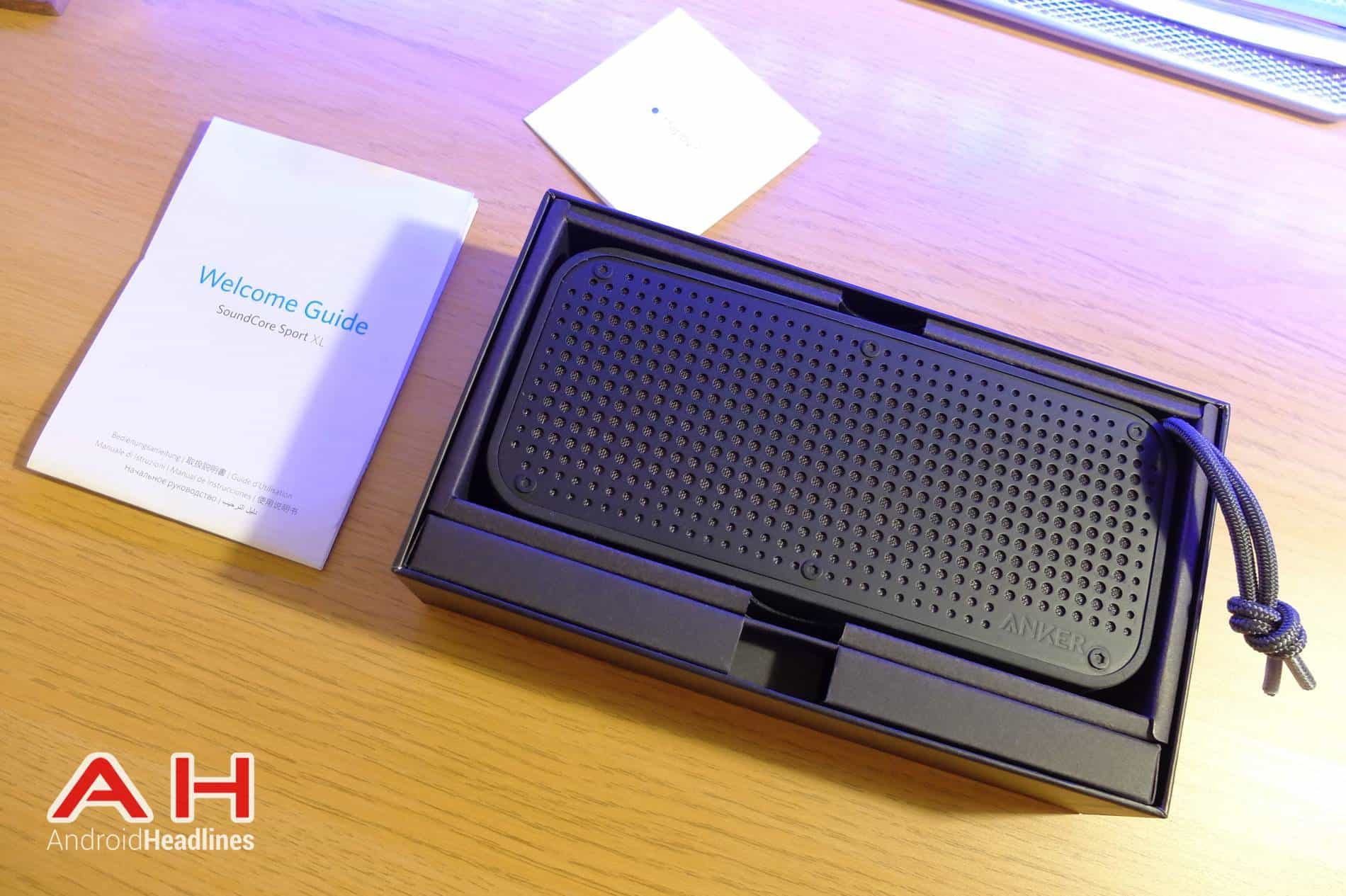 Bluetooth speakers are becoming fairly common these days, and it can often be the case that manufacturers try to stand out by throwing in lots of extras to sweeten the deal. Here however, there’s very little of that. The microUSB cable is a standard, boring, throwaway affair and there’s no protective pouch to slip the speaker in when traveling, and the only real extra included is the provided hand strap. This is a nice little rope sort of thing, but we would have liked to have seen a little more included here. A carabiner for attaching to a bag or something similar would be an excellent inclusion, for instance. 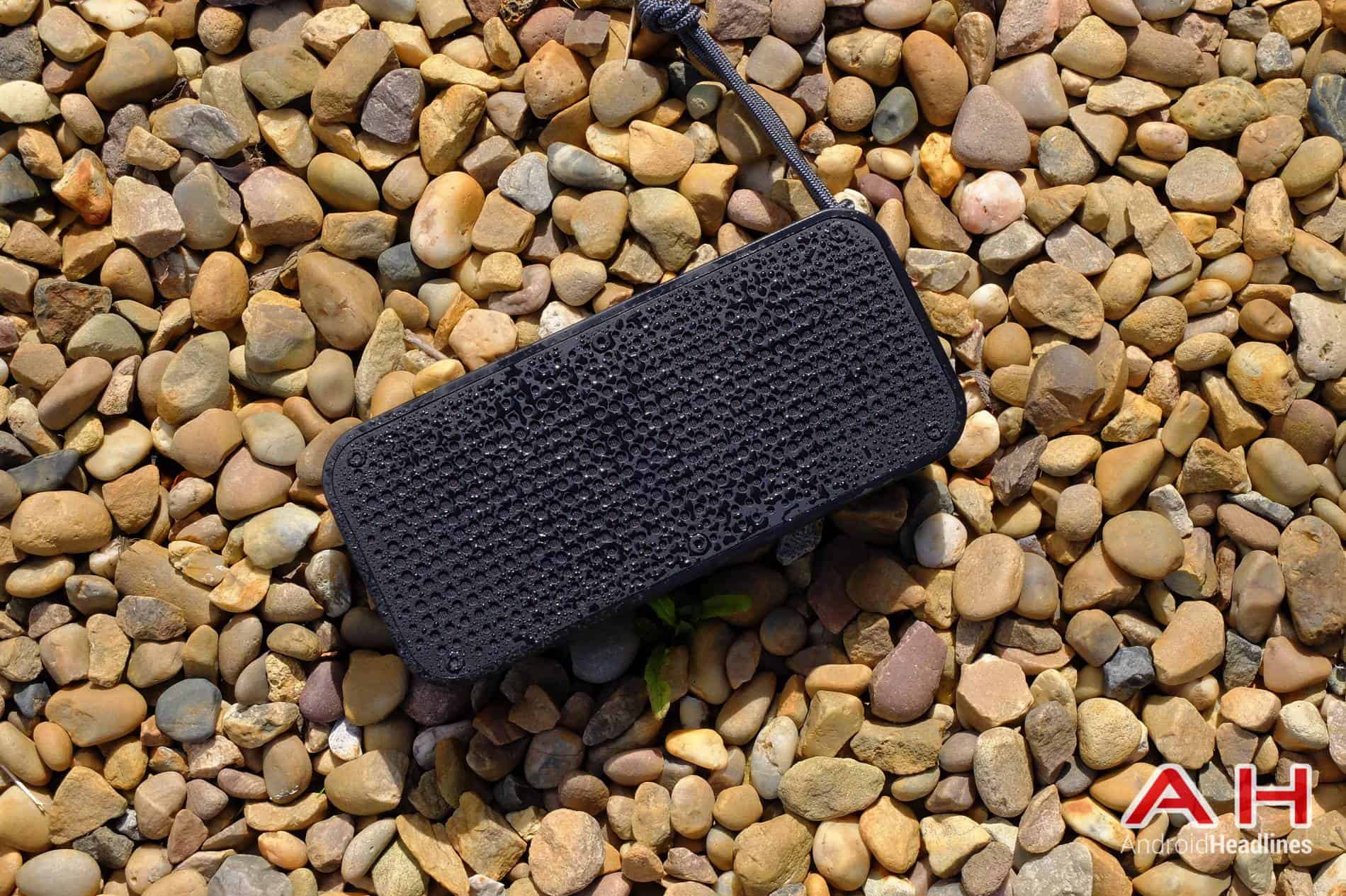 The first thing that hits you when looking at the Anker SoundCore XL is that it means business. When they said that it was designed to be rugged it’s clear that Anker meant this both in terms of functionality as well as looks. At 821g, this is not a super-light speaker, and it feels a little chunky in-hand, but it is easy to carry in one hand without any issues. The black color and edgy, yet rounded corners offer a lot of padding and should quite happily take a few knocks without showing any marks. The front of the speaker is fairly bland, there are lots of tiny perforations for sound, but behind that there’s a layer of water-resistant material which is far from attractive, but gets the job done nicely. The faux screw heads on the front didn’t impress me much, but this is probably a matter of personal taste. The buttons on top of the speaker allow users to connect, play/pause, turn the volume up or down and turn it on or off. These are raised slightly, but they’re worked into the overall surface, not their own buttons. This makes it a little difficult to find the right button you’re looking for, because there’s nothing separating them and so on. Still, they’re nice and clicky and work just fine. Rounding things out is the battery indicator and status LED. The latter is a blue LED that lets people know they’re connected, while the former is a series of three LEDs that lets people know how much battery – relatively speaking – they have left.

The SoundCore Sport XL is what it is; a big, bulky speaker that is designed as such to make sure it can withstand some serious punishment. It’s not too big in person, but it’s not your standard portable affair, either. This is perhaps just as well of course, because smaller speakers don’t make for the loudest of parties. This sort of look and feel won’t please everyone, but there will be just as many lovers of this as there will be haters. It is however, without a doubt, nice and solid as well as sturdy enough to stand tall without falling over or moving around on a flat surface. It feels well built, and after I gave it more than my usual amount of abuse and it stood up to all of it without much of a problem (more on that later). 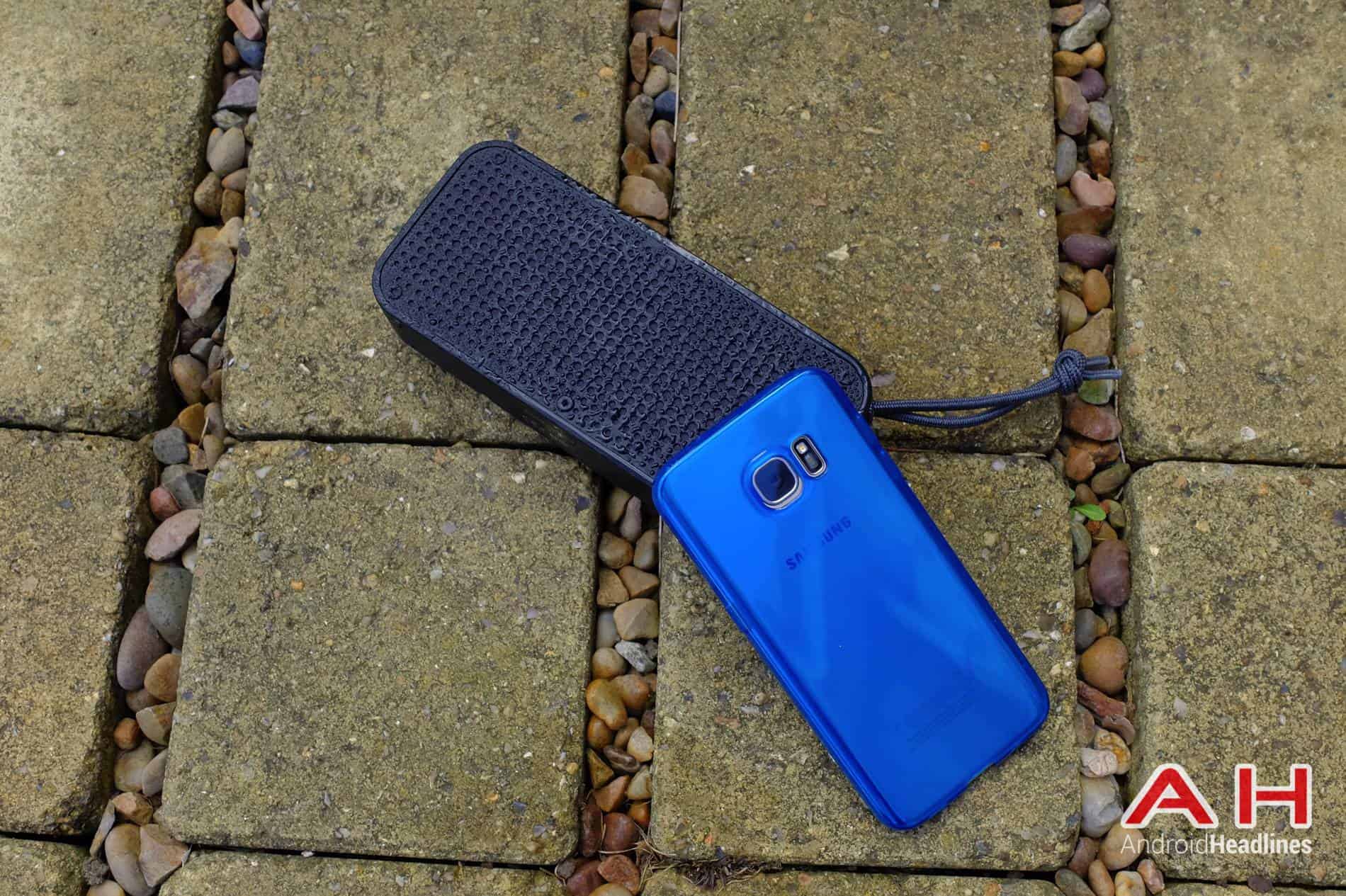 Bluetooth speakers are an interesting breed of device, they often carry the afterthought of “for a Bluetooth speaker” when describing their overall sound quality, and unfortunately the Anker SoundCore Sport XL isn’t much of an exception here. There are two 8W drivers in the SoundCore Sport XL, and together they make for a portable 16W system with a passive radiator to boot. In a nutshell, this produces some pretty decent sound quality, but it’s not the sort of thing that’s going to win it any awards.

The overall sound signature here is fairly warm, and perhaps a little muddy when all’s said and done. This will appeal to modern listeners that typically look for more bass in their sound systems. Muddy is however, about as good as this speaker gets. The treble is represented with the SoundCore XL, but it could be a little softer and more detailed, as oppose to the sharp and almost shrill high notes that this ends up producing. I could be being a little too harsh here, but then again something tells me that overall sound quality isn’t quite what Anker were going for here. Slower songs with not a huge amount going on work well, but once a handful of instruments all start to join in, this is one speaker that starts to struggle.

When listening to the SoundCore Sport XL, there’s a sort of grittiness and almost Radio-like fuzziness to the overall sound reproduction here, which isn’t exactly what we’re looking for in a speaker. Then again, this could have something to do with the handful of showers, balcony throws and whatever else I put it through. I doubt many other speakers in this price range would have been able to keep going after all of that.

Final word on sound quality is that for this price tag and its waterproof special powers, the SoundCore Sport XL sounds okay. It produces a surprising amount of detail, has some strong bass for the size of the unit and will definitely help light up a night in the woods with good enough sound that people won’t complain. It could be a lot better, but it could also be a hell of a lot worse. 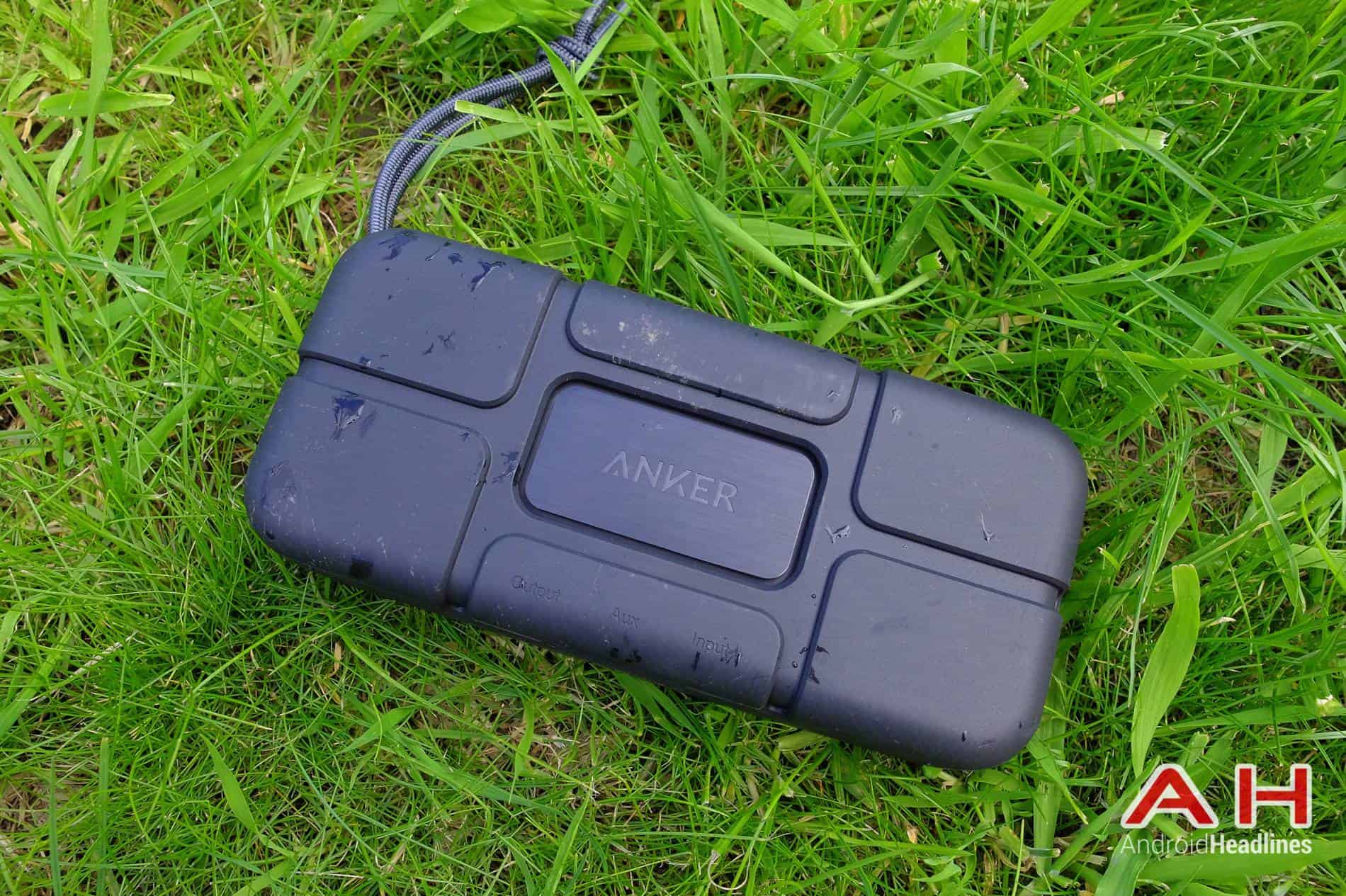 The main attraction of the SoundCore Sport XL is of course the fact that it can handle a beating, including laughing in the face of the danger that water poses, too. To test the IP67 rating as well as its rugged build, I took a number of showers with the Anker, and I made sure to get it nice and soaked. It dried fairly well, but has honestly never sounded the same since. Clearly, flooding the speaker is not what it was made for, but it does still work, and work well. It keeps a charge just fine and gets nice and loud without distorting. This is a lot more than I could say for other “waterproof” speakers. To test out the rugged build, I threw it out of my second-floor window onto the lawn below a number of times and I generally showed it little respect. Now – after I took some nice photos of the device – it has a few scuffs here and there, but it still works. I was genuinely impressed with how tough this speaker is, especially given its price tag and compact build. For a speaker that doesn’t look all that tough from afar, the SoundCore Sport XL really holds its own. I would be comfortable recommending this to anyone that was looking to take this with them on trips into the woods, to the pool or just for those that are a little clumsier than most.

It might not please everyone in the looks department, and it might be the best-sounding speaker at this price range, but as an overall package the SoundCore Sport XL from Anker has a lot to offer. For one thing, it really does hold up against the abuse that it says it will, and I have never felt so confident about bashing around a speaker than I have with this one, and this is all for a speaker that’s fairly compact, too. It could do with a more “fuller” and rounded out sound signature, but it otherwise sounds good and gets nice and loud without distorting or sounding garbled. Its IP67 rating is the real star here, and if you’re looking for something that is easily carried around, will spend a lot of time near water or clumsy people, this is an affordable option that shouldn’t let you down.

Buy the Anker SoundCore Sport XL
Advertisement
Trusted By Millions
Independent, Expert Android News You Can Trust, Since 2010
Publishing More Android Than Anyone Else
0
Today
178
This Week
178
This Month
1452
This Year
111554
All Time
Advertisement