The Galaxy Note 5 and the Galaxy S6 Edge+ were announced by Samsung at its ‘Unpacked’ event in New York City last August, but sadly for many would-be buyers from around the world, they were not released in unison everywhere. This time around, though, things are likely to be different with the upcoming Galaxy Note 7 if all the pre-release vibes are anything to go by. Although Samsung is yet to make any official statement regarding the availability of its upcoming flagship phablet, indications are that the device will actually get a much wider release globally than either of last year’s premium phablets from the South Korean manufacturer.

One of the markets that will apparently get the Galaxy Note 7 pretty soon after the device’s announcement in New York next month is the United Arab Emirates. That’s because reports in the media seem to indicate that the handset is already up for pre-order in Dubai for an initial deposit of just 500 AED ($130). Although nothing has officially been said about when the early birds will actually get the device in their hands, most reports indicate that it will go on sale pretty soon after the August 2nd announcement. One interesting thing to note is that Samsung is offering a 128GB micro SD card with every Galaxy Note 7 pre-ordered in the UAE, but it’s not immediately known whether the company will have the same offer elsewhere around the world.

Meanwhile, as reported earlier, T-Mobile will also start accepting pre-orders for the handset in the U.S. from next week, although there’s no word at the moment on whether other carriers in the country also plan to do that at some stage over the next few days. The Note 7 is by far the most eagerly-anticipated smartphone from Samsung until now, and is expected to be unveiled officially on the 2nd of August. While none of the hardware specs of the Galaxy Note 7 has been confirmed officially, rumors and leaks have revealed a whole lot about the upcoming device, which is expected to feature an iris scanner in what would be a first for any mainstream smartphone. The device is also expected to launch with curved edges on both sides, while the S-Pen stylus is also expected to have a few software tweaks to make it more functional. 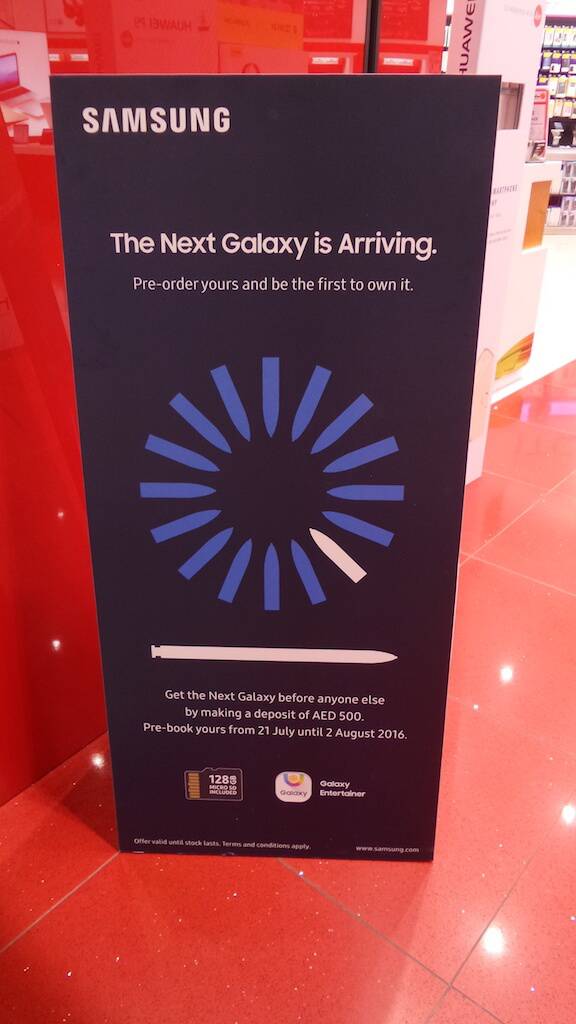