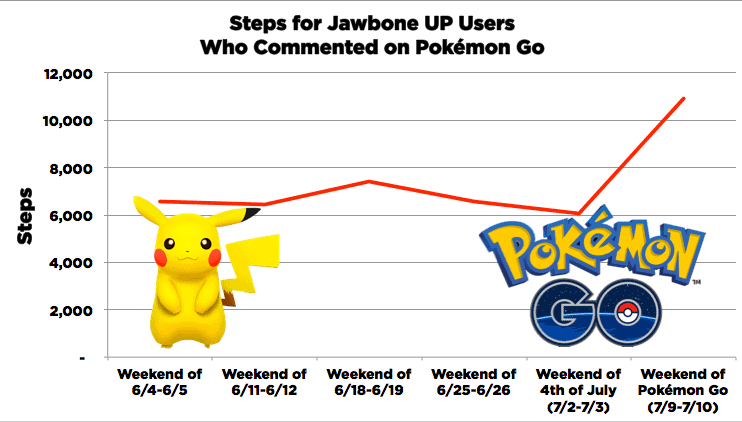 Jawbone, like Fitbit, creates some pretty popular fitness trackers. The Jawbone UP, UP2, UP3, and UP4 are fairly popular, although not as much as Fitbit's fitness trackers. Now with Pokemon Go being available in many countries around the world, and it has seemingly blown up overnight, Jawbone is now seeing their users taking more and more steps than previously. Now this shouldn't a be a huge surprise, given that you do need to do quite a bit of walking to play the game.

According to data on the company's tracker leaderboards, users have taken 8,375 steps more than normal, since the game launched last week. That's about 62.5% more than normal. That's a pretty big upswing, and it's likely all due to Pokemon Go. Now it is important to note here that this data comes from social media mentions of the game and Jawbone, and not internal data collected from every UP fitness tracker that is out there. So this is only representative of what is likely a pretty small group of Jawbone users.

Nonetheless, it is a game that appears to be getting people of all ages, outside and actually being active. Instead of sitting on the couch playing a video game all summer. Whether this was Niantic Labs' idea or not, it's definitely not a bad thing. Fitbit has likely seen a huge upswing in the number of steps taken by users since the games' launch, as well as Google Fit and other fitness tracking platforms. The game is still fairly new, having just launched a week ago, so it's still pretty popular. That will likely change over the coming months though.

Pokemon Go was developed by Nintendo, Niantic Labs and The Pokemon Company. It's loosely based off of Ingress, which was Niantic Labs first game – back when they were part of Google. In fact, if you've played Ingress and Pokemon Go, you'll notice plenty of similarities between the two. For instance, Pokestop's are all portals in Ingress. Hacking portals in Ingress is basically the same as hitting up Pokestops in Pokemon Go. And both games require a ton of walking, as well.