Do we have a good one for you today – this is an actual battle of two flagship smartphones. Both the Samsung Galaxy S7 Edge and the Lenovo Moto Z Force are solidly built, full of specs, and are priced accordingly. The Galaxy S7 Edge is running about $790, and the new Moto Z Force is tipping the Verizon scales at $720 – much more than we initially thought. The Moto Z Force is the first Moto device under Lenovo guidance from start to finish. They have taken it to a whole new level – great build, better specs, and innovative features. The Galaxy S7 Edge is a proven commodity coming to us in April – Samsung pumped it full of features as well. Before we take a close look at each device, let’s look at some of their similarities.

It is amazing how many similarities there are between the Galaxy S7 Edge and the Moto Z Force. Physically, the Z Force is slightly larger and weighs 6 grams more than the S7 Edge. The displays are the same 5.5-inch size, both are AMOLED technology, and both are Quad HD resolution. These two devices (US version) use the same 64-bit Snapdragon 820 quad-core processor and both use the Adreno 530 GPU for graphics. They both come with 4GB of DDR4 RAM and they both have 32GB of expandable internal memory. The S7 Edge and the Z Force both use a 5MP front-facing camera (FFC) for selfies and video chatting. They both are equipped with a fingerprint sensor, and they both have a large – 3600mAh in the S7 Edge and 3500mAh in the Z-Force – non-removable battery for power. They have the usual suspects – WiFi, Bluetooth (v4.2 on the S7 Edge and v4.1 on the Z Force), GPS, NFC, and a USB port (v2.0 microUSB on the S7 Edge and USB Type-C on the Z Force) for charging and data transfer. 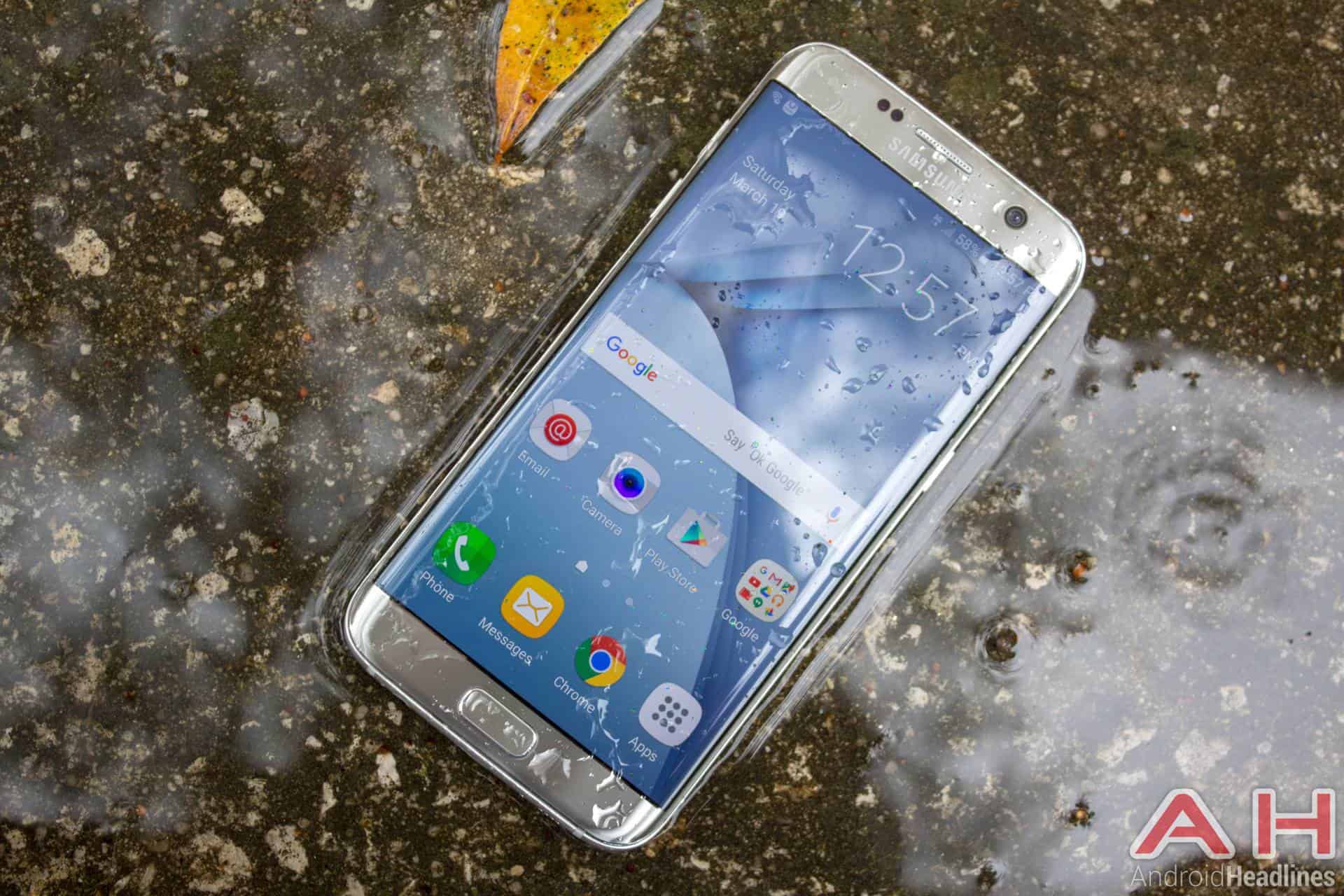 We are glad that Samsung is cutting out some of its models this year – having just one Galaxy S7 Edge is a perfect example. It retains the metal and glass design from the Galaxy S6 series along with its dual curved display. The curved screen has lost some of its ‘wow’ factor, but it is still a beautiful looking display. How does this few month old device stand up to the new Moto Z Force? Let’s take a look and see just how they compare to one another.

Samsung made significant changes in the camera area by lowering the megapixels from 16MP to a new Dual Pixel 12MP sensor – you can say what you want, but it seems to work. Samsung then increased the aperture to f/1.7, included faster phase detection autofocus (PDAF), auto HDR, and retained the OIS.  The Galaxy S7 Edge uses a 5MP wide-angle lens with a larger f/1.7 aperture and Live HDR for its front-facing camera (FFC.) This combination allows for excellent low-light selfies and video chatting. Samsung added a larger 3600mAh non-removable battery this year and included quick charge and quick wireless charging as well.

Here are some technical notes about the Galaxy S7 Edge versus the Moto Z Force. It incorporates an always-on display to help conserve battery life and uses dual curved edges that do provide some functionality. The Galaxy S7 Edge is IP68 certified water and dust resistance. When it comes to mobile purchases, you also have the option of using Samsung Pay just about anywhere you can swipe a credit or debit card. The S7 Edge packs a heart rate monitor, oxygen saturation sensor, and quick wireless charging. The S7 Edge measures 150.9 x 72.6 x 7.7mm, weighs in at 157 grams and is available in Black, White, Gold, and Silver, costing about $790, although many carriers are still offering specials.

Lenovo has owned Motorola for a couple of years now, but the Moto Z and Moto Z Force are the first models to come out under Lenovo’s guidance and under the Lenovo name. We were all a little bit curious just how the new Moto devices would look and what their specifications would be. Comparing them to the other flagships that are out, you will see that they hold their own quite well. The Moto Z Force offers a larger battery, the ShatterShield display, and better camera. A new vocabulary term is also introduced – Moto Mod. Moto Mods simply snap on the back of the device via magnets – which means there are small contact points showing when no mods are in use. The setup also allows you to add backings of different materials to give it a great look.

It looks like Lenovo is staying with the popular AMOLED display technology on the Moto Z Force, as well as the QHD resolution of 2560 X 1440 pixels. The display increased slightly from 5.4-inches to 5.5-inches, which gives it a generous 535 PPI. Moto retained ShatterShield – a nice feature to have and tests show that it works. Lenovo picked the best processor currently on the market and the same one in the Galaxy S7 Edge, the Snapdragon 820 quad-core with dual cores clocked at 1.6GHz and dual cores clocked at 2.15GHz and the Adreno 530 GPU to handle the graphics. It too packs 4GB of DDR4 RAM and offers up 32GB of internal memory that is expandable with a microSD card.

The camera area was taken very seriously and now uses a 21MP sensor with a large aperture of f/1.8. The Moto Z Force uses both laser and phase detection autofocus (PDAF), a dual-tone flash, and OIS. The Moto Z Force uses a 5MP FFC with a f/2.2 aperture, LED flash for selfies and video chatting. The Moto Z Force packs a 3500mAh battery and uses the Turbo Charger – one of the ‘Mods’ adds wireless charging capabilities as well.

The big news this year is the Moto Mods. What is nice about the Moto Mods is that they do not invade the body of the device, as they do on the LG G5, since they merely snap onto the back with magnets. The other news is that when designing the Moto Z Force, they did not include the standard 3.5mm headphone jack. The Moto Z Force handles headphones via an adapter that plugs into the Type-C reversible port to accept earphones. It measures in at 155.9 x 75.8 x 7mm and weighs in at 163 grams. It looks like pricing will be around a hefty $720 exclusively on Verizon.

Did I ever think that a device like the Moto Z Force  would beat out the Samsung Galaxy S7 Edge – heavens no! However, that is exactly what happened in this comparison. It's not the $70 difference in price, and it certainly isn't in looks, but it just seems that the Moto Z Force offers more useful features than the Galaxy S7 Edge.

The core values are the same – the same display size, both AMOLED technology, and both packing a QHD resolution. The Z-Force adds their exclusive ShatterShield glass display. The same processor powers the devices with the same amount of RAM and internal memory and both allow for expansion. The cameras are both excellent, and both have a large battery with quick charge capabilities.

While the Galaxy S7 Edge offers up a heart rate sensor and oxygen sensor monitor, the Z Force offers Moto Mods and backs that can be attached to change up its looks – something more useful and practical for most users. It just seems like Samsung churned out another S6 Edge Plus, threw in a new processor, added some memory, and called it the S7 Edge. The Moto Z Force is a marked improvement over the Droid Turbo 2 it is replacing. Some may say that Lenovo and Motorola had further to go to improve the past model, but I am still calling the Moto Z Force the winner of this comparison.