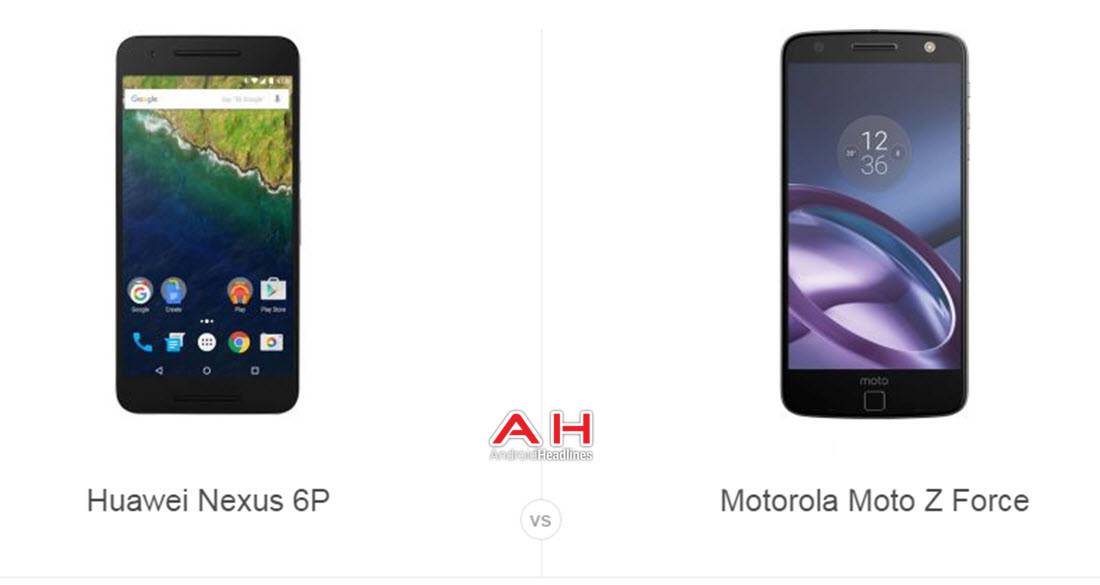 Do we gave a good one for you today – the Huawei Nexus 6P takes on the new Motorola Moto Z Force. Can the darling of the Nexus lineup take on the new Moto Z Force? These two all-metal devices are typical of what we expect in a flagship smartphone – beauty, specifications, and a solid build quality. When it comes to looks – neither device has that ‘wow’ factor like the Galaxy S7 Edge, and each has their own particularity about them – the Nexus 6P was criticized for the large hump along the back where the camera lies and the Moto Z Force has just been called ugly – but beauty is in the eye of the beholder. The Nexus 6P has turned out to be one of the more popular Nexus smartphones. The new Moto Z Force is the first Moto device flagship under the watchful eye of Lenovo – and it has a few tricks up its sleeve, called Moto Mods. Before we take a close look at each device, let’s look at some of their similarities.

The Nexus 6P and the Moto Z Force do have a few things in common. We can start with the fact that they are a very close in physical dimensions – but that makes sense as we have a 5.7-inch display on the 6P and 5.5-inch on the Z Force, as well as both are AMOLED and both use the QHD resolution. They both use a Snapdragon processor, but very different models. Both offer 32GB/64GB variants, but only the Z Force allows for memory expansion. The camera areas are totally different, but deliver great photos. They both have a fingerprint sensor for unlocking the phone and authorizing mobile payments. They both have a non-removable battery, almost the small size – 3450mAh on the Nexus 6P and 3500mAh on the Z Force. They have the usual suspects – WiFi, Bluetooth (v4.2 on the 6P and v4.1 on the Z-Force), GPS, NFC, and they both have the newer reversible Type-C USB port for charging and data transfer.

The Nexus 6P is the flagship Nexus device currently available – it was a great representation of how pure Android would run of a true flagship device, and it still can stand proud.  Nexus buyers expect a smartphone with decent specs and a reasonable price – the Nexus 5X is for those folks. The Nexus 6P is the all-metal, high-end spec’d, and higher price tag is for those buyers that always wanted a Nexus smartphone, but also do not mind paying extra for better specifications. It looks premium in any one of the four colors – Aluminum, Graphite, Frost, or Matte Gold.

The Nexus 6P sports a large 5.7-inch QHD AMOLED display with 2560 x 1440 pixels of resolution with 518 pixels-per-inch (PPI.) While Qualcomm was having heating issues with their Snapdragon 810, a newer v2.1 supposedly fixed those issues, so Huawei went with it as the brains of the Nexus 6P. It is an octa-core processor with one quad-core clocked at 1.55GHz and one quad-core clocked at 2.0GHz. It is packing 3GB of DDR4 RAM with a choice of 32GB, 64GB, or 128GB of memory – there is no means to expand.

Huawei likes to put in great cameras in their smartphones and the Nexus 6P is no exception. It has a 12.3MP sensor, laser autofocus, an aperture of f/2.0, and a dual-tone LED flash – but still no OIS. For the front-facing camera (FFC) the Nexus 6P uses a large 8MP sensor for selfies and video chatting, although it uses a smaller f/2.4 aperture. It relies on a large 3450mAh non-removable battery for its power and comes with a rapid charge feature via its Type-C plug.

The Nexus 6P does have dual front-facing stereo speakers for a great sound. Running pure vanilla Android, it will be the first to receive the new software upgrades – hopefully, Nougat will be out this fall. The Nexus 6P is sold through the Google Store as an unlocked device that is usable on all major US networks. Pricing is at only $550 for the 64GB model and offers an excellent value.

This batch of Motorola’s new Moto Z’s and Z Force are the first to come down the pike under the leadership of Lenovo. There were many questions and fewer answers, but we are happy to say that the new Motos look to be a solid group of smartphones. Both models are similar, but the Z Force – a Verizon exclusive – is definitely the headliner here with a larger battery, ShatterShield display, and better camera. It is an all-metal design that has already received some flak over its looks – it is designed to have Moto Mods attached to the back of the device via magnets and several metal contacts – some say it looks better with a Mod attached. This arrangement also allows the user to attach different backs to the Z Force to give it a distinctive look – a sort of substitute Moto Maker.

The display increased just slightly – 5.4 to 5.5-inches – and Moto stayed with the AMOLED display and a QHD resolution with 2560 x 1440 pixels and 535 PPI. The ShatterShield glass was kept – we are surprised that more devices do not use this technology as tests indicate it does work. They wisely choose the best processor on the current market – the Snapdragon 820 quad-core with dual cores clocked at 1.6GHz and dual cores clocked at 2.15GHz. The Z Force packs 4GB of DDR4 RAM and either 32GB/64GB of expandable internal memory via a microSD card.

The camera area was hurting last year, so it received a complete makeover – it now has a new 21MP sensor, a larger aperture of f/1.8, two focusing technologies (laser and Phase Detection Autofocus (PDAF)), a dual-tone LED flash, and OIS. For selfies and video chatting, Moto included a 5MP FFC with a f/2.2 aperture, and even an LED flash. A large 3500mAh non-removable battery provides power and it uses the Moto Turbo Charger for quick charges. Just a note – one of the Moto Mods does add wireless charging.

The Moto Z Force has a couple of notes – besides the Moto Mods that we will discuss, there is no 3.5-mm headphone jack. Instead, Moto supplies you with an adapter that plugs into the Type-C port and then you can plug you headphones into that adapter. Remember, the Moto Z Force is a Verizon only Droid model. Moto’s answer to LG’s slide in modules is called Moto Mods. They are designed to stay on the outside back of the device. They attach via magnets and you can attach different backs on the Z Force to give it a customized look. It measures in at 155.9 x 75.8 x 7mm and weighs in at 163 grams. It looks like pricing will be around $549.

This is a tough one, but the Moto Z Force definitely has the better specifications and deserves the win. The Nexus 6P has three things going for it – pure vanilla Android and faster updates, Dual Stereo Speakers, and it is available on all major US networks.

The Moto Z Force has as good a display, much better processor, and GPU processor. It has more RAM, expandable internal memory, Turbo Charging for its larger battery, ShatterShield display, and a great camera area.

True, you are stuck with Verizon’s network, but for the same price as the Nexus 6P, you are getting much better internal specifications and the ability to custom design the back or add a Moto Mod.