Do we have a good one for you today – the all-metal LG G5 goes up against the all-metal Moto Z Force. What is also interesting in this comparison is that both devices take on a complete redesign from their previous models. The LG G4 is a plastic device and painted to look like metal, whereas the LG G5 is an all-metal model, painted to look like plastic. The coating covers those nasty antenna lines on the back of the device and allows different colors. The Moto Z Force looks nothing like the Droid Turbo 2 that it replaces, although the looks may have to ‘grow’ on you. Another feature these two devices share are ‘Mods’ – short for modules – that allow you to add unique features to your device. With the LG G5, there is a button on the lower side that releases the bottom of the device, allowing a ‘chin’ to slide out, where you can slide in a new module – one for the camera, more battery life, speakers, etc. The Moto Z Force uses –what may be the better idea – Moto Mods that attach to the back to the device via a magnetic that align with metal contacts. You can also clip on different backs to add a different look – some say the Moto Z Force looks better with a Mod on it. Please keep in mind that the Moto Z Force is part of Verizon’s Droid series and will be sold exclusively by that carrier. These two devices do have a few similarities that we will take a look at now, and then later we will look at each device to try to determine a winner of this specification comparison.

These two devices do have a few things in common – the Moto Z Force is slightly larger, as is the display, and only weighs in at 4 grams heavier. The display is a different size and different technology, but both devices do use the QHD resolution and Gorilla Glass 4. Both devices use the Qualcomm Snapdragon 820 quad-core processor and the Adreno 530 GPU for graphics. They both pack 4GB of DDR4 RAM, both have a 32GB variant, and both devices allow memory expansion via a microSD card slot. The LG G5 and Moto Z Force each have a very good camera area, but go about it in different ways. Each device has a fingerprint sensor and packs NFC for file transfers and mobile payments. Both batteries have fast charge capabilities. They have the usual suspects – WiFi, Bluetooth (v4.2 in the LG G5 and v4.1 in the Z Force), and a Type-C reversible connector for charging and data transfers – on the Z Force, you plug in an adapter for earphones. 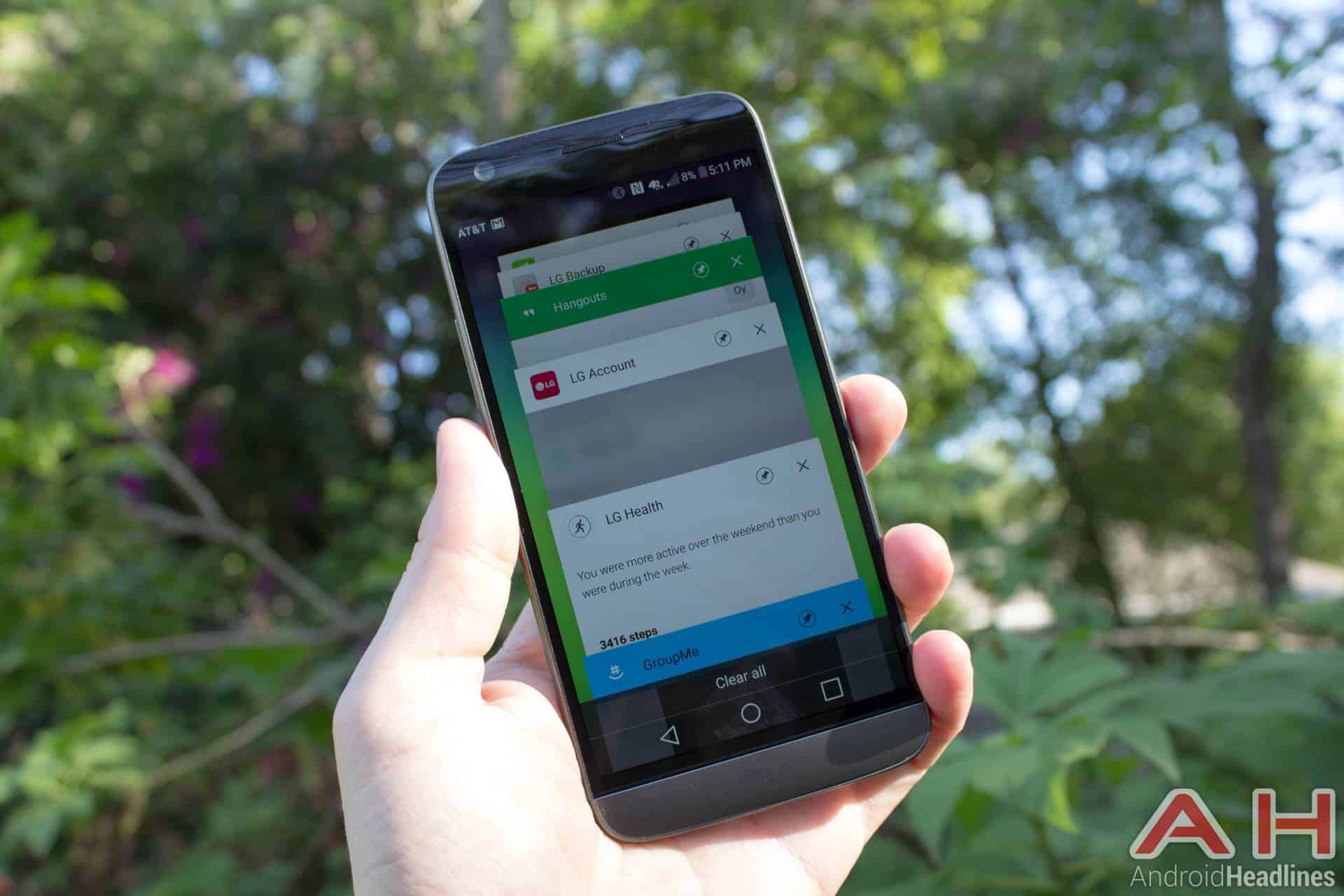 LG made some bold moves when redesigning the LG G5 – besides switching to an all-metal body – that they then painted, LG also designed the new smartphone to use modules. Both of these moves caused quite a bit of controversy, although they did allow LG to retain a replaceable battery and expandable storage. Let’s take a closer look at the new LG G5 and see just how the specs and design hold up to the new Moto Z Force – which, strangely enough also allows Moto Mods on the back of their devices.

The LG G5 continues to use at 5.3-inch IPS LCD QHD display, but now includes always-on’ – a feature designed to help save battery life. The Quad HD sports 2560 x 1440 pixels with a dense 554 pixels-per-inch (PPI.) LG went after the best processor currently on the market – the 64-bit Qualcomm Snapdragon 820 quad-core processor with dual cores clocked at 1.6GHz and another at 2.15GHz. This works in tandem with an Adreno 530 GPU to provide outstanding graphics. The G5 packs 4GB of DDR4 RAM and 32GB of internal memory that is expandable to 2TB via a microUSB card.

LG also made a few adjustments in the camera area – it comes with the same single 16MP sensor that LG used in the G4, but LG did not stop there. They also added an extra 8MP wide-angle sensor for duo cameras that work independently from one another. For normal picture taking, the 16MP shooter is used, but if the user needs to capture a wider shot in the photo, the 8MP wide-angle is used. LG kept the excellent 8MP front-facing camera (FFC) from the G4, allowing the user to take high-quality selfies and video chatting. LG retained the ability to remove the battery, although they decreased the battery size to 2800mAh. The LG G5 does have Quick Charge 3.0 capabilities.

Anytime there is a major redesign, there have to be some changes in the basic LG G5 plan. With the ‘chin’ of the device pulling out of the bottom, it was not possible to place the fingerprint sensor at the bottom of the LG G5. It was moved around to the back, and while it still acts as an on/off switch – the volume controls were removed to the side of the LG G5. LG did retain its IR Blaster and FM Radio. The LG G5 measures 149.4 x 73.9 x 7.7 mm, weighs in at 159 grams and comes in Silver, Titan, Gold, and Pink. The LG G5 is available on all the leading carriers for $625.

When Lenovo revealed their first line of the Moto Z and Moto Z Force devices – the latter is the replacement for the Verizon Droid Turbo 2, and it seems to hold its own in this saturated smartphone market. The Moto Z and Z Force devices are very similar, but the Z Force offers a larger battery, the ShatterShield display, and better camera. This year, Moto used an all-metal design, although many are not overcome with the joy of its design – many think it looks better with a Moto Mod attached to the back.

This is where the LG G5 and Moto Z Force have a similar design philosophy, only handled differently. Moto Mods simply snap on the back of the device via magnets – which means there are small contact points showing when no mods are in use. The setup also allows you to add backings of different materials to give it a great look. It seems a much better way to handle Mod(ules) than the LG’s method. Time will tell if customers go for either one of these setups – the LG G5 sales have been off from what LG was hoping.

Moto kept the AMOLED display technology, as well as the QHD resolution of 2560 X 1440 pixels and 535 PPI – the display went from 5.4-inches to 5.5-inches. Moto retained ShatterShield to prevent the display from breaking, should you drop your device – a system that seems to work. Moto (Lenovo) threw in the best processor currently on the market and the same one in the LG G5, the Snapdragon 820 quad-core with dual cores clocked at 1.6GHz and dual cores clocked at 2.15GHz and the Adreno 530 GPU to handle the graphics. It is also packing 4GB of DDR4 RAM and offers up 32GB/64GB of internal memory that is expandable with a microSD card.

Moto also upgraded their camera area that uses a 21MP sensor with a large aperture of f/1.8. Moto packed in both laser and phase detection autofocus (PDAF), a dual-tone flash, and OIS. The Moto Z Force uses a 5MP FFC with a f/2.2 aperture, LED flash for selfies and video chatting. The Moto Z Force comes with a large 3500mAh battery and uses Moto’s Turbo Charger, and one of the ‘Mods’ adds wireless charging capabilities as well.

Besides the Moto Mods – the Moto Z Force is interesting that it is lacking the standard 3.5mm headphone jack. The Moto Z Force handles headphones via an adapter that plugs into the Type-C reversible port to accept earphones – the jury is still out on that move. What is nice about the Moto Mods is that they do not invade the integrity of the device since they merely snap onto the back with magnets. It measures in at 155.9 x 75.8 x 7mm and weighs in at 163 grams. It looks like pricing will be around $549 exclusively on Verizon.

I am going with the Moto Z Force as the winner of this comparison. Its only downside may be in its looks (beauty is in the eye of the beholder) and the fact that it is only available on Verizon (again, a good option for some and a bad thing for others.) The Moto Z Force uses an AMOLED display and has Motorola’s exclusive ShatterShield to prevent damage to your device should you drop it. It also has the same processor, same 4GB of DDR4 RAM, a 64GB memory option, expandable memory, a great camera area, a larger battery – true it is not removable – but with Turbo Charging and a seemingly better way to add modules via Moto Mod. It does this all with a $75 savings in price over the LG G5.

The LG G5 is a great device, but if you can get past the Verizon exclusivity, non-removable battery, and the lack of a dedicated earphone jack, it just seems like the Moto Z Force is offering more for the money.