Do we have a good one for you today – the ASUS ZenFone 3 Deluxe takes on the new ASUS ZenFone 3 Ultra. Two all-metal designs clash to see which one of these devices can win our specifications comparison today. These are two of the three new ASUS models recently announced – today we are looking at the flagship ‘Deluxe’ variant along with the larger ‘Ultra’ model. Both models have a great design out of an Aerospace-grade aluminum alloy that hides the antenna in the edges of the smartphone and therefore eliminating the antenna lines on the back of metal devices. The Deluxe model is the higher-end design, while the Ultra model strives for a larger display with more modest specifications. Although geared toward different customers, these two devices do have a few things in common that we will take a look at now, and then later we will look at each device to try to determine a winner of this specification comparison.

Even though ASUS makes both of these devices, there is very little that they have in common except for the all-metal bodies and hidden antenna lines. Their size and weight are not even close, and they even use a different technology for the display, although they both use the Full HD resolution. ASUS tapped Qualcomm for both processors, but they are not in the same league, and neither are their GPUs. Both the ZenFone 3 Deluxe and Ultra used the faster UFS 2.0 internal memory, and both are expandable via a microSD card slot. Both devices use the same 23MP primary camera and the same 8MP front-facing camera (FFC) for a great photo experience. They both have Hi-Res audio built-in for your earphone pleasure. They both have a fingerprint sensor, non-removable batteries with Quick Charge 3.0, and a Type-C USB reversible plug for charging and data transfer. The usual suspects – WiFi, Bluetooth v4.2, GPS – are there, as well as an IR Blaster. Only the ASUS ZenFone 3 Deluxe has NFC for mobile payments.

The ZenFone 3 Deluxe is the real flagship of these two devices. However, both devices we are looking at are all-metal devices with the antenna cleverly hidden into the frame, so there are no lines on the back. It comes packing 6GB of DDR4 RAM, and you have the option of 64GB or 256GB of memory – although the 6GB/64GB model is the one we will be looking at today. ASUS changed just about everything from their ZenFone 2 design – different outside material, the brand of processor, more RAM, new and faster UFS 2.0 memory, and a better camera. For a true flagship device, it would be good to see a QHD display – but it does use Super AMOLED technology for bolder contrasts.

The ZenFone 3 Deluxe sports a large 5.7-inch Super AMOLED FHD display with the always-on feature – this helps save on battery life. The resolution is 1920 x 1080 pixels, and that produces a somewhat respectable 386 PPI. For the Deluxe model, ASUS chose the best processor available in the 64-bit Snapdragon 820 quad-core processor with a dual-core clocked at 1.6GHz and a dual-core clocked at 2.15GHz.  It works in tandem with the Adreno 530 GPU to handle the toughest of graphics. Two versions will eventually be available – a 6GB DDR4 RAM with 64GB of memory and later there will be a 6GB DDR4 model with 256GB of memory. Both versions have room to expand 128GB via a microSD card, and both models are using the new and faster UFS 2.0 memory.

The ASUS ZenFone 3 Deluxe uses the same camera setup as the ZenFone 3 Ultra – a Sony sensor, 23MP ASUS PixelMaster 3.0 camera, with a sapphire crystal lens cover, an aperture of f/2.0, dual LED flash and 4-axis OIS for incredibly steady shots. The FFC is an impressive 8MP sensor with an 85-degree wide-angle lens for selfies or video chatting. A 3000mAh non-removable battery powers the ZenFone 3, and it utilizes Qualcomm’s Quick Charge 3.0 technology. It has a rear-mounted fingerprint sensor for unlocking the device as well as authorizing mobile payments.

The ASUS ZenFone 3 Deluxe has more RAM than the ZenFone 3 Ultra, but nobody is exactly sure how the ZenFone 3 Deluxe will utilize the 6GB of RAM. The Deluxe model also has NFC that will allow it to do file transfers, including mobile payments, such as Android Pay. It is running Android 6.0.1 Marshmallow and will use ASUS’ own ZenUI 3.0 running over the top. It measures 156.4 x 77.4 x 7.5mm and weighs in at 170 grams. The colors available are Titanium Gray, Glacier Silver, and Sand Gold, and it will cost about $500 for the 4GB/64GB model. There is no pricing or availability yet on the 6GB/256GB variant, but you can be confident that it will cost a few bucks more.

ASUS’ came out with their new line of ZenFone 3’s – a midrange, a high-end, and a midrange with a Phablet-like display. The later one, the ZenFone 3 Ultra, is the one we are looking at today. While the ‘Deluxe’ model is the flagship of the three – the ‘Ultra’ is named because of its mammoth 6.8-inch display.  The ZenFone 3 Ultra is a beautiful all-metal design, and just like the other models, it even hides all of those antenna lines by cleverly embedding them in the sides of the device. ASUS changed up just about everything from last year’s ZenFone 2 design – new processor, more RAM, the new UFS 2.0 memory, and better camera. Let’s take a closer look at Ultra model and see how it stacks up against its high-end brother, the ‘Deluxe.’

There is no denying that the ZenFone 3 Ultra falls into the true phablet area – almost to the tablet area with its massive 6.8-inch IPS LCD display with a Full HD resolution of 1920 x 1080 pixels and 324 PPI. The combination of the huge screen size and the FHD resolution result in the lower pixel density that we are used to seeing in modern day smartphones. ASUS went with the 64-bit Qualcomm Snapdragon 652 octa-core processor with a quad-core clocked at 1.4GHz and a quad-core clocked at 1.8GHz and teamed it up with an Adreno 510 GPU to handle the graphics. It boasts 4GB of slower DDR3 RAM (a restriction of the processor) and 64GB of faster UFS 2.0 memory that is expandable to 200GB via a microSD card.

ASUS took the camera very seriously on their new models – the primary camera uses a large Sony IMX318 23MP (sensor) with a f/2.0 aperture, 6-element Largan lens, and 0.03-second TriTech Autofocus – that uses both Laser and Phase Detection Autofocus (PDA). ASUS even went with a 4-axis OIS for more stability and then added a dual-tone flash. The ZenFone 3 Ultra gives you an 8MP FFC with a f/2.0 aperture and 85-degree wide-angle lens for selfies and video chatting. A large, non-removable, 4600mAh battery with Quick Charge 3.0 powers the device.

The Ultra arrives running Android 6.0.1 Marshmallow with the newest ZenUI 3.0 running over the top. The ASUS ZenFone 3 Ultra has a rear-mounted fingerprint sensor for unlocking the device and dual bottom-mounted stereo speakers but has no NFC for mobile payments or file transfers. The Ultra measures 186.4 x 93.9 x 6.8mm and weighs in at 233 grams. It is available in Glacier Silver, Titanium Gray, or Metallic Pink and it will cost you about $479 with 4GB of RAM and 64GB of memory. 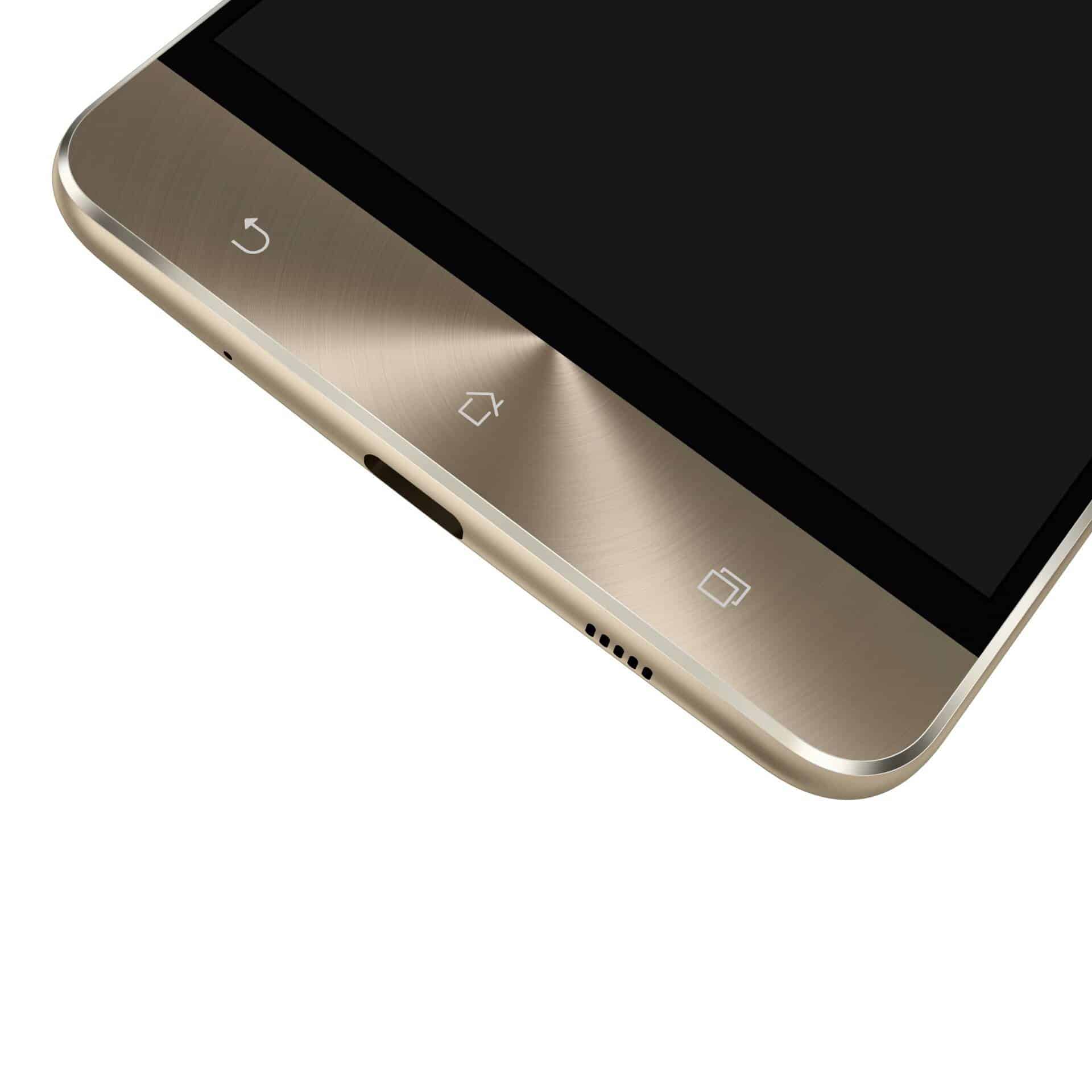 This decision is a relatively easy one for me – the ASUS ZenFone 3 Deluxe is the winner of this comparison because I would rather have a better processor/GPU and NFC capabilities than a 6.8-inch display.  Do I wish it had a QHD display – damn straight, but with a 5.7-inch display, the FHD will work and is much better than the same resolution on the 6.8-inch display on the Ultra model.

If you want a huge display and mid-range specs in a beautifully designed all-metal smartphone, then go for the ZenFone 3 Ultra. However, if you want the device with the best specifications and better display – albeit smaller – then pick up the ASUS ZenFone 3 Deluxe. Either device will cost you about the same money.