Motorola launched its 4th-generation Moto G last month, and while earlier iterations of the company’s famed mid-ranger came all alone, this year the company decided to introduce as many as three different models as part of the lineup. While the Moto G Plus happens to be most well-specced of the lot, the standard issue Moto G and the more basic Moto G Play are also two of the options that the company is offering its customers this time around. Motorola had also done pretty much the exact same thing with its Moto X line last year, having split it into three different handsets, namely, Moto X Force, Moto X Style / Pure and the Moto X Play.

So taking into account the Lenovo-owned company’s recent propensity to split its successful smartphone lines into multiple devices, it should come as no surprise that the newly-introduced Moto Z line, already with two distinct devices (Moto Z and Moto Z Force) under its belt, is all set to get a third contender that is believed to be positioned a notch below the other two in the pecking order. While there’s no confirmation from either Motorola or its parent, Lenovo, in this regard, an AnTuTu benchmark screenshot has now seemingly revealed that the next member of the Moto Z family will come with model number XT1635 and will be marketed as the Moto Z Play.

While the phone and its hardware specs have been rumored before as well, the AnTuTu leak now gives us some concrete ideas for the first time about what to expect from the upcoming handset. As can be seen from the screenshot below, the device will be powered by Qualcomm’s Snapdragon 625 chip, which comes with an integrated 64-bit octa-core CPU and an Adreno 506 GPU. The device is also likely to have a 1080p display panel that’s said to measure 5.5-inches if earlier leaks are anything to go by. Meanwhile, the AnTuTu listing also seems to suggest that the device will rock 3 GB of RAM and 32 GB of internal storage, while imaging duties will be carried out by a 16-megapixel rear-facing camera and a 5-megapixel front-facing camera. The smartphone will also have Android 6.0.1 Marshmallow pre-installed, which is par for the course for most devices right now. 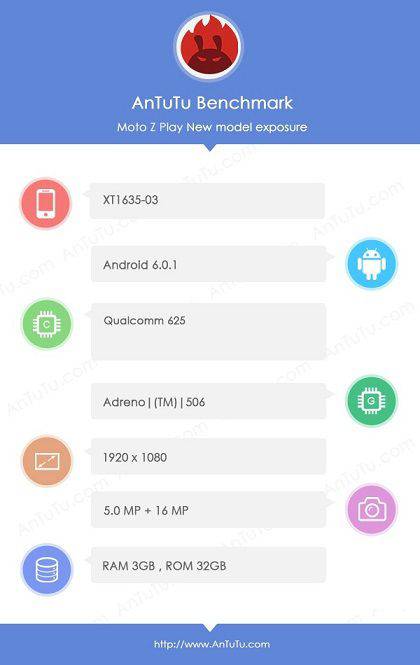