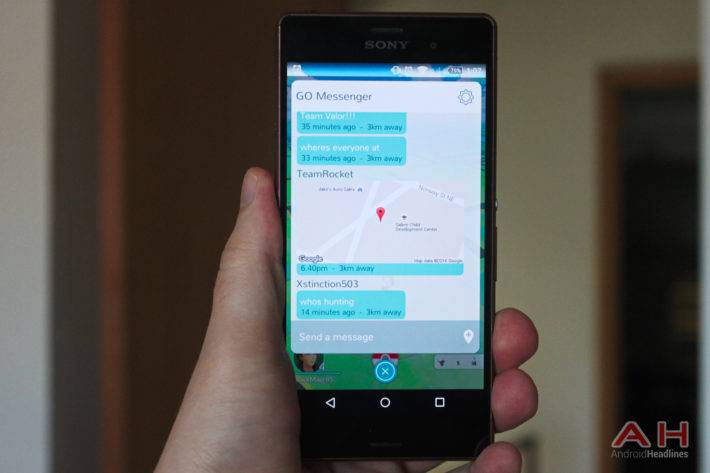 If you're new to the world of Pokemon GO, you're probably quickly discovering that there is no in-game chat option that was integrated by Niantic. With no built-in way to chat or discuss game plans with other players, users were left with outside options like Facebook's Messenger app or other chat apps such as Groupme. Not long after the initial launch of Pokemon GO however, a dedicated Pokemon GO chat popped up called GoChat. While this is a nice option, the chat is still outside the actual game. Enter Messenger for Pokemon GO, another dedicated chat app that uses a floating bubble design over the game's UI so you can play and chat at the same time.

Messenger for Pokemon GO has a chat head style bubble interface design similar to Messenger so you can always access it without having to leave or close out Pokemon GO. It's also location based just like the game, so you can chat with others around your local area. While the chat app is not quite feature-rich as it just launched, new features are certainly planned. The app's design also closely matches if not mirrors the UI design of Pokemon GO, so it's aesthetically pleasing and fits right in with the game just as if it were developed and designed by Niantic themselves.

For all its perks, though, the app does have a few flaws which users should take note of. The design is great, as it fits the game's UI style, and location-based chat is sure to be useful to many Pokemon trainers out there, but there is no option to chat directly with other trainers. If you have friends that play, there's no option to hit them up while you're both out and about in-game searching for new Pokemon. This also makes it difficult to organize any such outings for players of the same team who may want to chat privately. If this particular trait doesn't bother you, Messenger for Pokemon Go does allow you to increase or decrease the distance of your location radius, so if you and your friends are all within a small enough area, you can potentially minimize the amount of people who see any messages that are displayed. The app also lets you share your location, so if you want to let a friend and fellow trainer know where you are, you can simply tap the map pin to add your location at any time, which ends up displaying a Google Maps image in the chat window. The app is free and is already live in the Play Store, and you can grab it below if you want to give it a shot.