Skip to content
Advertisement
Trusted By Millions
Independent, Expert Android News You Can Trust, Since 2010
Publishing More Android Than Anyone Else
0
Today
110
This Week
471
This Month
4500
This Year
114530
All Time
Advertisement Chinese phone maker Meizu has been particularly active this year, launching a series of smartphones with varied specifications to lure in budget and mid-range phone buyers. However, a recent development indicates that the company is planning to diversify its range of devices to expand its global footprint. Earlier today, Meizu posted an image on Weibo, a popular Chinese social media network many will have heard of, which showed sketches of a smartwatch with a round design and with a number of different watch faces and strap options. While there hasn’t been any official announcement by Meizu as far as launching a smartwatch is concerned, a number of companies post a series of suggestive teasers before launching their new products, so Meizu could be following the tried and tested game plan here.

What we can infer from the sketches is that there could be three variants of the watch with their own strap options. While one looks a lot like a premium sports watch with a large dial and probably waterproof features, the others seem more casual and suited to female buyers or those who prefer less sporty watch designs. The sketch also indicates that the watch may arrive with a number of fitness tracking capabilities like tracking your runs and measuring your activity durations. If the watch does surface, it might arrive as another low cost option for potential smartwatch buyers who must be looking forward to Samsung’s Gear S3 and Apple Watch 2 wearables which may launch in September.

As of now, it isn’t clear when Meizu will launch the smartwatch or if the device will even be available outside China. However, given that the company has offered an initial indication, it may follow it up with more teasers or an official announcement soon. You may also come across a series of rumours and speculation on the smartwatch, some of which may deserve to be taken with a pinch of salt. The company has already launched devices like Meizu M3, the M3 Note and the Meizu Pro 6 this year and more recently the Meizu MX6. With IFA just a couple of months away, Meizu may launch its smartwatch and other devices and accessories at the event but we’ll have to wait and see for now. 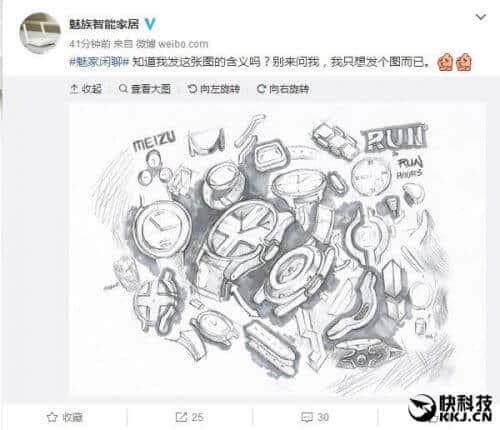