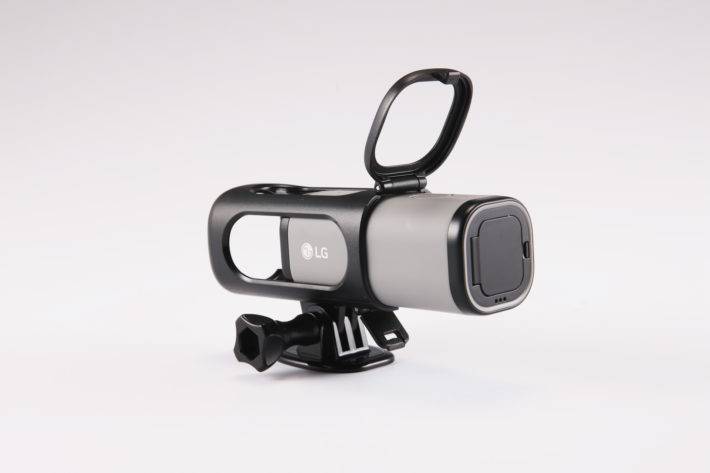 Today, LG has just announced the launch of the LG Action Cam LTE in its home country of South Korea. Back at Mobile World Congress at the end of February, LG announced the LG G5, its latest flagship device which would usher in a completely new way of doing things for the company in regards to high-end smartphones. The LG G5 was built upon an idea of modularity in that it could have attachments, called "Friends," which could be affixed to the bottom of the phone to enhance its capabilities and features. Of course, not all of the Friends products were devices which you could attached to the bottom of the phone itself, and instead could simply be connected through other means, such as the VR headset, as well as the LG Action Cam LTE which was announced back in the middle of May.

The LG Action Cam LTE, as the name suggests and as one would likely expect from such a product, is meant to be a standalone device which can be used to capture pictures and video similar to the way a person might use a GoPro. While it can be connected to the likes of the LG G5, it can be used on its own to record video and snap pictures. It has integrated LTE connectivity and is powered by a Qualcomm Snapdragon 650 processor. Because of the hardware and the ability to connect to cell networks, the LG Action Cam LTE enables users to record video and stream it live over 3G and 4G connections to services like YouTube.

Indicative of the word "action" in its name, the camera comes with an IP67 rating making it water-resistant and capable of being immersed in up to 1 meter of water for a 30-minute time period. The IP67 rating also makes it dust proof and sand proof, setting it up to be the perfect companion for an adventure that's filled with action whether that be cruising the lake on a wake board while being pulled by a boat or riding the dunes on an ATV out in the middle of a desert. The LG Action Cam LTE is equipped with a 12.3MP sensor that carries a 150-degree wide-angle lens and is capable of recording video in UHD at 30fps. It can also handle recording in Full HD at 30fps and 60fps as well as HD resolution at 30, 60, and 120 fps. The Snapdragon 650 CPU comes paired with 2GB of RAM and 4GB of internal storage, and it supports expandable storage up to 2TB via microSD. The camera's design gives it a more rugged build meant to be used constantly while outside, and although it does come with its own mount, LG does state that it is compatible with various third-party mounts as well. They also highlight that it's capable of being used as a home monitoring camera, with videos saving directly to a connected smartphone through the companion app that can be download from Google Play. While launching today in South Korea, the camera is not available elsewhere just yet, although LG does have plans to launch the Action Cam LTE in other markets in the weeks ahead. They have not mentioned price as the cost for each market will be announced locally where the device is sold.