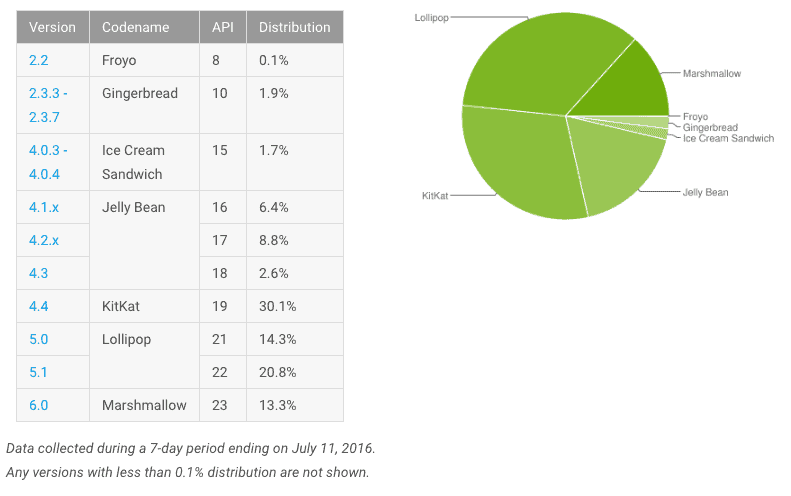 Each month, Google releases updated numbers for Android Distribution. This is located on the Android Developers website, and its sole purpose is to allow developers to see which versions of Android are still popular. Helping them decide how far back their apps and/or games should support. Typically, the newer versions of Android see smaller numbers, and that’s due to how long updates take to reach many of these devices that aren’t made and updated by Google. This data is collected during a 7-day period that ended on July 11, 2016, from devices that accessed the Google Play Store during that time period.

As you can tell from the chart above, Froyo is still hanging on. Sticking at 0.1%. With Gingerbread coming in at 1.9%, Ice Cream Sandwich at 1.7% and Jelly Bean with a whopping 17.8% (that’s Android 4.1, Android 4.2 and Android 4.3 combined). KitKat still holds a pretty big portion of the market, in fact it holds around a third of it at 30.1%. While Lollipop holds 35.1% and Marshmallow tops it off at 13.3%. Gingerbread, Ice Cream Sandwich, Jelly Bean and KitKat all continue to get smaller, while Lollipop and Marshmallow continue to grow. This is mostly due to new smartphones coming out running on Android 5.x Lollipop and Android 6.0 Marshmallow.

Now these numbers still need to be taken with a grain of salt. While the percentages seem to be slowly getting larger for Marshmallow, month after month, that doesn’t mean that there are barely any smartphones running Marshmallow. There are over a billion Android smartphones activated a day. So as the pool of Android smartphones grow, the percentages get smaller per device. And it’ll continue to be that way. With Android 7.0 Nougat coming out in about a month or so, we should be seeing Marshmallow start to grow a bit more, while Nougat will definitely struggle in the first few months – especially since it’ll only be available on Nexus devices, which aren’t the most popular smartphones out there.

This is where the fragmentation argument comes in, for Android. As you see, about a third of the Android population is on an OS that is about three years old. Google has made some changes to Android to change that, but so far it hasn’t made much of a difference.