Smartphones have always had a reputation for being somewhat distracting devices, with the texting and driving epidemic being hard evidence that the devices and the things that they can do can be such a distraction that people are willing to risk their safety for them. Obviously, with Pokemon GO fever sweeping the nation, the hot new game around town is no exception. A disclaimer shows on the splash screen of the game, but nobody should be surprised to learn that people are walking blindly, getting robbed and now, inevitably, playing while driving with predictable results.

According to a police report from the city of Auburn, New York, a man who decided that behind the wheel was a good place to engross himself in his quest to catch 'em all got a bit more than he bargained for. Rather than a Pikachu or Charmander, the would-be Pokemon master driving near 144 Owasco Street in Auburn had a close encounter with a tree at about 10:44 PM on July 12th. The report by the Auburn Police Department did not specify the extent of his injuries, only saying that the driver was injured and that his injuries were not of a serious nature. The accident is still under official investigation, but seems somewhat straightforward. The police warned that accidents can happen very easily when distracted driving is taking place.

Not only is there a warning in place upon launching the app, there are numerous laws against using a mobile device while driving in most areas of the world, let alone in the United States. On top of that, Pokemon GO is made to discourage cheating by driving with the app active, not allowing players to incubate eggs past a certain speed and turning off some game features, though PokeStops and wild Pokemon can still be interacted with, with a bit of skill and luck. Hopefully, Niantic and Nintendo will implement some fixes to discourage this sort of behavior in the future, but in the mean time, incidents like this will hopefully serve as a warning to help common sense prevail. Those playing it safe on the sidewalks may want to keep an eye out while playing in order to avoid being involved in an accident with somebody who is a bit less aware of their surroundings. 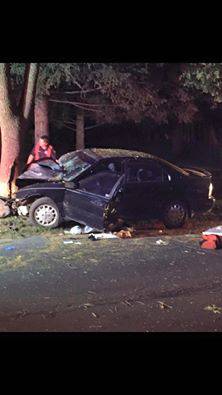