When word got out that the Lenovo Moto Z would feature a modular design, many were understandably skeptical. Questions of how the mods would work, which would be available at launch, and if they would work with future models all came up in short order. Among the many questions, some out there were certainly wondering about developer advocacy and how Moto would help out third-party makers of modular hardware, called Moto Mods. With the official release of at least the Verizon variant upon us, it would seem developers have gotten their answer, and it’s a pretty favorable one.

While they don’t seem to be going all out like Samsung did on the software side with their Made for Samsung initiative, Moto is offering developers a website with most of the information that they will need to get the basics down and make their idea work. Moto’s developer website for Moto Mods is live, and it includes a huge amount of goodies for would-be developers, including end-to-end, hand-holding examples that developers can either use as tutorials or even base their own mod creations off of. A full breakdown of how Android software and the Moto Z hardware interfaces with Moto Mods is provided, making it easy for developers to figure out exactly how they would implement their grand idea before committing to a project or even buying a testing unit.

The star of the show, however, is the MDK, or Mod Development Kit. Pictured below, this is a complete, self-contained prototyping system that literally couldn’t get any simpler. Developers simply use the included template card to solder their component array to the board, then throw the included cover over the whole thing to take it along with them for their day and give the module they’ve built a good round of testing. Using the MDK provides mod developers with a ready-to-use template, saving them the trouble of ensuring that their creation doesn’t block off the wireless antenna, camera, speakers, microphone, or other hardware, or interface poorly with the Moto Z itself; the MDK includes connector pins on the board, allowing developers to prototype their idea almost as fast as they can get it onto the paper. An idea, a blueprint, and a soldering iron is all it takes. From there, developers can test their creations, then partner up with Moto to get them mass produced and shipped out. If you’re a hopeful Moto Mod developer, you’d do very well to head through the source link. 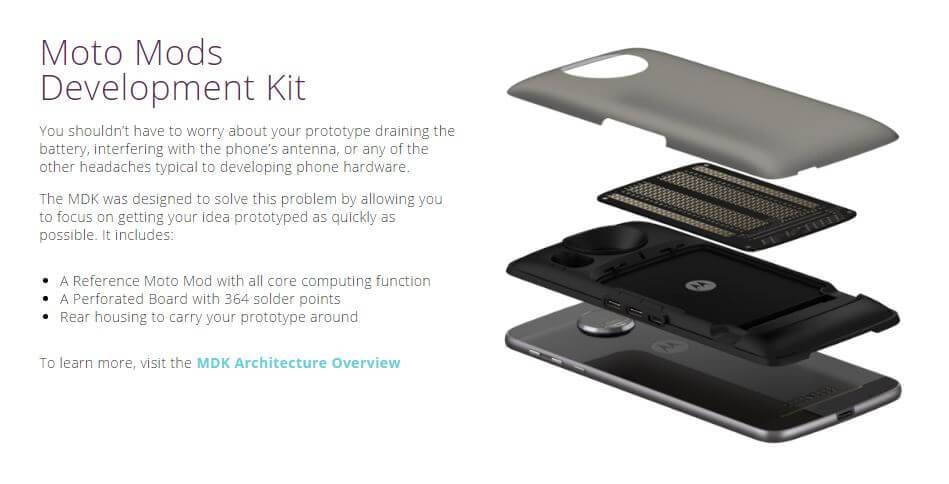