AT&T has just announced their earnings for the second quarter of 2016, which ended on June 30th. The wireless carrier posted 2.1 million net adds on the wireless side, for the quarter. They stated that these adds were driven by connected devices, Cricket (their prepaid brand) and their business in Mexico. The company also posted a postpaid churn of 0.97%, stating that is their second-lowest churn rate ever. When it comes to DIRECTV, the company posted 342,000 net adds, and 38,000 global TV net adds. That gives them nearly 1 million satellite net adds since acquiring DIRECTV.

AT&T’s CEO, Randall Stephenson said in a prepared statement that his company’s results from the second quarter “continued our strong track record of delivering revenue, adjusted earnings and free cash flow growth. This steady execution done at scale gives us the financial strength to grow our business while returning substantial value to our shareholders.”

Posting 2.1 million net adds in a quarter is nothing to sneeze at. But it is worth noting that a big chunk of these net adds are from their business in Mexico (1.4 million net adds in the US). Which makes it a bit tough to compare to the other carriers here in the US, where they are only including customers in the US, and not Mexico too. Additionally, their prepaid brand Cricket, has been doing very well for AT&T. This shouldn’t be a big surprise, after all Cricket has been running some great promotions lately, and competing pretty tough with their competitors like Boost Mobile, Virgin Mobile and MetroPCS. 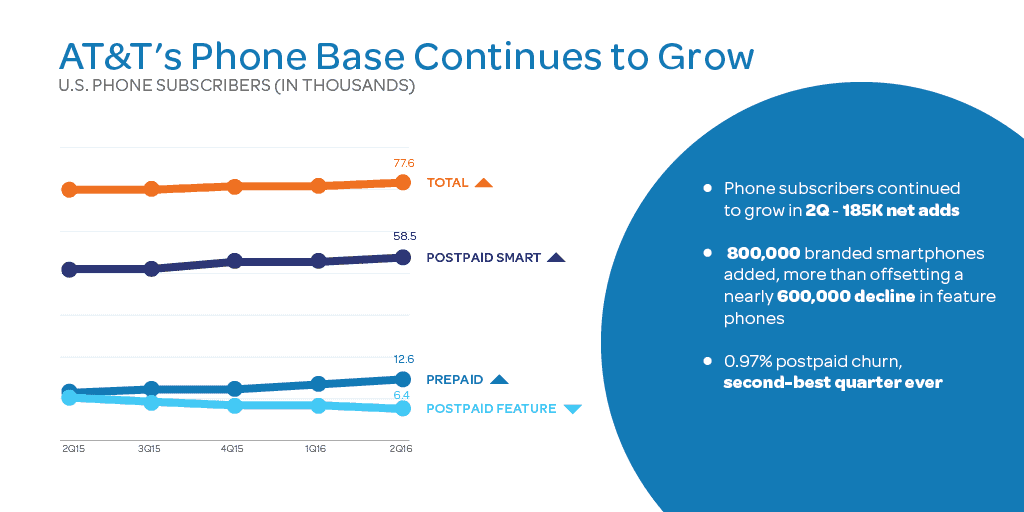