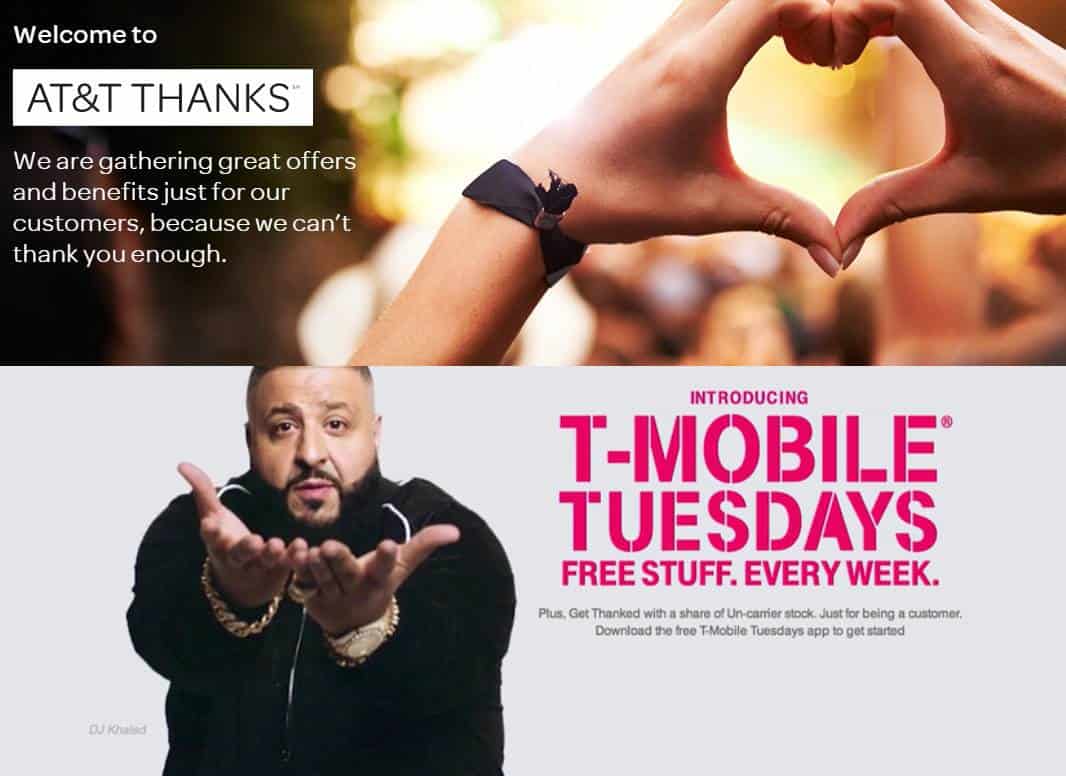 The carriers in the US do seem to be locked in an ever-ending battle to prove who is the best carrier. While this used to be determined (or at least claimed) based on coverage, network and general cell phone-related measurements, more recently the battle has moved towards a 'who is the friendliest' battle. More specifically, who is thanking the customer the most and the best.

During the last T-Mobile uncarrier event, T-Mobile made it clear that customer appreciation was the name of the game with the launch of a number of services designed to thank the customer. Like for instance, T-Mobile Tuesdays which comes in an app form and allows customers to get certain freebies like a pizza, a ride with Lyft, a movie rental or even a free ticket to the movies. Coincidentally, AT&T this week finally launched their latest 'thanking the customer' move by introducing a promotion where AT&T customers can get a free ticket to the movies on Tuesdays with AT&T Thanks. Needless to say, the two promotions do seem to echo each other, which means it was always inevitable that a war of words would start soon enough. Which now exactly seems to be what is happening

According to FierceWireless, an AT&T spokesperson was noted commenting on how rushed the T-Mobile initiative was put together, with the emailed comments reported as "After announcing our AT&T Thanks program first, TMO clearly rushed to put out an app that is riddled with problems" and further adding "After four straight weeks of missteps, seems like the pressure is on TMO to build an app their customers can actually use." While on the other side of the carrier fence, T-Mobile's John Legere was noted in a recent call with the media as essentially saying the same thing about AT&T. According to the details, Legere stated "I think that the AT&T announcement is the funniest thing that I've ever seen" while further adding that the AT&T announcement on the free Tuesday movie ticket "was the most shoddy, quickly thrown-together task force-oriented thing that stuck a 'Tuesday' on it because of a rumor and a leak that they heard."

So as to be expected, not only has the battle grown to be one where the carriers are offering much of the same freebies, but the debate is now raging as to who came up with the idea in the first place. According to the comments being reported, both T-Mobile and AT&T view the idea as theirs and the other as effectively copying them. Interestingly, both seem to view the other's version of thanking the customer as rushed and hurriedly put together.