Yesterday, the Xiaomi Mi Box was reported as passing through the FCC. This is typically a good indicator that a product is nearing its release state. Which only leaves one mystery left – what the price will be? While price is always a major selling point (or hurdle) for a newly arriving product, the price of the Xiaomi Mi Box is likely to be the most determining factor in whether this proves to be a successful Android TV product or not. If priced right, the Mi Box will enter the market in a very compelling (and vacant) position and will likely cement its role going forward as one of the staples of the Android World. If priced too high, it seems very unlikely to gain any traction with Android TV customers and especially in the US.

The problem the Mi Box faces with price is the already-dominant standing of the NVIDIA SHIELD. Which means that the Mi Box already has a ceiling price. The SHIELD retails for $199.99 for the 16GB base model, although it can often be found for $175 and even as low as $150 during peak deals. So even while $200 could be considered the ceiling entry price for the Mi Box to compete with the SHIELD, that will be too high of a price. The NVIDIA SHIELD is not a new product and is one which has been on the market for some time and like any aging product, it is likely to see the number of times it enters a deal stage becoming more frequent. Not to mention, if Xiaomi does bring the Mi Box out at around $200 then NVIDIA would instantly likely drop the price permanently down to $175 or lower. Which in spite of it being an older product would still be a more attractive purchase.

This is largely because it is a more powerful device. Even though the $199 version of the SHIELD is considered the base model, it is still one which boasts twice the storage compatibility of the Mi Box and that is without even bringing up the including microSD card support, the ability to use external storage solutions and the ability to mount NAS devices. So the fact that this is a base model is a non-starter. While the Mi Box is expected to offer expandable storage, how expandable it will be remains to be seen, but with only 8GB internal storage, this will not be a selling point to buy the Mi Box over the SHIELD. Then there is the processing capabilities of the units with the Mi Box said to come with a quad-core Cortex-A53 2.0 GHz processor and a Mali 450 GPU, which will be going up against NVIDIA’s own Tegra X1 processor with a 256-core Maxwell GPU. RAM on the Mi Box comes in at 2GB while the SHIELD offers 3GB RAM. 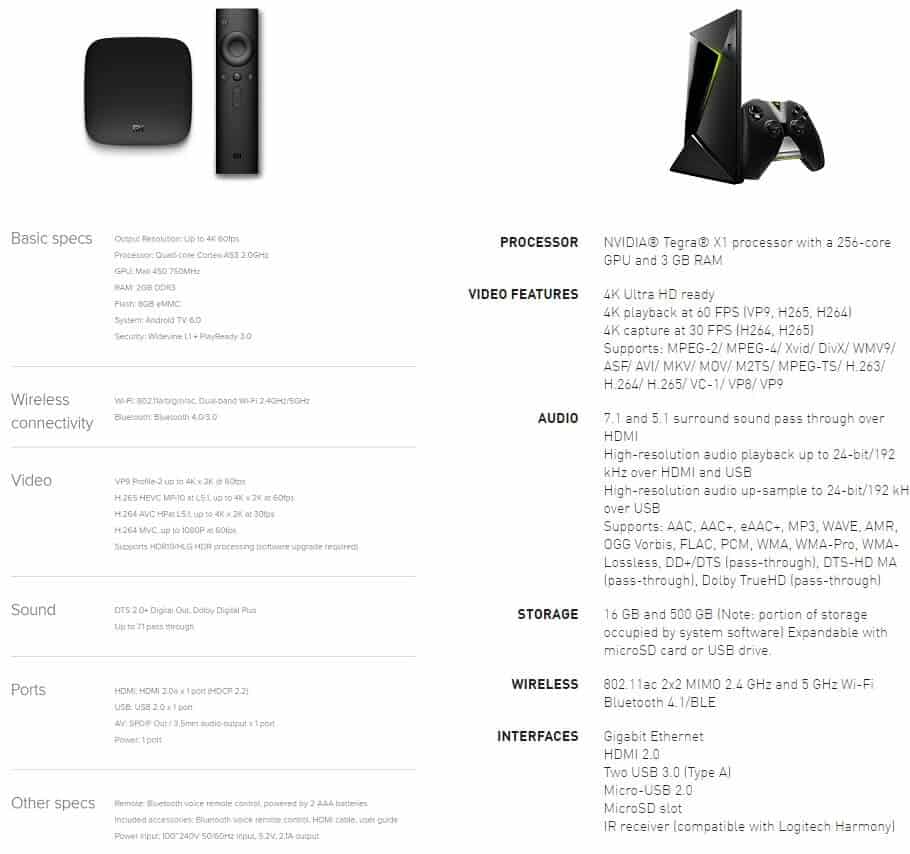 And these are just the hardware differences. When you then factor in the features, the issue for Xiaomi becomes even more apparent. From what has been seen from the Mi Box so far, we are looking at a rather stock Android TV experience and certainly when compared to the SHIELD, which comes boasting a highly customized and unique interface. The SHIELD offers an unrivaled gaming experience with all the same games you will have available on the Mi Box, as well as access to GeForce NOW, NVIDIA exclusive titles and GameStream. Of course, the Mi Box does offer 4K playback at 60fps, but so does the SHIELD. And now the SHIELD also has the ability to act as a standalone Plex Media Server. Which arguably makes the SHIELD a far more powerful media player than any Android TV option available, including the incoming Mi Box.

Again, these are just the headline features and one further additional advantage the SHIELD has over any incoming Android TV device is the benefit of being on the market for a longer period. This has resulted in NVIDIA receiving a good deal of feedback from its users and has seen the company adapt the system to be more in line with what their customers want. This has come in the form of software tweaks, as well as exclusive apps like VUDU in the US and the BBC iPlayer in the UK. The Mi Box will be hitting the market in a debut product form and will likely be considered as offering a simpler and more basic user interface.

So when all’s said and told, price is the only selling point that the Mi Box can make use of to establish a presence in the already dominated Android TV market. It is arriving as a lower spec machine than the SHIELD, it is arriving with a less-involved user interface than the SHIELD and as a less feature-rich option than the SHIELD. So even pricing the Mi Box in the US less than the SHIELD will be a hard sell. It will need to be substantially less and this means breaking the $100 barrier. Even at that price, if the SHIELD starts to normalize a lower pricing point (for instance around the $150 marker), it will make the Mi Box a difficult product to justify the $50 price difference. To be fair to Xiaomi, this is the issue now for anyone who wants to bring an Android TV device to the market. The SHIELD has set a very high benchmark and we have already seen $99.99 units like the Nexus Player drop to as low as $25 at times before fading away. The market needs a strong contender for the sub-$100 price bracket and the Xiaomi Mi Box has the potential to be that product and establish its presence as the go-to $100 box. But that does mean it cannot be priced beyond $100.