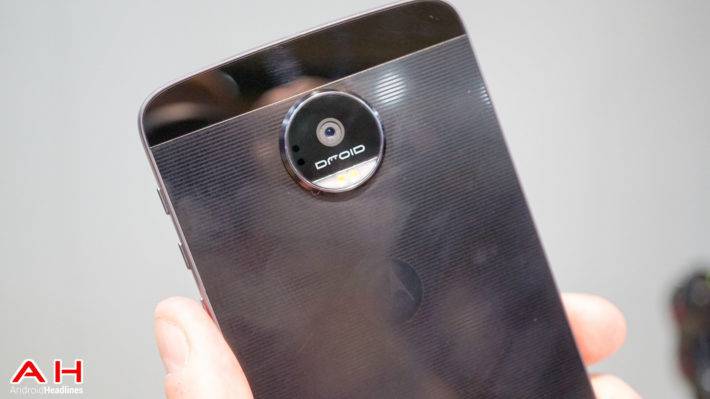 The Motorola Moto Z series was officially introduced last month at Lenovo Tech World, and both the Moto Z and Moto Z Force took the mobile world by surprise thanks to their unique modular design. Of course, there is more to the new Moto Z series beyond its modularity, but either way, prospective customers will have to wait until sometime in September before they’ll be able to buy one of the two new contenders. However, despite the fact that the Motorola Moto Z series hasn’t been launched yet, a new rumor recently emerged in regards to the Moto Z lineup in 2017. Specifically, next year Motorola will allegedly focus on improving the camera on the next-gen Moto Z by fitting larger pixels and allow for more light to enter the camera lens.

The Motorola Moto Z is equipped with a 13-megapixel camera, while the Moto Z Force makes use of a more generous 21-megapixel unit. Both cameras have an f/1.8 aperture and benefit from laser autofocus as well as optical image stabilization. As far as the Moto Z Force is concerned, it almost seems like Motorola is competing with last year’s flagships, most of which were aiming at a higher camera pixel count in hopes for better image quality. This year, however, several Android smartphone manufacturers have switched gears and chose fewer, but larger pixels for their flagships’ cameras and the results have been quite beneficial. Now, although the Motorola Moto Z and Moto Z Force have yet to hit the shelves, Internet leakster going by the Twitter handle @Ricciolo1 recently tweeted that the Motorola Moto Z lineup in 2017 will offer a different camera configuration, featuring fewer but larger pixels, which should, in theory, lead to better photography in low light conditions and otherwise. Furthermore, the source adds that the 2017 lineup will continue to make use of laser autofocus and optical image stabilization.

Needless to say, it seems too early to discuss the 2017 Moto Z smartphone lineup considering the fact that the 2016 models have yet to be released on the market. With that being said, although it’s logical to assume that Motorola and Lenovo will try to further improve the camera quality of its future models – especially in low-light photography where every respectable smartphone maker is making progress -, we encourage readers to treat the information accordingly and keep a proverbial pinch of salt nearby. 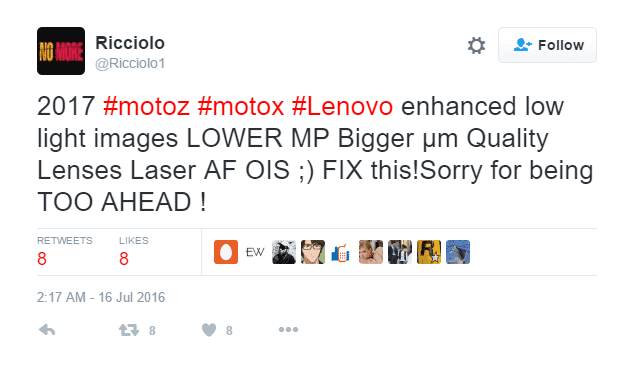