When in the process of creating a phone, a good way to verify most of the hardware works as it should is to run a benchmark. Geekbench, one of the more popular benchmarks for Android, puts all scores up publicly, making it a great source of specs for upcoming devices, though many important details like device size, battery power and the presence or lack of MicroSD and dual SIM slots are missing from Geekbench results. In any case, the latest device to see itself put out by Geekbench is reportedly from Xiaomi, and is being referred to as the “markw”, presumably an internal name.

The leaked device specs peg this new phone as a solid mid-ranger, sporting a Qualcomm Snapdragon 625 processor, which could mean support for Tango and Daydream VR, though that’s certainly no guarantee. That processor is backed by 3GB of RAM, and that’s about all she wrote. The Snapdragon 625 is far from top of the line, but it’s still a beast. The one on show here, clocked at 2.02 GHz and sporting 8 cores, manages to pull down a respectable single core score of 923, with its multi-core score skyrocketing to a cool 4,537, which reflects some great teamwork from processor cores roughly half as powerful as those found in the Snapdragon 820. The Adreno 510 superstar GPU is on board to level the playing field, making this mystery device nearly as good for hardcore gaming outside of emulators as its flagship counterparts. The memory performance averages around 3 gigabytes per second in tests, meaning this device will have very snappy response times when multitasking or cracking open new apps.

For the time being, these Geekbench results are all that is known about this mystery device, with no verification that it’s even from Xiaomi, since the tester’s name is not shown on the results. If it is from Xiaomi’s camp, we could be looking at a followup to the Snapdragon 801-packing Mi Note, which is rumored to see more than one successor this year, reportedly set to drop in July. Given the time frame and significant boost in power while using budget parts, most notably the choice of a Snapdragon processor over MediaTek options, this would be the most credible guess at this point. If this mystery device intrigues you, head through the source link to check out the full test result. 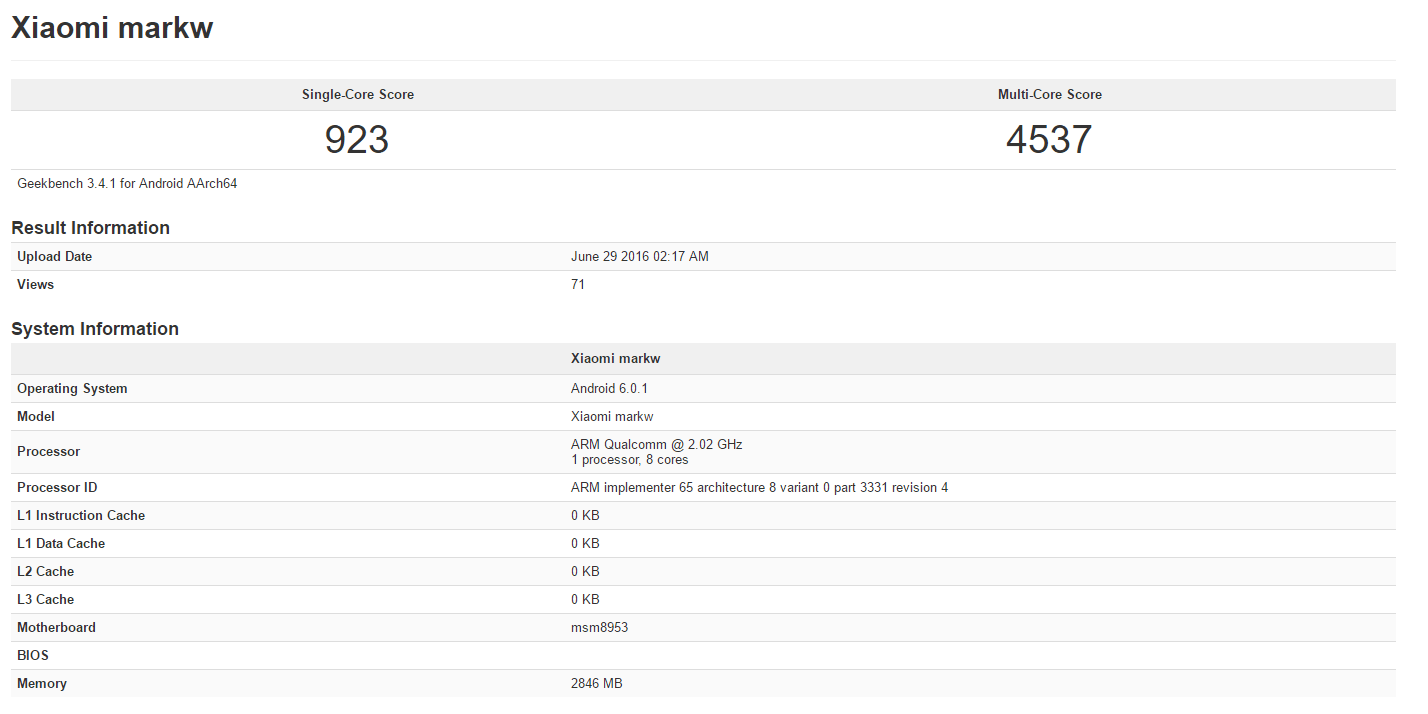