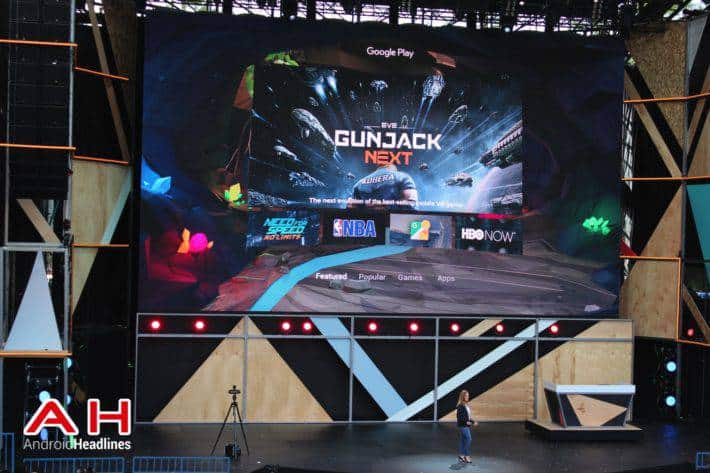 Google's Daydream VR platform is not quite ready for the public, although Daydream has been rumored to launch this November, and having said that, there are already a number of games lined up ready to take advantage of the platform and the technology. Initially announced back at Google I/O this year which was just a couple of weeks ago, the Daydream platform is going to be open to manufacturers with a number of OEMs already on-board to create hardware, but Google will also be launching their very own Daydream VR headset that comes with a compatible Daydream controller. For those that are interested in Daydream and what it will have to offer, especially on the gaming side of things, here are five upcoming games for Daydream to look out for. Out of the list of currently announced titles, one of the most standout has to be EVE: Gunjack Next, a game that will launch exclusively for the Daydream platform which should widen its appeal and allow it to pick up more players. EVE: Gunjack Next will allow players to control a ship in a first-person space shooter as they battle enemies, similar to the original EVE: Gunjack that was launched on Samsung's Gear VR.

Another upcoming game worth looking forward to is the acclaimed and most recently launched Need For Speed title on mobile, Need For Speed No Limits, which is also set to hit Daydream VR. There isn't much detail about Need For Speed No Limits for Daydream yet, but the rumor is that Google is looking to make the gameplay experiences longer and more involved, moving away from shorter races as well as micro transactions, as they seemingly want it to feel more like a console experience. How much different the game will look and feel from the Android version is unclear, but those who are able to pick it up via a Daydream headset likely won't mind the longer play style and lack of IAPs. Fans of role playing games may want to be on the lookout for an upcoming game called 'Dungeon,' created by Epic Games using Unreal Engine 4. Much like you might expect, Dungeon immerses you in a fantasy world where you can cast spells and battle all manner of enemies like giant spiders, bats, and a range of other monster-like creatures. It supports use of the Daydream controller which is you can interact with the world around you, whether that be aiming your wand and casting a spell at an enemy or picking up a potion to refill your health, or even interacting with a closed door to proceed to a new location in the game.

A similar title yet also very different in gameplay style that you'll want to keep an eye on is Underworld Overlord, which mixes fantasy and role playing elements with tower defense and strategy. It's being compared to the likes of Dungeon Keeper, which lets you build up various traps and defenses to fend off monster and other enemies. It also looks visually impressive and should be fun for those that are fans of this type of game. If everything up until now has been too serious for you and you were hoping for something a little more casual, the last upcoming game to watch that will hit the Daydream VR platform is called DayDream Blue, which is more of an exploration game that has mini-games weaved in. It's said to have multiplayer elements through online interaction with other players too, so if you enjoy games that you play online with others in the same world this should be a fun one. While there are only five games highlighted here, there will be many more for the platform, so if you love games there shouldn't be a shortage of options.