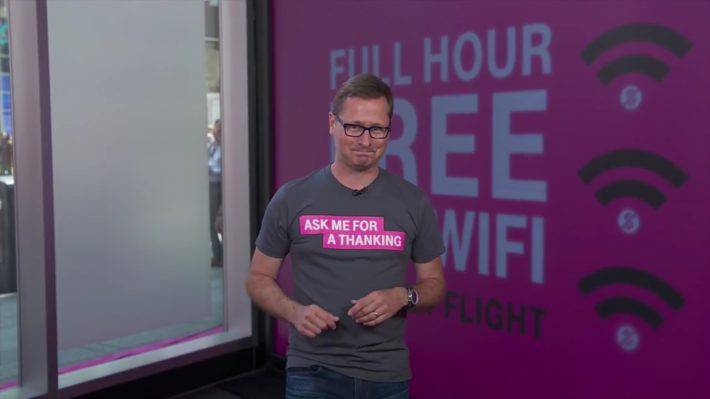 Today is a big day for T-Mobile customers as the carrier has now announced the details of its latest 'uncarrier move' during Un-Carrier 11. Some of the details of this latest move had been previously rumored over the last month and it looks as though those rumors were generally on point with T-Mobile now confirming that they have launched a new T-Mobile Tuesdays app which provides T-Mobile Customers with a number of freebies on a weekly basis, as well as the chance to win bigger prizes. The other main part of the announcement was the confirmation that T-Mobile customers can also pick up shares in the company. While one share will be initially offered to those who download the app, each customer will be able to get up to 100 shares per year in exchange for referrals.

In short, T-Mobile customers who take a flight in the U.S. will now be able to make use of one hour of free Wi-Fi while in flight. According to the details, this one is open to all T-Mobile customers and is redeemable on all Gogo-equipped flights. The service will begin on June 13 and following that date, if you are a T-Mobile customer you will be able to make use of the free one hour of surfing on your smartphone. This works as an extension of the already available ability for T-Mobile customers to text on Gogo-equipped domestic flights and speaking of which, the ability to send messages for free has also now also been extended with Un-Carrier 11. As a result, those who currently make use of the likes of iMessage, Google Hangouts, WhatsApp and Viber will be able to send messages for free using those services on all Gogo-enabled domestic flights. This is in addition to the one hour free Wi-Fi.