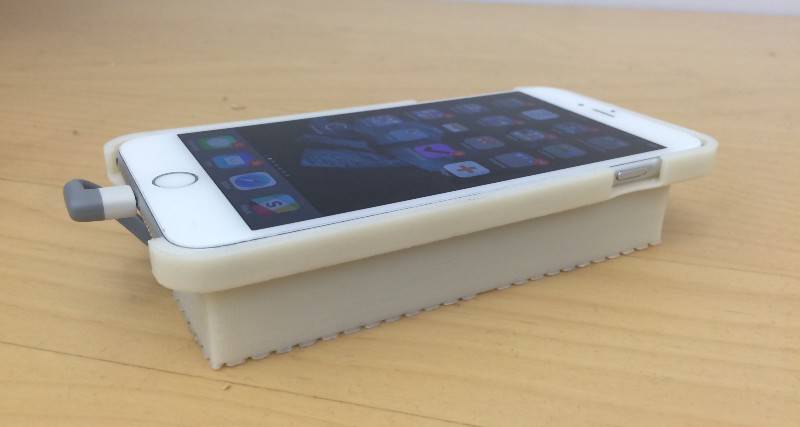 For many Android faithfuls, a secret love of Apple's hardware hides deep in their hearts. Likewise, many iOS devotees are curious about the other side of the fence, or love their phones but have grown to hate the closed-in operating system. The folks at Tendigi, previously responsible for bringing Windows 95 to the Apple Watch, seemed to have suffered from the same conundrum. The difference between them and most smartphone users, of course, is that their people actually decided to make it happen. Nick with Tendigi decided he wanted to run Android 6.0.1 Marshmallow on his iPhone 6S Plus. One time-consuming quest and a few 3D prints later, he came up with something quite incredible that, unfortunately, is not for sale at this time.

The case that Nick designed is actually quite ingenious – it houses, essentially, an entire Android phone, sans screen and speakers, thanks to the use of a special reference board often used by developers. The official reference board of the Android Open Source Project, the LeMaker HiKey boasts a fairly powerful 64-bit processor, built-in connectivity and, perhaps most importantly of all, out-of-the-box compatibility with the Android Open Source Project. This compatibility made it easy for Nick to build AOSP from scratch for the board, along with a special iOS app that takes video input from the board. These work in concert with some handwritten and reverse-engineered APIs to allow the LeMaker HiKey to stream its contents almost seamlessly to the iPhone.

The project uses a mix of the board and the iPhone's hardware to create a killer combination that lets users essentially run Android on their iDevice. Since the speed of the iDevice in question doesn't matter much, so long as it has a Lightning connector and runs a somewhat recent iOS version, it would theoretically be fair game, in the case of an actual product release. Since hooking into Android's SurfaceFlinger service and showing a fast slideshow of screenshots through the iPhone was the quickest, simplest and most high-performing way to get the project to the state it's at, a bit of jankiness is to be expected. While everything is there and, for the most part, runs flawlessly, there are times that the speed ends up leaving a bit to be desired, with user-facing speeds matching 2012 flagships like the Samsung Galaxy S3 and LG Optimus G most of the time. At this time, the project is detailed enough for somebody who's determined to repeat, but Nick is not offering the iPhone case itself or the build of AOSP Android that he used to the public.