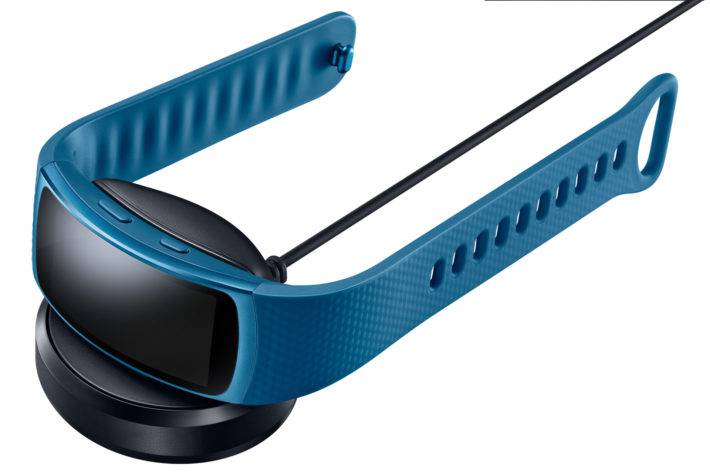 Samsung's follow-up to the original Gear Fit, their first official wearable that wasn't a smartwatch and was aimed at fitness, is now a reality as Samsung has lifted the curtain on the Gear Fit2 at today's event. Back on May 31st, Samsung began to send out surprise invites to the media about an upcoming event to happen on Thursday, June 2nd, and that attendees would be able to experience how their devices work together to create a galaxy of possibility.

The Gear Fit2 will feature an always on GPS sensor and heart rate monitor for tracking continuous heart rate, and it will also be able to track your steps, distance, calories burned and more. It will also feature a clock for displaying the time, and will have limited app compatibility for things like weather through Accuweather. When it comes to tracking activities, the Gear Fit2 features an automatic tracking functionality that picks up information when users are engaged in various activities including when using a rowing machine, running, cycling, or walking. The Gear Fit2 naturally syncs easily with users' S Health data to send information to the app, and Samsung states that this sort of data sync is compatible with other fitness apps too, so if you use Google Fit or another popular offering the Gear Fit2 should send data to the app nice and easy. For those that get motivated by music when they exercise, the Gear Fit2 will also work as a standalone music player allowing you to listen to music without the need to have your phone on you when you're at the gym or out on a run.

Although the Gear Fit2 is just now being made official, much of the Gear Fit2 specifications and features were speculated on by the public as both were leaked within the last couple of weeks. In addition to the Auto Tracking Activity feature and the embedded GPS and Heart Rate Monitor, Samsung has given the Gear Fit2 a slim and sleek, ergonomic design to keep the wearer comfortable, and it's capable of receiving your notifications so you can view and respond to texts and emails as well as social alerts. It also comes equipped with a curved Super AMOLED display with a high resolution color touchscreen, and it will be available in a pink, blue, and black color.

When it comes to official specifications, the Gear Fit2 feature a 1.5-inch curved Super AMOLED display with 216 x 432 resolution, and it's powered by a dual-core 1GHz processor with 512MB of RAM and 4GB of internal storage. It's water and dust resistant thanks to the IP68 certification, comes in small and large sizes, has a 200mAh battery inside to keep it going and it's compatible with Android devices running 4.4 and above. Notification compatibility allows it to receive alerts for emails, calls, texts, applications, and schedules, and the standalone music player supports a wide variety of audio formats including MP3, WMA, WAV, AAC, M4A, AMR and more. The Gear Fit2 launches this month on June 10th for $179, and pre-orders begin tomorrow for those who want to get a jump on this device.