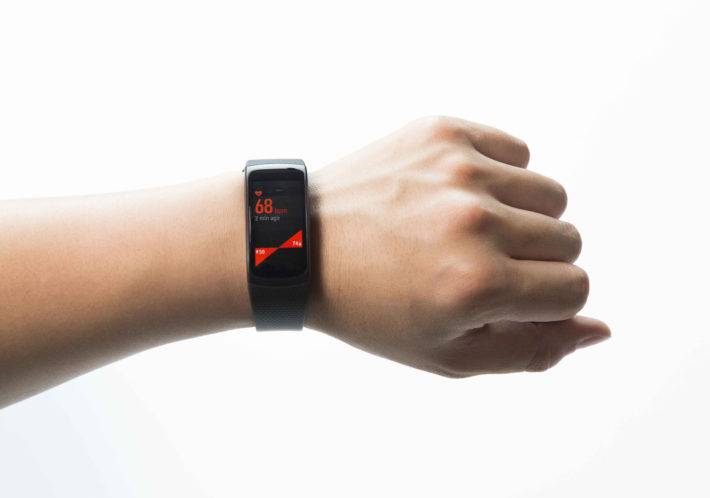 Samsung officially announced the Gear Fit2 as the successor to the original Gear Fit fitness band that was launched back in 2014, and they also announced a new wearable this afternoon called the Gear IconX, which are a set of truly wireless earbuds that can also track your steps and other activities. If you're curious to know the difference between the Gear Fit2 and the original Gear Fit, Samsung has compared both fitness bands side by side in an infographic that breaks down a few specifications comparisons and which features they both have.

When it comes to the hardware and specifications of Samsung's new fitness band, there are a few similarities between it and the old model, but much has also changed that may just make it worth looking at over other trackers including the original Gear Fit. It comes equipped with a Curved Super AMOLED display at 1.5-inches with a resolution of 216 x 432, and it's powered by a 1GHz dual-core processor, although it wasn't listed which processor actually powers the unit. It comes with 512MB of RAM and 4GB of onboard storage which can be used for storing music since the Gear Fit2 also works as a standalone music player. It supports Bluetooth 4.2 for a connection to your mobile device.

Inside the fitness band which measures 24.5 x 51.2 mm, you'll find an accelerometer, a gyro, a barometer, built-in GPS, and a heart rate monitor, and it comes in two sizes, small and large, with the small weighing just 28g while the large weighs slightly more at 30g. The small is listed as fitting those with a wrist size of between 125 and 170 mm, while the large will fit wrist sizes between 155 and 210 mm. It has a 200mAh battery and runs on the latest Tizen OS, and it's compatible with Android devices that are running at least Android 4.4 and above, but the device must have 1.5GB of RAM or more. It can display notifications for texts, calls, emails, apps, schedules, and it comes in black, pink, and blue for the colors. It's also IP68 certified so it can withstand up to 30 minutes in up to 1.5 meters of water, and the standalone music player support a wide range of audio formats including MP3, WMA, WAV, AAC, M4A, AMR, AWB, OGG, OGA, and 3GA. The Gear Fit2 goes up for pre-order tomorrow at $179, and is expected to launch this month on June 10th.