Tablet shipments have been decreasing for quite some time now, and it seems like quite a few analysts think phablet adoption has something to do with this. It is normal to see 6.4-inch devices these days, Xiaomi had introduced the 6.44-inch Mi Max phablet earlier this year, and Lenovo released three 6.4-inch PHAB2 devices quite recently as well. Quite a few companies are still releasing tablets, but not nearly as many as before. Samsung is definitely one of those companies, this Korea-based tech giant tends to release quite a few tablet devices a year, they’ve recently unveiled the Galaxy Tab A 10.1 actually. Well, it seems like Samsung is getting ready to announce yet another tablet, read on.

The Galaxy Tab 4 was originally introduced back in May 2014. This was, based then, one of the more affordable Samsung-branded tablets, and it seems like its successor is on the way. The Galaxy Tab 4 (SM-T230NW) has been listed on Zauba (India’s import – export site) about a month ago, and the device has now received radio certification in South Korea by RRA. The tablet was actually certified yesterday, and it carries the same model number as the one that was listed by Zauba. As many of you know, official certification is one of the last steps a device needs to take before it gets released, and it seems like we might see the Galaxy Tab 4 7.0 (2016) released in the next couple of weeks.

Now, as far as specs go, this tablet is expected to ship a 7-inch display, though we still don’t know if it will come with a 720p or 1080p resolution, though we’re guessing the latter. The device will ship with 1.5GB of RAM, and will be fueled by an octa-core SoC running at 1.7GHz, at least if benchmarks are to be believed. Android 6.0.1 Marshmallow will also be a part of this package, and you’ll be able to find Samsung’s custom UI on top of Google’s OS, of course. All in all, this will be a really affordable device, one of Samsung’s most affordable tablets this year, that’s for sure. We’ll let you know as soon as new info surfaces, stay tuned. 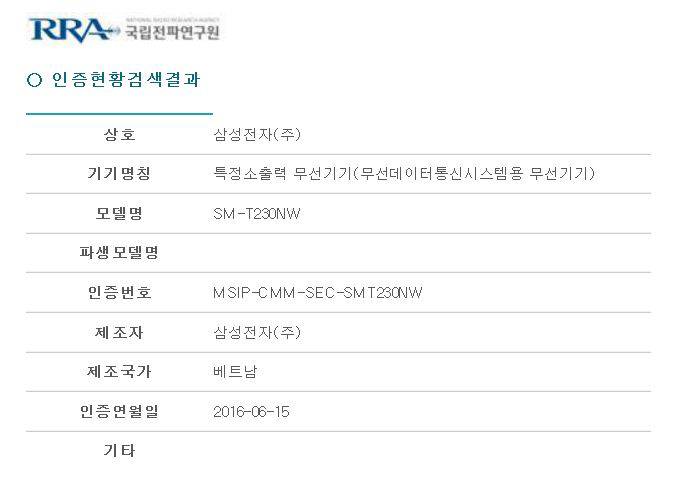