Motorola released the original generation Moto G smartphone in 2013 and showed the world’s Android manufacturers and customers that a low end, inexpensive device did not need to offer a sluggish interface, poor quality, low resolution screen, and be ignored when it came to software updates. The original Moto G offered a near-Nexus software experience, including fast software updates, a 4.6-inch, 720p resolution display, a quad-core processor and a respectable battery. Where it was not so brilliant was in the camera stakes nor did it offer 4G LTE, but the Moto G was a great handset offered at a great price. Motorola followed the Moto G with the even cheaper, but less well specified, Moto E. The original Moto E offered customers a smaller, lower resolution 960 by 540 pixel screen, a dual-core processor rather than the Moto G’s quad-core, a lesser camera but at an even cheaper price.

The original generation Moto E has been followed by newer models, including those with onboard LTE and a more powerful chipset. Motorola, once owned by Google and now sold on to Lenovo, is rumored to be preparing a new generation Moto E device. We have recently seen a few benchmark results going through GFXBench that appear to show such a new device with a model designation is XT1700 and XT1706: low end models in the Motorola portfolio. These handsets sported an entry level, 1.0 GHz, 64-bit, quad-core MediaTek System-on-Chip, 2 GB of RAM and a 5.0-inch, 720p resolution display. They also come with 16 GB of internal storage plus a microSD card slow, an 8-megapixel rear camera and a 5-megapixel front-facing camera. Whilst GFXBench results can be faked, it is tougher to fake Bluetooth certification and today the model XT1700 (a Lenovo branded device) and XT1706 (Motorola branded) have passed their Bluetooth 4.0 certification process, running Android 6.0 Marshmallow.

Lenovo promised that they would not cancel the Moto E and Moto G families and we’ve already seen a newer generation Moto G device being launched. It seems that the new Moto E is in the final stages of preparation and will be launched soon, but unfortunately there is little information on the price or likely market availability. Although, it does stand to reason that further information will be coming through soon enough. 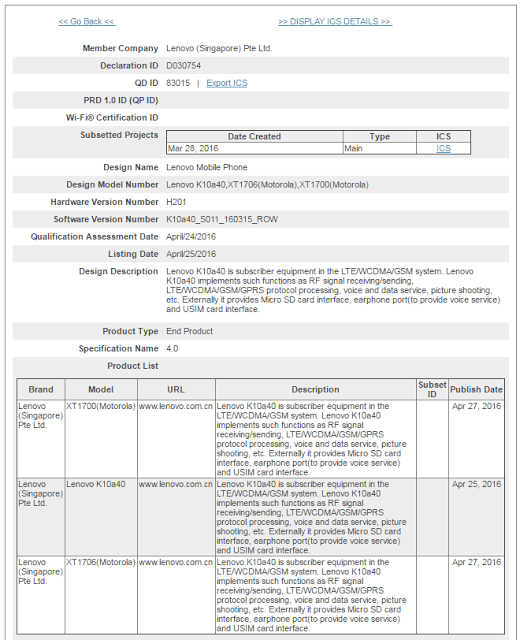