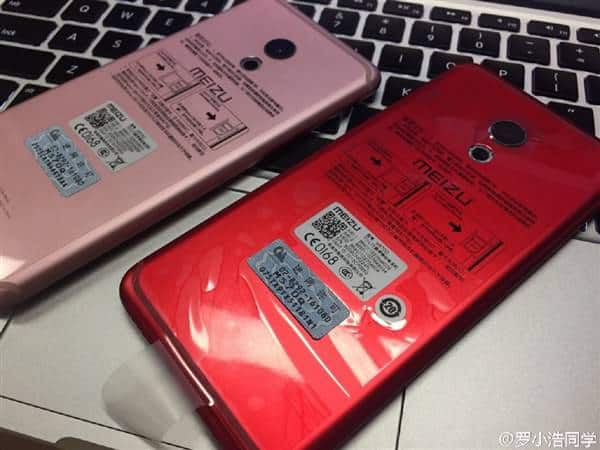 The Meizu PRO 6 was announced back in April, and this China-based company has actually introduced two more devices that month, the Meizu M3 and M3 Note. That being said, the ultra-affordable Meizu M3S landed yesterday, and rumors are saying that Meizu plans to introduce the Meizu MX6 later this month. The Meizu PRO 6 was originally announced in Dark Gray, Silver, Red, Gold and Rose Gold color options, but we still didn't see the Red or Rose Gold variants of this handset, those two variants are still not available. Well, it seems like they might be on their way, read on.

A couple of new images surfaced in China, and they're showcasing the Red and Rose Gold Meizu PRO 6 variants. If you take a look at the gallery down below, you'll get to see these two variants of the device in real life images. We still don't know when will Meizu release these two variants of the Meizu PRO 6, but we do expect them to arrive soon enough. The specifications will be identical to the original Meizu PRO 6, as already mentioned, these two models were announced at launch, but are still not available. Speaking of which, let's take a quick look at Meizu PRO 6 specs, shall we.

The Meizu PRO 6 is Meizu's new flagship smartphone. This device is made out of metal, and it sports rather interesting design, mainly because of the antenna placement, and there's also the 10-LED camera flash on the back of the device that is quite noticeable. The phone is made out of metal, and it comes with a 5.2-inch fullHD (1920 x 1080) AMOLED display. The device comes with 4GB of RAM and 32GB / 64GB of internal storage. This handset is fueled by MediaTek's Helio X25 64-bit deca-core processor, and a 2,560mAh non-removable battery is also included here. The 21-megapixel camera is placed on the back of this phone, and Android 6.0 Marshmallow comes pre-installed with Meizu's Flyme UI on top of it. The 32GB and 64GB variants of this smartphone cost 2,499 Yuan ($386) and 2,799 Yuan ($433) in China, in case you were wondering. We'll let you know once the new color variants become available.