Do we have a good one for you today – the large screened Samsung Galaxy S7 Edge goes up against an even larger screened ASUS ZenFone 3 Ultra. When ASUS named their new line of smartphones, they put the best specs in the Deluxe model – the ‘Ultra’ title refers to the size of its 6.8-inch display…a Full HD display, at that. The outside is beautifully formed Aerospace-grade aluminum alloy with the antenna lines built into the sides of the device – eliminating those lines one the back. Inside, there is plate-full of mediocrity, with mid-level components. The Galaxy S7 Edge is very much the same metal and glass construction from last year’s Galaxy S6, and except for the finger magnet on the back of the device, it is as robust and well-built as a smartphone comes to use these days. The insides are packed with the high-specs. As different as these two devices are, they do have a few things in common. We will then look at each device to try to determine a winner of this specification comparison.

There is no commonality in physical or display size when it comes to the Galaxy S7 Edge and the ASUS ZenFone 3 Ultra. They do not share the same technology or resolution as well. About the closest thing they share on the outside of the device is they both share Gorilla Glass 4 over the display. If we move to the inside of the two devices, they both use a Qualcomm Snapdragon processor, but different models, although they both share 4GB of RAM, and both can expand their internal memory via a microSD card. The camera areas are very different, but when it comes to sound, both have Hi-Res audio. They both have a fingerprint sensor for unlocking the devices – however with no NFC listed on ASUS’ website, there will be no mobile payments with the ZenFone 3 Ultra. Some of the usual suspects are there – WiFi, Bluetooth v4.2, GPS, and a microUSB v2.0 port on the S7 Edge and the newer reversible USB Type-C on the 3 Ultra. Both have large non-removable batteries that have Quick Charge 2.0 on the Samsung and 3.0 on the ASUS.

Samsung did away with the two ‘Edge’ models from last year – the S6 Edge and S6 Edge Plus – and now only offers the larger model, naming it the Galaxy S7 Edge. The central design, based on last year’s metal and glass offering, is as beautiful as ever – with a few refinements outside and significant changes inside.  Let’s take a closer look at the new Galaxy S7 Edge and see how it competes with the new ASUS ZenFone 3 Ultra.

The most prominent, eye-catching feature of the Galaxy S7 Edge has to be the beautiful and sexy 5.5-inch display with its dual-curved edges and QHD Super AMOLED ‘always-on’ display that gives you 577 pixels-per-inch (PPI). The processor found in the Galaxy S7 Edge can be one of two variants – if you live in the US, you will get treated to the newest Snapdragon 820 quad-core processor with dual cores clocked at 1.6GHz and dual cores clocked at 2.15GHz. In other countries, you will get Samsung’s Exynos 8890 octa-core processor with four cores clocked at 1.6GHz and four cores clocked at 2.3GHz. The 820 processor uses an Adreno 530 GPU, and the Exynos 8890 uses the Mali-T880 MP4 GPU – both can handle the toughest graphics you can throw at them. The Galaxy S7 Edge packs 4GB of faster DDR4 RAM, offers 32GB of faster UFS 2.0 memory, and allows room for expansion up to 200GB via a microSD card.

Samsung made a huge change to the primary camera by lowering the megapixels from the previous 16MP shooter and replacing it with a new Dual Pixel 12MP sensor.  Samsung explained that the new sensor and pixels are actually larger than the older 16MP, and this allows it to take in more light and information for the sensor. They didn’t stop there and continued with other improvements by increasing the aperture to f/1.7, included faster phase detection autofocus (PDAF), auto HDR, and retained the OIS.  The Galaxy S7 Edge uses a 5MP wide-angle lens with a larger f/1.7 aperture and Live HDR for its front-facing camera (FFC) allowing for excellent low-light selfies and video chatting. Samsung also went back to a larger 3600mAh non-removable battery and comes with both Quick Charge 2.0 and quick wireless charging.

What features distinguishes the Galaxy S7 Edge from the ASUS ZenFone 3 Ultra? The S7 Edge incorporates a QHD Super AMOLED always-on display to help conserve battery life. It also has dual curved edges that do provide some functionality. The Galaxy S7 Edge has a better processor and GPU and is IP68 certified water and dust resistance. You also have the option of using Samsung Pay to make mobile purchases just about anywhere you can swipe a credit or debit card. The S7 Edge packs a heart rate monitor, oxygen saturation sensor, and quick wireless charging.  The S7 Edge measures 150.9 x 72.6 x 7.7mm, weighs in at 157 grams and is available in Black, White, Gold, and Silver, costing about $790, although many carriers are offering BOGO specials. 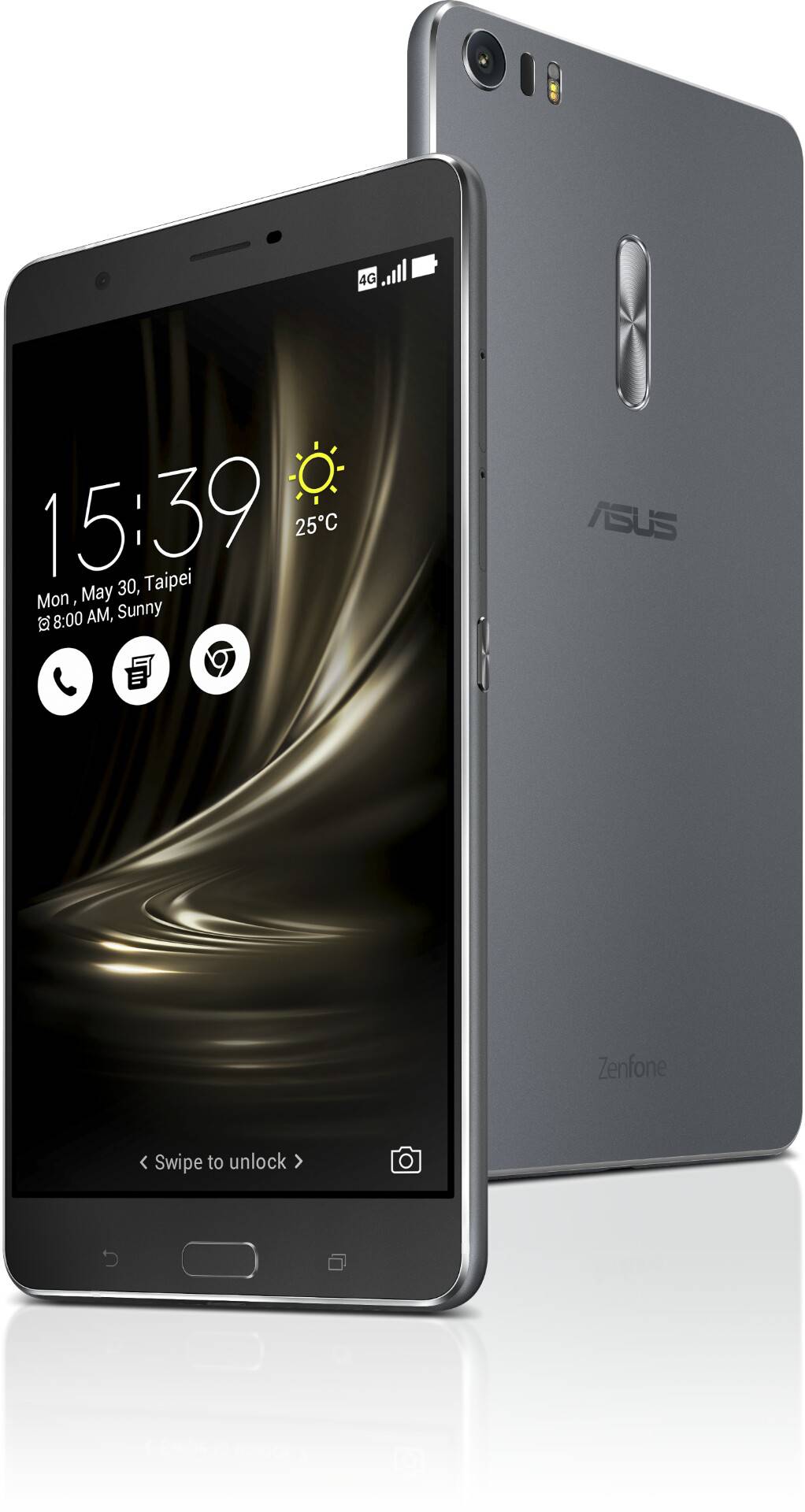 ASUS’ gives us three tiers to look at in their new line of ZenFone 3’s.  They are impressive and well thought out – today we are looking at the ZenFone 3 Ultra. The ‘Deluxe model is the flagship of the three – the ‘Ultra’ name is adopted because of its mammoth 6.8-inch display.  The ZenFone 3 Ultra is a beautiful all-metal design that even hides all of those antenna lines on the back of the phone – they cleverly embedded them in the sides of the device. ASUS changed up just about everything from last year’s ZenFone 2 design – new processor, more RAM, the new UFS 2.0 memory, and better camera. Let’s take a closer look at Ultra model and see how it stacks up against the Samsung Galaxy S7 Edge.

The ZenFone 3 Ultra certainly falls from the phablet area to tablet area with its massive 6.8-inch IPS LCD display with a Full HD resolution of 1920 x 1080 pixels and roughly 324 PPI. The combination of the mere size of the screen and the Full HD resolution result in the lower pixel density. For the brains, ASUS turned to the 64-bit Qualcomm Snapdragon 652 octa-core processor with a quad-core clocked at 1.4GHz and a quad-core clocked at 1.8GHz with an Adreno 510 GPU handling the graphics. It boasts 4GB of slower DDR3 RAM and 64GB of faster UFS 2.0 memory that is expandable to 200GB via a microSD card.

ASUS did some serious work in camera area – the primary camera uses a large 23MP (Sony’s IMX318 sensor) with an f/2.0 aperture, 6-element Largan lens, and 0.03-second TriTech Autofocus – that uses both Laser and Phase Detection Autofocus (PDA) – with a 4-axis OIS for more stability, and a dual-tone flash. The ZenFone 3 Ultra gives you an 8MP FFC with a f/2.0 aperture and 85-degree wide-angle lens for selfies and video chatting. A huge non-removable 4600mAh battery with Quick Charge 3.0 powers the device.

The ASUS ZenFone 3 Ultra has a rear-mounted fingerprint sensor for unlocking the device and dual bottom-mounted stereo speakers. The Ultra arrives running Android 6.0.1 Marshmallow with the newest ZenUI 3.0 running over the top. The Ultra measures 186.4 x 93.9 x 6.8mm and weighs in at 233 grams. It is available in Glacier Silver, Titanium Gray, or Metallic Pink and it will cost you about $479 with 4GB of RAM and 64GB of memory.

Okay, the hands down winner of this specification comparison has to be the Galaxy S7 Edge – it simply outperforms the ZenFone 3 Ultra in every way, shape, and form. Yes, it does have a smaller display – most people do not want to carry around a 6.8-inch smartphone every day – but more importantly, it has a Quad HD resolution and uses the Super AMOLED technology. The S7 Edge packs a much better processor and uses the faster DDR4 RAM. The Adreno 530 GPU is far superior to the 510 GPU on the ZenFone 3 Ultra. The dual-curved display also adds some functionality – not to mention WOW factor. The S7 Edge has an NFC chip that will allow it to make mobile payments – Android Pay and Samsung Pay. While it does have a smaller battery, it also offers quick wireless charging as well as the Quick Charge 2.0. The S7 Edge also offers IP68 certification from dust and water, and for people that use them, there is also a heart rate monitor and oxygen saturation sensor.

The ASUS ZenFone 3 Ultra has a big ass display, but all of the components are mid-range at best – you have a 1080p display, a mid-range processor, GPU and slower RAM.  ASUS did throw in the faster UFS 2.0 memory, a great camera section, and a massive battery, but left out the NFC chip, which means that the fingerprint sensor is relegated to opening the device and no mobile purchases of any sort – fingerprint authorized or not. They did manage to squeeze in an FM radio and dual speakers.

These two devices were made for different market segments and are at a very different pricing level – $480 for the ZenFone 3 Ultra and $790 for the Galaxy S7 Edge. Size wise you get a lot of phone for $480, and if you are interested in a large display without stellar specs, the ZenFone 3 Ultra may be your pick.  However, the Galaxy S7 Edge clearly holds the ‘edge’ in all specifications, but it comes at $310 more dollars. Only you can decide if you want big and cheap or the best of class – it always costs you more.