Do we have a good one for you today – we will compare the OnePlus 2 to the new OnePlus 3.  There will be none of the pricing differentials to worry about between these two devices, which both offer a great value for your hard-earned dollars.  OnePlus may not be a household name when it comes to smartphones, but they are famous for giving the buyer a quality built product that looks premium and as solid as you can get – especially with the all-metal design of the OnePlus 3.  OnePlus has played some strange card hands in the past with a ‘lottery’ style purchase system, keeping the Full HD display, adding NFC, but no fingerprint sensor, and then adding a fingerprint sensor, but no NFC.  However, with the OnePlus 3, we finally have both, the fingerprint sensor and NFC on one device and, hopefully, they are here to stay. First, let’s look at what these two devices have in common and then we will look at each individual device to go into more detail.

OnePlus is still a very small company when compared to Samsung or LG, so when OnePlus comes out with a new model, there are never any drastic changes in the looks department. Both the OnePlus 2 and OnePlus 3 are almost identical in size, although the OnePlus 3 is 18 grams lighter – which may be from the smaller battery.  Both devices still us a 5.5-inch Full HD display, however, for the OnePlus 3, OnePlus shed the LCD technology for an AMOLED display.  Both are running a Snapdragon processor, but very different models.  They both pack 64GB of storage (UFS 2.0 in the OnePlus 3) and no expansion is available.  They have the usual suspects – WiFi, Bluetooth (v4.1 on the OnePlus 2 and v4.2 on the OnePlus 3), GPS, a Type-C v2.0 reversible connector for charging and data transfer.  They both have a fingerprint sensor and a non-removable battery.

Like I said earlier, when you purchase a OnePlus device, you can rest assured that you will receive a quality built smartphone at a reasonable price.  The OnePlus 2 with its solid metal frame and trim reinforces that commitment to quality and value – a “Flagship Killer,” it is not and they obviously had to cut some corners to get their low price.  Picking and choosing those features to keep, and what to discard, is very important. OnePlus kept the same FHD display and the same fingerprint sensor that they used last year but then removed the NFC capabilities – and in doing so removed all possibilities of mobile purchasing.  They did add an extra 1GB of RAM, a fingerprint sensor and increased the battery size from 3100 mAh to 3300 mAh, but offer no rapid charge feature.

The OnePlus 2 sports a 5.5-inch LTPS LCD FHD display with a resolution of 1920 x 1080 pixels and 401 pixels-per-inch (PPI).  OnePlus chose to use the controversial Qualcomm 64-bit Snapdragon 810 octa-core processor and to keep it cooler they slightly underclocked it to 1.56 GHz and 1.82 GHz.  The OnePlus 2 is currently only sold with 4GB of DDR4 RAM and 64GB of non-expandable storage – many times, they announce more than one model, but realized the 4GB/64GB is the only one that makes sense, especially with no means to expand memory.

OnePlus improved the camera area this model by including an improved 13MP sensor from the OnePlus One, adding larger pixels, laser autofocus, a dual-tone LED flash, an f/2.0 aperture and OIS.  For the front-facing camera (FFC,) the OnePlus 2 uses a 5MP sensor with an aperture of f/2.4.  The OnePlus 2 increased the non-removable battery size from 3000mAh to 3300mAh – however, the OnePlus 2 offers no quick charge or wireless charging features.

Notes on the OnePlus 2 – Because there is no NFC on the OnePlus 2, the fingerprint sensor can unlock the phone, but nothing else – there will be no Android Pay or mobile purchases.  It runs OnePlus’ own OS called OxygenOS over stock Android Lollipop 5.1, although a new version of OxygenOS 3.0 and Marshmallow are coming soon.  LTE bands will work on AT&T and T-Mobile networks with the OnePlus 2 and will cost you about $299 for the 64GB model thanks to a discount since the OnePlus 3 is coming out.  There are optional backings you can choose from to customize the look of your device – Kevlar, Black Apricot, Bamboo, and Rosewood. 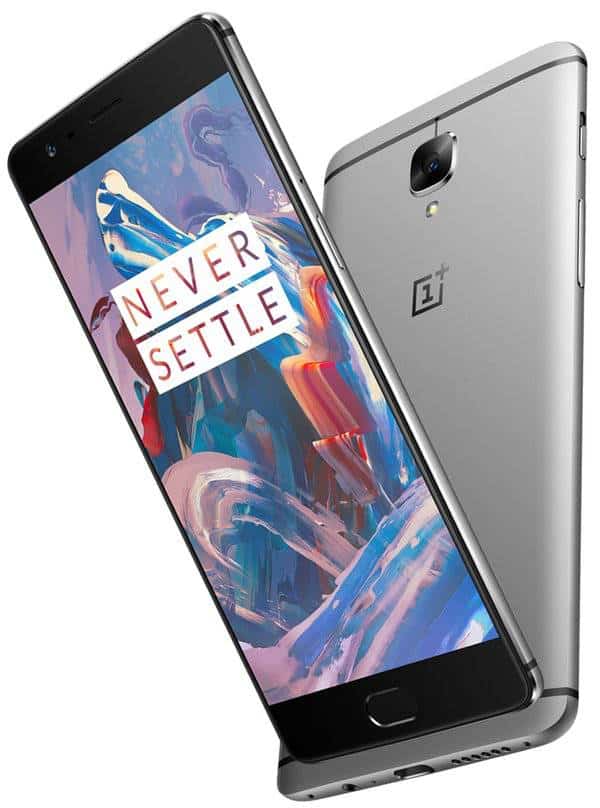 A OnePlus device is not for the person that buys a new phone every year because they want the best spec’d device that money can buy – you know, the one with all of the ‘bells and whistles.’  OnePlus has always built a quality product, but they never have the top-of-the-line of everything in one smartphone – they kind of shoot for the middle, leave a few obvious things off, but charge a great price so no one complains.  The OnePlus 3 is their closest model yet to hitting the bullseye – the only real misses are the Quad HD display and the ability to expand internal memory.  This new all-metal design is very similar to the rest of the OnePlus lineup – a minimalistic look, but one that screams all business.

The OnePlus 3 sports a new 5.5-inch FHD Optic AMOLED display with a resolution of 1920 x 1080 pixels and roughly 401 PPI – the same as the OnePlus 2, except for the AMOLED display, which should offer much better color contrasts.  The newest Snapdragon 820 quad-core processor clocked at 1.6GHz and 2.15GHz provide the brains. They are paired with 6GB of DDR4 RAM and 64GB of the faster UFS 2.0 internal storage with no means to expand.  An Adreno 530 GPU handles any graphics you can throw at it – games, virtual reality, videos, or movies.

The camera area has seen a massive improvement over the OnePlus 2 – there is a new 16MP shooter, with quick PDAF (Phase Detection Autofocus), LED Flash, a larger f/2.0 aperture, and both OIS and EIS.  The FFC camera has increased from 5MP to 8MP with a f/2.0 aperture for better selfies and video chatting.  From pictures posted by Pete Lau himself, as well as many others, they look very good.  OnePlus did one of their “why did you do that” things when they lowered the battery from 3300mAh to 3000mAh in the OnePlus 3, but included rapid charging they call Dash Charge for up to a 60-percent charge in only 30 minutes.

Notes on the OnePlus 3 – We applaud OnePlus for having BOTH the fingerprint sensor and NFC on the same device – opening the way for Android Pay and mobile purchases and authorizing them with a swipe of your finger.  It runs OnePlus’ own OS called OxygenOS over stock Android 6.0.1 Marshmallow out-of-the-box. It measures 152.7 x 74.7 x 7.35mm, weighs in at 158 grams, and will cost you about $399 USD for the 6GB/64GB model. It will come in Graphite, with Soft Gold arriving later. It will start selling in the US and Europe on June 14th and India and China on June 15th. 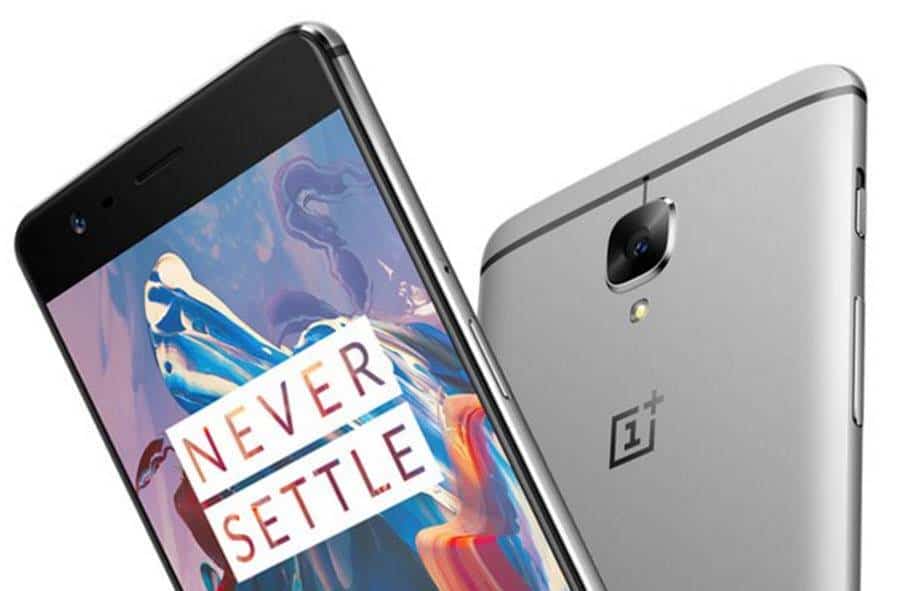 How could I not pick the new OnePlus 3 as the winner of this comparison – for only $70 more, you get much better specifications.  A new metal shell for starters, an AMOLED display, a much better processor and GPU, a great new camera area, and NFC with Marshmallow to make mobile payments a reality.

Is the OnePlus 3 perfect – certainly not, but if you can overlook the FHD display and smaller battery, you have a great device at a fantastic price. Some may not want it due to its lack of LTE coverage on Verizon or Sprint – however, if you are already happy on AT&T or T-Mobile, then the OnePlus 3 may be just the device for you.

The OnePlus 3 upgrades the right stuff, and could have gone a little further – having a QHD display, including a microSD card slot, adding more LTE bands, and raising the price another $30 would make the OnePlus 3 just about the ‘perfect’ smartphone.