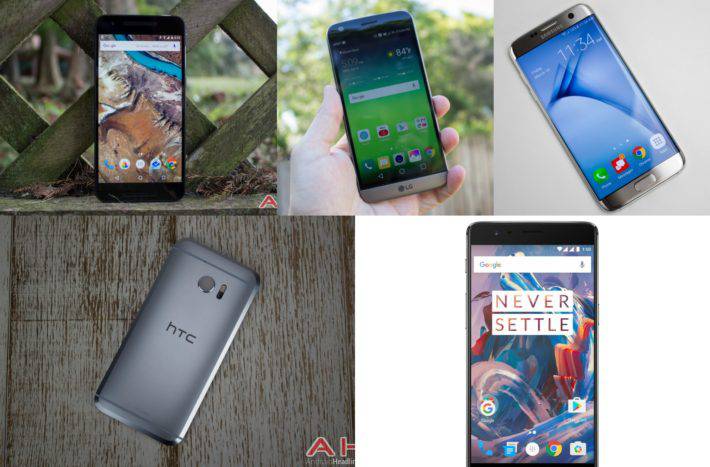 Do we have a good one for you today – We will be looking at five devices – the Nexus 6P, LG G5, Galaxy S7 Edge, HTC 10, and the new OnePlus 3 announced today!  We will look how each of these devices stack up to one another – although we will pay extra attention to the new OnePlus 3.  Will the new OnePlus 3 finally earn the title of “Flagship Killer” that was bestowed on the OnePlus 2?  The OnePlus 2 never quite lived up to those accolades. This will be an interesting comparison – the other four models have been around for a while, so we know a lot about them.  But the new OnePlus 3 is the new kid on the block and we are anxious to compare specs with the more expensive flagships.

OnePlus is a small company that has a band of loyal followers, even though their smartphones have never held any flagship distinction – oh, they offer a great build quality at a terrific price, but in selling them so cheaply, corners have to be cut.  It is the simple law of economics – well, maybe not exactly, but you know what I mean. OnePlus may always use a Full HD display and may never offer expanded memory, but that is okay if they want to keep the price down and sell to a limited number of consumers. However, there is no doubt in my mind if OnePlus slapped in a QHD, memory expansion, added more LTE bands for the US, and slapped a $479 price on the device it would sell like hotcakes.  But, until OnePlus does that, the OnePlus 3 is the closest thing they have designed to a mainstream flagship smartphone.  How does it compete with the other high-end models being offered today? Let’s take a look at the OnePlus 3 and see just how it stacks up to the other devices – the Nexus 6P, LG G5, the Samsung Galaxy S7 Edge, and the HTC 10.

The new OnePlus 3 comes with a new all aluminum body with subtle bezels – in other words, it looks like some other phones on the market – Huawei, Honor, Meizu, as well as an iPhone. As with prior OnePlus devices, it has a solid build quality and premium look and feel.  The Huawei Nexus 6P is another all-metal designed smartphone with a solid build and premium look – falling right in line with the OnePlus 3, although the Nexus 6P does have a quite a camera bulge on its the upper back. The LG G5 also took the all-metal route, but LG gave it a coating to hide the antenna lines that takes away from its metal feel. The LG G5 took a bold step with a modular design – the bottom edge of the phone can be removed so that the user can slide in a new battery or modules to enhance the user experience.  The Samsung Galaxy S7 Edge is a refinement of last year’s new solid metal frame and glass front and back. It was a well-received design (except for the fingerprints) that adds a premium look from any angle – especially with its dual curved display.  The HTC 10 is the most complete smartphone that HTC has sent to market – it retains its all- metal design, but it is a new and bold, chamfered look. HTC then added all of the right ingredients to make this a great flagship device.

Years ago, nobody took cellphone cameras very seriously – now they are one of the top things we look for on a smartphone. It seems that OnePlus took this seriously enough in the OnePlus 3 and put in some impressive specifications. They are using a Sony IMX298 16MP sensor with a quick Phase Detection Autofocus (PDAF), LED Flash, OIS and even EIS (Electronic Image Stabilization), with an aperture of f/2.0 to get some great photos. OnePlus even added a Sony IMX179 8MP sensor for the front-facing camera (FFC), with a large 1.4 µm pixel size, f/2.0, and EIS for selfies and video chatting.

The HTC 10 finally got its camera are in check after years of experimenting – a 12MP HTC UltraPixel 2 sensor with laser autofocus, dual-tone LED flash, a f/1.8 aperture, and OIS. A 5MP FFC with an f/1.8, 23mm, autofocus, HDR, and OIS should allow for some great selfies and video chatting.

The LG G5 measures 149.4 x 73.9 x 7.7mm and weighs in at 159 grams. Its LCD features the always-on display that saves on battery life and allows the user to glance quickly at the time, date and notifications. The LG G5’s uniqueness is its ability to use modules that add versatility to the device – extra battery life, a physical camera grip and controls, a B&O sound module, with more promised to come. This is a great idea, but outside manufacturers must design and build modules – so you have to ask yourself how expensive will they be and can you use them on the next LG G6, for instance. It could end up being a marketing nightmare for LG.

The HTC 10 measures 145.9 x 71.9 x 9.0mm and weighs in at 161 grams. It features a new BoomSound Hi-Fi sound with one ‘woofer’ speaker at the bottom of the device and a ‘midrange/tweeter at the top front of the device. It now sports a physical home button that doubles as the fingerprint sensor. The HTC 10 is priced at about $650 and available at Sprint, Verizon, and T-Mobile stores.

All of the devices here are running Android 6.0.1 Marshmallow and all, except the Nexus 6P, are running an overlay of their own User Interface (UI.)  The OnePlus 3 will use their latest OxygenOS, LG G5 uses LG’s Optimus UX 5.0 UI, the Samsung Galaxy S7 Edge runs TouchWiz UI, and the HTC 10 will run their Sense UI. All devices, including the OnePlus 3, are available for sale as of today.  All models, except the S7 Edge, are using the new Type-C reversible port for battery charging and data transfer, whereas the Samsung models use the older style v2.0 microUSB.  All five devices offer a fingerprint sensor that will unlock the device and will allow you to authorize mobile payments via Android Pay – the S7 Edge also offers the more flexible Samsung Pay as well.  All of the devices except the OnePlus 3 and Nexus 6P offer memory expansion via a microSD. All models have the usual suspects – WiFi, Bluetooth, GPS and NFC capabilities.