The Nubia Z11 will be announced on June 28th, the company confirmed that a while back. The company’s GM, Ni Fei, confirmed quite recently that the device will sport a ‘bezel-less’ display, and has also shown off its front panel via Weibo (Chinese social network). The Nubia Z11 has already been certified by TENAA (China’s equivalent to the FCC), and will follow the lead of the Nubia Z11 Mini and Z11 Max which were introduced earlier this year.

That being said, the Nubia Z11 (NX531J) has surfaced once again, this time around the phone has appeared on AnTuTu. This listing more or less confirms everything we’ve seen thus far, the device will ship with a fullHD (1920 x 1080) display, and will pack in 4GB of RAM and 64GB of native storage. Qualcomm’s Snapdragon 820 64-bit quad-core processor will fuel this smartphone, and an Adreno 530 GPU is in charge of graphics rendering. The 16-megapixel camera will be available on the back of this device, and an 8-megapixel shooter will be placed up front. AnTuTu says that Android 6.0 Marshmallow will come pre-installed on the Nubia Z11, and on top of it, you’ll get the company’s Nubia UI.

Now, in addition to what AnTuTu revealed, we know that this smartphone will be made out of metal, and that it will resemble the Nubia Z11 Mini and Z11 Max. The fingerprint scanner will be placed on the back of this phone, and chances are we’ll get two SIM card slots along with this device. The Nubia Z11 will be the most powerful smartphone Nubia has ever announced, and it is possible that the company will opt to release the 6GB RAM variant of this device as well, though we’re only guessing at this point. We still don’t know how much will this phone cost, but if the Nubia Z9 is any indication, it sure won’t be all that cheap. That is more or less everything we know about the Nubia Z11 thus far, you can check out some images from TENAA in the gallery down below if you’re interested, while we wait for the company to unveil their new device. 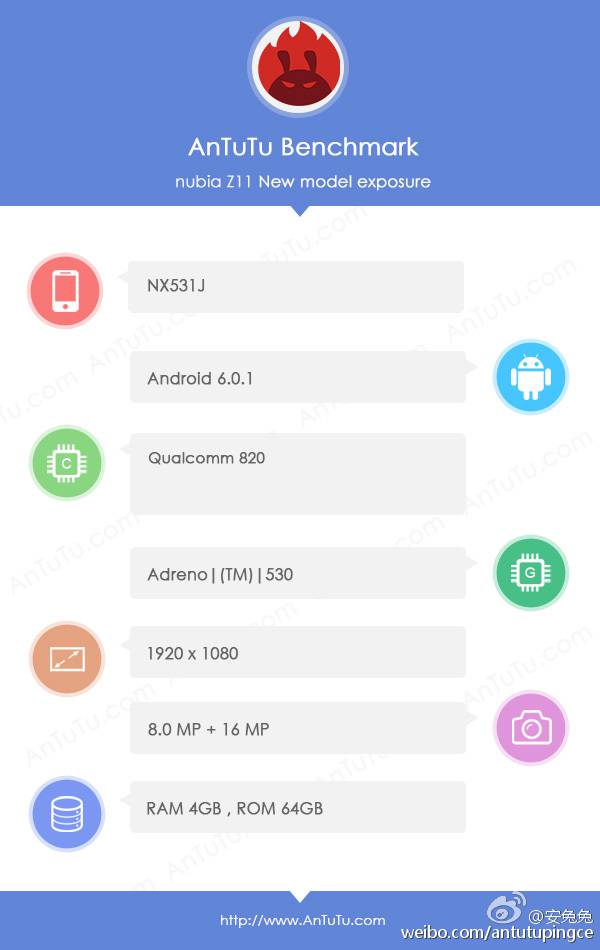