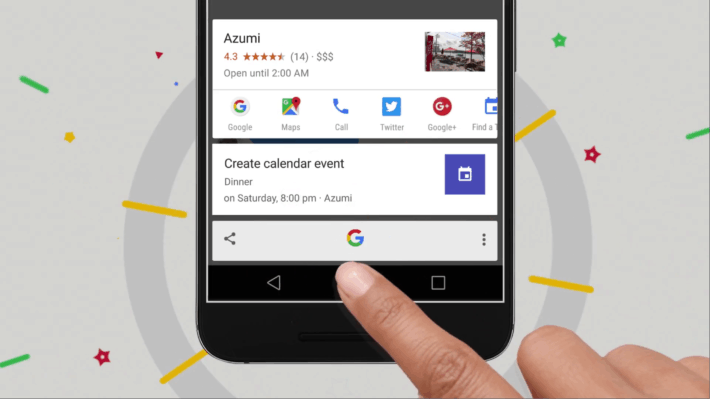 When Android 6.0 Marshmallow launched in a Developer Preview similar to Android 5.0 Lollipop as well as the current Android N Preview, one of the more talked about features was Now on Tap. An extension of Google Now, Now on Tap bought Google's fancy new search technology to the rest of Android, allowing users to perform a quick search to get quick answers no matter which app or website they were using. The problem with Now on Tap however – for some – is that it needed Google Now Cards to be turned on as well. This meant that for those that wanted Now on Tap, they had to take all of Google Now with it, which hasn't exactly impressed everyone. Now however, this appears to have changed.

Enterprising Reddit members have discovered that they are now able to turn on Now on Tap in the Google settings, without having to have Google Now Cards turned on as well. This means that users can now perform quick searches that bring up links as well as answers from the Knowledge Graph, just like Google Now does, without having to accept all of Google Now. This will be a welcome change to some users that turn off Google Now for privacy reasons, to save a little battery life or just simply because they don't make the most of it. While it might seem strange to turn off parts of Android such as Google Now, that's perhaps the point of Android; being able to make it your own. The main reason people would turn Google Now off, or disable the cards at least, is down to location data. To be at its best, Google Now needs to figure out where you are a lot of the time, and that uses the GPS on your device, which can in turn gulp away at your battery.

It appears as though this change has happened server-side, which means that there's no need to have a new version of the Google app, as long as it's a fairly recent one. Reddit users running both Marshmallow as well as the Android N Developer Preview have noticed this change, and while it's only a small change, it'll certainly be a welcome one for most.