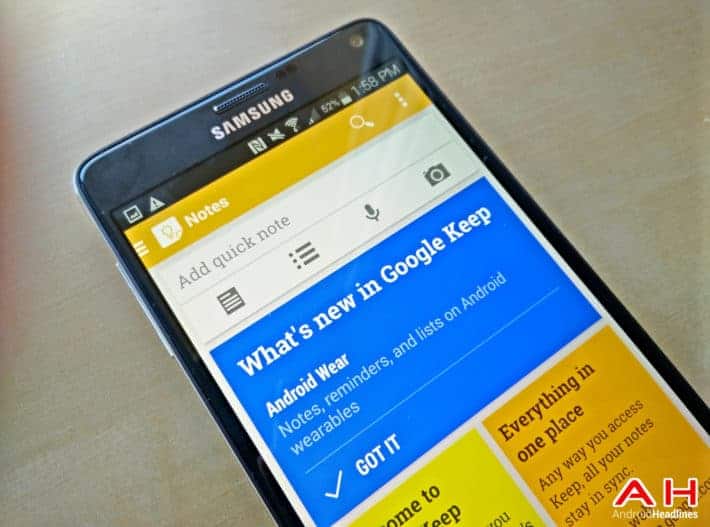 When it comes to note taking apps on Android, there are tons of good options out there, including big names like Evernote and OneNote. Google however, for the last few years now has been offering their own note taking solution, complete with Android app, dubbed Google Keep. Designed to be more simple in its approach than say Evernote, Keep has found a following of users that are looking to make sure they keep track of everything they need to without having to jump through any hoops or anything like that. Now, thanks to some snooping in the APK from Android Police, it looks as though the next update of Google Keep could be introducing a new feature.

According to the strings found with the code dug up by Android Police, pinning of notes looks all but confirmed to be coming to Google Keep. Just like a pinned tab in the Desktop version of Chrome, pinning notes in Keep is probably going to make it easier to ensure that your most important notes at the moment stay on top of everything else. The best example of this is perhaps how a pinned Tweet works on Twitter, pinning it keeps it above all others, no matter how old said Tweet is. While there are methods of organizing notes in Keep already, using labels and other priority options, it's not the best system to do that with. The pinned method will probably make a lot more sense to users of Keep as well, especially given the way that notes in Google Keep look similar to Sticky Notes.

Right now, the new version of Google Keep that should be available to most users doesn't have this new feature, but should be available in upcoming versions of the app. Google has a long habit of laying the groundwork of new features in versions that come before it, and it's been quite some time since Google Keep got much of an update. With Android N launching in the Fall as well as new apps, Allo and Duo, launching later this Summer it's not too surprising that Google wants to bring some new features to an older app of theirs.