OPPO is currently one of the largest China-based smartphone manufacturing companies, at least as far as smartphone sales go. This company has managed to sell 50 million smartphones last year, which means they’re still inferior to Xiaomi and Huawei in China, but are getting there. The company has introduced their Oppo R9 and R9 Plus devices earlier this year, both of which are expected to sell really well throughout the year, and the company has also unveiled the OPPO F1 Plus FC Barcelona Edition, which is a limited edition Barcelona-themed smartphone.

That being said, OPPO has opted to unveil yet another device, and this time around we’re looking at a mid-range device. The OPPO A59 is the company’s newest phone, and it is made out of metal, just like the OPPO R9 and R9 Plus. This phone features a 5.5-inch 720p (1280 x 720) 2.5D curved glass IPS display, 3GB of RAM and 32GB of expandable internal storage. The device is fueled by MediaTek’s MT6750 64-bit octa-core processor, along with Mali T860 GPU for graphics. Android 5.1 Lollipop comes pre-installed on this phone along with OPPO’s ColorOS 3.0 UI, which we’re used to seeing on the company’s devices. Now, as far as imaging goes, the 13-megapixel shooter (f/2.2 aperture, 1.2um pixel size, PDAF) is placed on the back of this device, and an 8-megapixel camera (f/2.0 aperture, 1.4um pixel size) can be found up front. This handset comes with 4G LTE (with VoLTE), and Bluetooth 4.1 is also a part of the package. The 3,075mAH battery is also included here, and it is not removable. OPPO says you can get 14 hours of battery with this device, on ‘normal’ usage. The fingerprint scanner is placed below the display, it is embedded in the physical home key that is placed there.

The OPPO A59 is a mid-range smartphone, as already mentioned, and as such, it costs 1,799 Yuan ($275) in China. This device can be pre-ordered directly from OPPO already, and it will be available for purchase in the country starting on June 18th. The device is available in Gold and Rose Gold color options at the moment, we don’t know if OPPO plans to release it in any other color options. 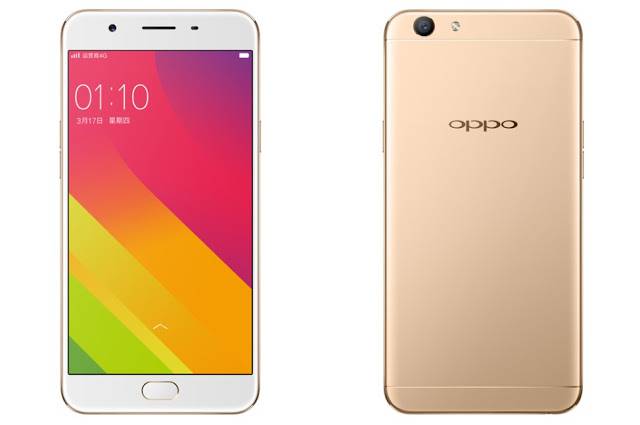