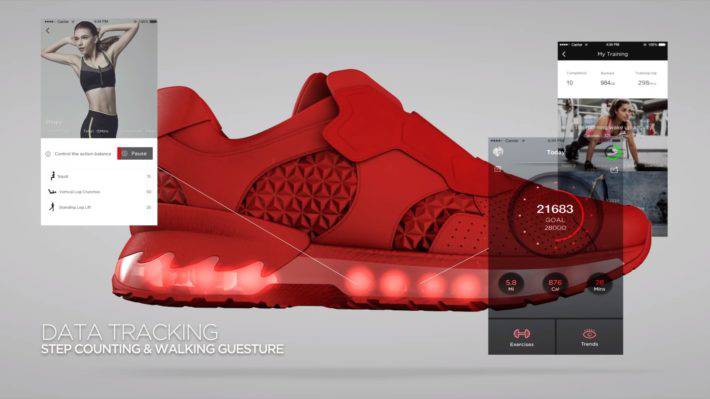 Lenovo has created a new controller for mobile gaming that will allow you to use your body to play. Specifically, you can use your feet to control mobile games. In a demo, an infinite runner game where participants used their feet to move left and right, jump and perform other such in-game actions was shown off, and other applications such as dance games, VR and AR, along with competitive sports games are definitely possible in the future. The controller is stylish, looking much like a regular running shoe, but beefed up with Lenovo's technical touches. That, of course, is because that's exactly what it is.

The smart shoe on offer, on top of being usable as a game controller for certain applications, boasts just about all of the features of a standard fitness tracker, aside from heart rate measurement, and can even record the data and allow you to compare data sets. A 3D scanner in the insole checks over your foot in detail to monitor your health, though exactly what data it yields and how it would be used was not announced. Such a scanner could easily track things like weight, body fat percentage, amount of sweat during a workout, and so on, as well as analyzing your gait to ensure you're walking, running and gaming the best you can. The shoe also features smart lighting along the bottom that can be controlled by movement, represent given data or interact with music to give your midnight run a fun light show. The whole thing is powered by an Intel chip for wearable applications, code named Curie, and is the product of a year-long partnership with Vibram, an outsole manufacturer. Wireless charging is, of course, also on board, being favorable over a port that could introduce damage from water or foreign objects in such a device.

The announcement for the shoes did not go into detail on things like materials, how it would pair to a phone or if it would need to at all, price, or release date. The model shown off at Tech World was actually just a prototype, meaning it may not be the same as the model that hits store shelves eventually, should Lenovo choose to move forward with commercialization of the niche product.