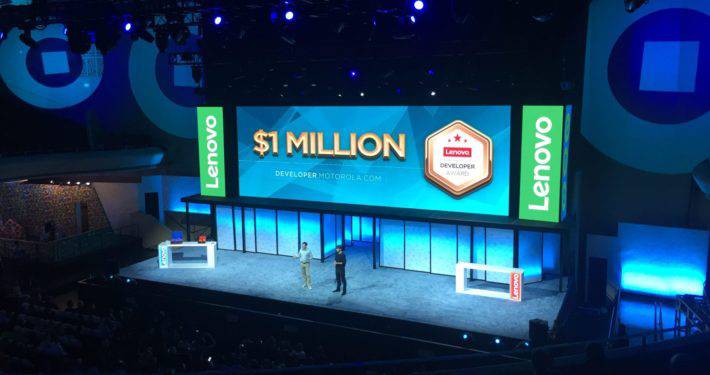 It's not too uncommon to hear about people who have I.T. chops getting a decent extra payday on top of their day job, like security researchers and white hat hackers seeing cash from Google after finding vulnerabilities in their programs. When it comes to development, best app contests and awards abound, but what about awards for the best hardware? Often left to industry analysts, developers of things like specialized accessories and the phones themselves often get little extra benefit beyond the paycheck for putting in the hours where they work and the credit for designing the device. Lenovo is intent on changing that tune, however.

At their Tech World conference on Thursday, they announced a new initiative that will see top developers of Moto Mods rewarded quite handsomely. With the Moto Mods boasting compatibility with future models of the Moto Z family, it's no stretch to call the Moto Mod world a nascent platform, and as with anything of that sort, something has to spur developer interest before it can really take off. Aside from the vastly wealthy, the prospect of a cool $1 million is enough to get just about anybody excited, and that's exactly what the Moto Mod development scene is looking at. Lenovo is putting $1 million worth of prizes up for grabs for top developers, though details were a bit sparse on exactly how the whole thing could work.

There is always the possibility of a good old fashioned cash prize, but in the tech world, rewards like computers, phones and specialized hardware, as well as software credits, are just as likely. Additionally, it seems to be implied that the $1 million will be spread across multiple developers, eliminating the possibility of Lenovo simply handing over $1 million in cold, hard cash to the maker of the best Moto Mod. Still, the prize pool is pretty substantial and should get the Moto Mod development scene moving in short order. Thus far, no prize structure, contest dates or submission deadlines of any sort have been announced, though it's likely pretty safe to assume that they'll want to get the contest at least underway before the Moto Z family sees their worldwide release in September.