Having endured declining sales and falling revenues over the past several quarters, the senior management at HTC would have been hoping that the company’s latest flagship smartphone, the HTC 10, and the much talked-about VR headset, the HTC Vive, would be able to pull the company out of the financial abyss it had sunk into over the past couple of years. However, developments over the past month have now seemingly dealt a severe blow to the company’s hopes of an effective recovery any time soon. The latest financial disclosure by the Taiwanese tech company has now revealed that it actually earned less revenues during May, 2016 than it did during the same month last year, when it was already struggling big time with the complete lack of traction for its One M9 flagship.

HTC announced consolidated revenues of NT$6.75 billion ($209 million) for last month, but what should really worry the powers-that-be at HTC is that the figure actually represents a YoY decline of a whopping 37.4%, which is not something company officials would have been bargaining for. Those looking for a ray of hope in the dismal set of numbers can, however, take solace from the fact that the month-on-month figure does look a bit better, with a 17.4% increase over the company’s reported consolidated revenues of NT$5.7 billion ($176 million) during April, 2016. However, the year-to-date figures again look disconcerting, with a 58% decline in consolidated revenues during the first five months of this year, as compared to the corresponding period last year.

Meanwhile, even as the company’s latest offerings are apparently not proving to be enough to rake in the big bucks, the release-date for its first-generation smartwatch – codenamed ‘Halfbeak’ – is still in limbo. The device was earlier expected to be unveiled this month, but the latest reports suggest that the ETA has now apparently been pushed back until the fall. So if there’s even an iota of truth in those reports, it means that HTC cannot expect any support coming from that front either over the next few months, so it will be really interesting to see how the company is able to overcome its myriad of issues going forward. 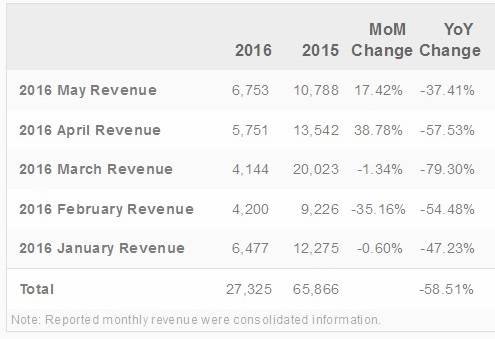