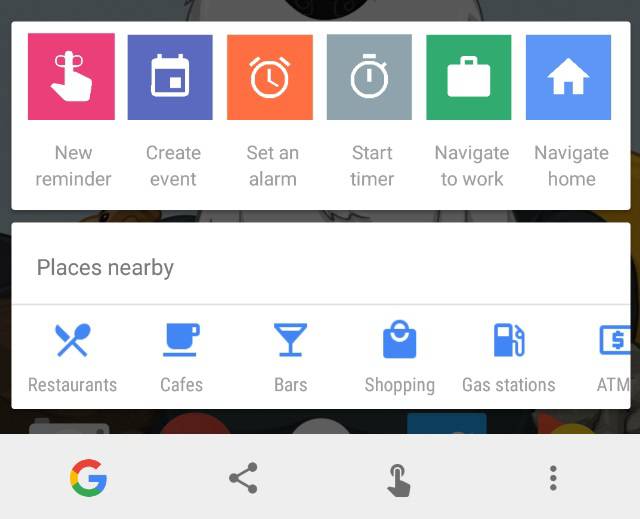 Google’s Now on Tap is one of those features which you either love or hate at the moment. While some find it useful, others find it to be a bit of a disappointment compared to what the feature was originally touted as. Whichever side of the fence you are on with Now on Tap, the one clear aspect is that Google is certainly trying to increase its usefulness and has been introducing a number of new features, as well as testing others. In fact, it seems as though there is a new Now on Tap feature currently being tested now.

As you can see from the image, the main aspect of this new feature is that it now includes two specific rows. Each row contains a number of links which are generally speaking, just shortcuts. However, the two rows do differ in their function. The first row seems to be a very specific shortcut selection for tasks that you might want to use Google Now for. So for instance, setting a reminder or an alarm, creating an event and so on. In contrast, the second (or lower) row looks to provide shortcuts to nearby places. With the options broken down into specific categories like restaurants, bars, gas stations and so on. Presumably, offering device owners a one touch click option to view details on nearby places. Whether this is through Maps or just through Search results though, currently remains unknown.

In general, details on this new feature are largely non-existent as Google has yet to announce the feature. Likewise, the testing of the feature seems to be fairly random and is currently thought to be an A/B tested feature. So there is no practical way to activate the new rows by the end-user. If you are part of the testing group, then activating Google Now on Tap will show the two new rows. Likewise, if you are not, then you will not see them when starting up Now on Tap. Although, as this is Now on Tab, you will of course have to be running Android 6.0 (Marshmallow) in either case.