Skip to content
Advertisement
Trusted By Millions
Independent, Expert Android News You Can Trust, Since 2010
Publishing More Android Than Anyone Else
1
Today
43
This Week
226
This Month
2895
This Year
112958
All Time
Advertisement Even though the final stable release of Android N is believed to be just months away, most Android OEMs aren’t yet done rolling out Android Marshmallow to their existing smartphones and tablets. Although most major manufacturers have already updated their premium flagship smartphones to Android 6.0, tablets, unfortunately haven’t seen the same amount of love for one reason or another. However, Samsung Electronics is one manufacturer that has started to roll out Marshmallow to its tablets over the past month or so, now that it’s done with the Marshmallow updates for its premium handsets from the past couple of years. Some of the Samsung smartphones to have received Android Marshmallow are the Galaxy Note 5, Galaxy Note 4 and the entire Galaxy S6 lineup from last year.

With all that out of the way, the South Korean consumer electronics company rolled out Android Marshmallow to the Galaxy Tab A 9.7 last month, and now it’s time for the Galaxy Tab A 8.0 to receive the same treatment in Australia. According to reports from Down Under, the mid-range device has started receiving an all-new update earlier today that weighs in at 1.1 GB and comes with a number of bug fixes, stability improvements and speed optimizations. However, the most important and exciting part of the changelog is the part that says the latest incoming update will install Android 6.0 Marshmallow on the device.

While Samsung hasn’t always been the quickest off the blocks in rolling out software updates to its smartphones and tablets, the latest move from the company is certainly a welcome move for users of the said device. As for the changelog, it isn’t immediately clear if Samsung has officially published one on the web, but the latest update is expected to bring native Marshmallow features to the device. Those include a battery-saving feature called ‘Doze’, an all-new app drawer and a revamped app permissions manager for more granular control over app permissions. On top of that, Samsung is expected to have added its own tweaks and enhancements to its TouchWiz UI, which is said to have gotten lighter, less bloated and more user-friendly in its latest iteration. 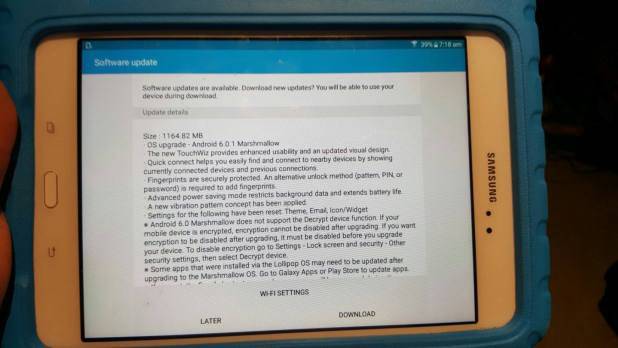