When it comes to services from Google there are those that everyone uses, sometimes without even realizing they’re from Google. Many of these include Google Maps, Gmail and of course the Play Store, but there’s one product from Google that people have become very fond over the years and that’s Google Drive, the collective service for Google Docs, Sheets and Slides. Each of these separate services have their own Android app available, and Docs and Sheets have been recently updated with a new feature or two for each. These features make it easier to make adjustments on the move and in the case of Google Docs, make a last minute change before you print something.

Starting with Google Docs, the new version has been updated with the ability to edit a document inside of the print layout view. This seems a fairly trivial feature for Google to offer, but considering that they expect users to print documents from their devices no matter where they are, it’s good to see this being added. All users will need to do is tap the pencil, access the print layout view, and then make any changes they want to the 100% final product. Meanwhile, Google Sheets is getting updated with conditional formatting, which allows people to create special conditions for cells that meet some sort of criteria or other. This has long been a feature of the web editor, but it’s now available on the mobile side of things, making it nice and easy for users on the move to make edits to that perfectly-formatted spreadsheet with their smartphone or tablet. With this new update, users can not only edit cells and keep the conditional formatting alive, but also create new ones, too.

Both of these updates should be rolling out to users right about now, but for those impatient out there they can download the update for Google Docs here and the Google Sheets update here. While the not the most exciting updates that we could have been given to close out the week, it’s nice to see that productive tools like these are still being updated by Google. 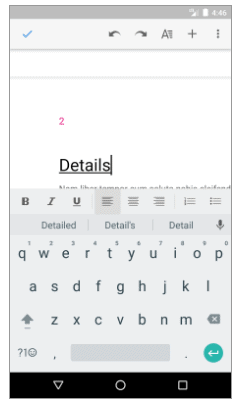